Protesting for democratic change in Georgia

Born out of the protests that shook Tbilisi in June 2019, the civil society-led Shame Movement is on the frontline of advocating for democracy and social change. 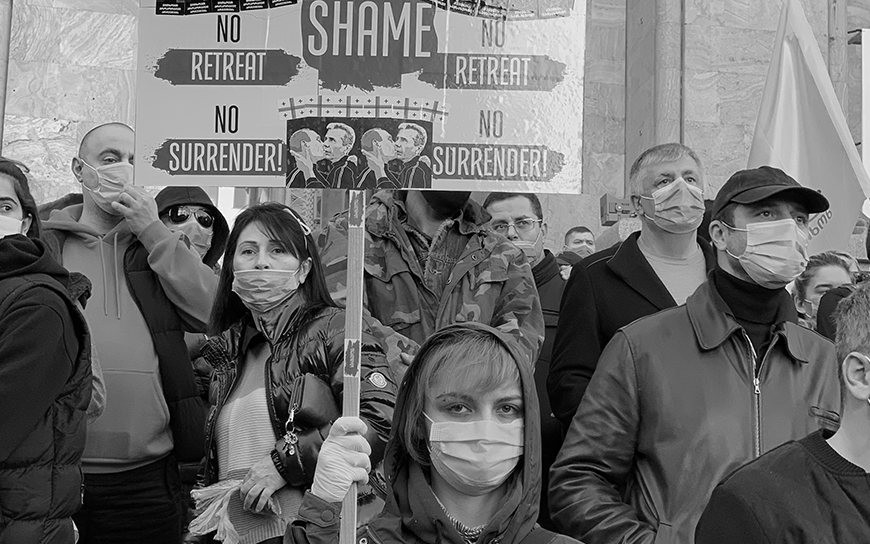 The Shame Movement emerged during the summer of 2019, when Georgians took to the streets for three consecutive months, initially in protest against the visit of a Russian lawmaker in the Georgian Parliament – Russia has occupied the Georgian regions of Abkhazia and South Ossetia since 2008 – and then in reaction to excessive police violence during the first protest.

Over the past year, the Shame Movement has consolidated itself as a group that unites representatives of liberal pro-European civil society determined to bring positive change in Georgia. The group has been focused on the parliamentary elections, held on 31 October.

The movement was particularly concerned about possible vote falsifications by the ruling Georgian Dream party, in power since 2012. In the first round of the elections, there were allegations of voter fraud, and when the Georgian Dream won an alleged 48 percent of the vote, the Movement and the political opposition refused to recognise the election as legitimate.

Together with other civil society organisations – including EED partners Democracy Research Institute and Governance Monitoring Centre – the Shame Movement signed an appeal demanding a recount of the votes.

“We were also concerned about the increase in physical attacks against opposition members and the control that Georgian Dream has on the main TV stations,” explains Giorgi Mjavanadze, co-founder of the Movement, in conversation with EED. He similarly notes that the ruling party has been linked with Facebook pages controlled by far-right groups, whose role is to spread misinformation and fake news.

It is noteworthy that while OSCE ODIHR found the elections competitive and fair overall, it also highlighted many allegations of pressure on voters and the ‘blurred lines between party and state’ during the electoral campaign, which reduced public trust in the democratic process. 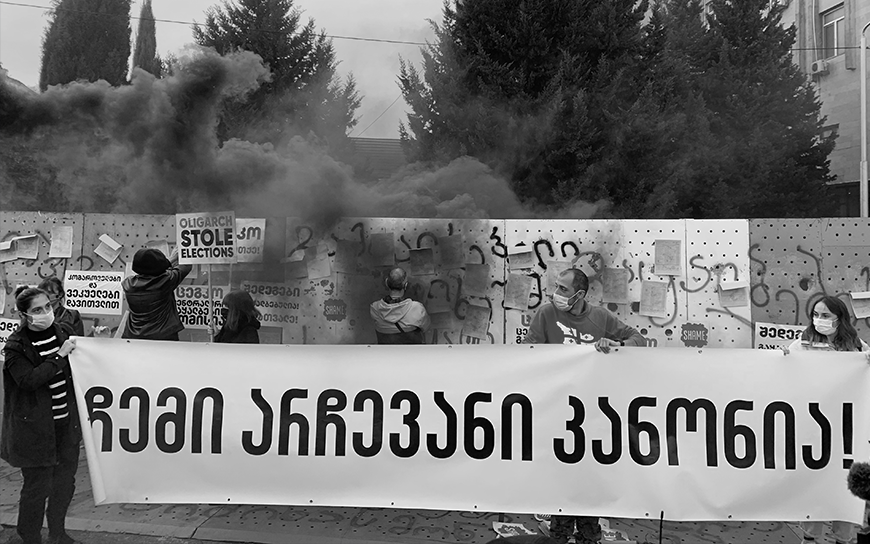 The opposition’s protest held in the week after the election were met by riot police and water cannons.

The Shame Movement also held a protest defying the curfew imposed by the government on 9 November, as they believed the Georgian Dream was using Covid-19 as an excuse to curb freedom of assembly. Three Shame Movement protesters, including Mjavanadze, were arrested during this protest and was sentenced to three days in jail. He accused the police of physically and verbally assaulting him. According to a fellow activist, Mjavanadze had multiple bruises on his body upon his release.

Mariam Bajelidze, Mjavanadze’s wife and co-founder of Shame Movement, relates that his arrest was a very hard experience for them. She stresses that the Movement is not interested in violent protest, but only in peaceful change. “We are afraid of another revolution, we don’t want it. We don’t want our people to die in the streets,” she says.

Two other Shame Movement members were injured during the protests – one had her hand slammed in a car door while trying to help a friend who was being arrested by the police.

The opposition decided to boycott the second round of elections, held on 21 November, and as a result the turnout was a meagre 26 percent.

Following this second round of elections, the Movement’s demands have changed. They are no longer demanding a recount of votes; they want snap elections, which they see as the only way out of this crisis. They are well aware that this will not be easy. “The government does not want to concede snap elections with international observers, because they will lose them”, explains Bajelidze.

Georgia on the brink of an economic crisis

The situation is further complicated by the Covid-19 pandemic. Georgia imposed a second strict lockdown in late November, when the number of new daily cases reached a peak of 4,780. This means that the Shame Movement has been forced to halt all in-person protests, even as more and more people are expressing their dissatisfaction with the government.

Georgian citizens are being hit hard by the economic crisis. Many small businesses have gone bankrupt, and street vendors, whose activities were forbidden were met by tone-deaf comments by the government, who encouraged them to start selling their products online, even when this was not technically or economically viable. Salaries remain low, averaging €300 per month. Government aid is negligible. In response to increased hardship among the population, the Shame Movement activists have now started a food distribution programme to people in need in Tbilisi. 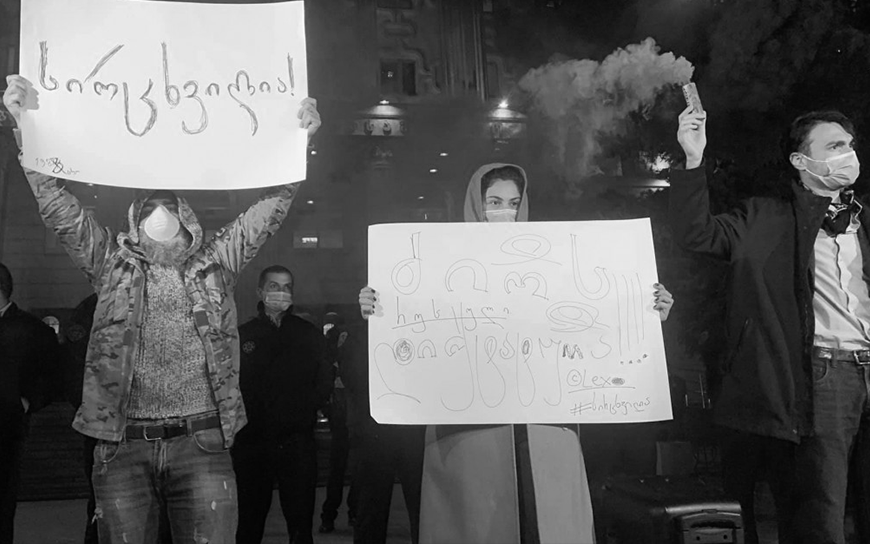 The Shame Movement has had a number of successes over the past year. Despite the current situation, the elections were already a success for the Movement. They were the first elections held under the new, almost entirely proportional electoral system, which was one of the protesters’ main demands last year.

“With this new system, it will be almost impossible for any party to reach the majority needed to change the constitution. This will force them to cooperate, and raises the chances to have a coalition government in Georgia for the first time since independence,” explains Mjavanadze.

The Shame Movement was determined to capitalise on the success of last year's protests and to increase citizen’s participation in political and civic life. They were particularly interested in engaging young people, who are historically disinterested in politics, but had come in large numbers to last summer’s demonstrations. They were the main target of the Movement’s ‘Get Out the Vote’ campaign held in the pre-election period.

“Young people don’t think that their opinion matters, and we wanted to convince them of the contrary using a language they can understand and connect with,” relates Bajelidze. Their campaign consisted of social media videos that targeted people aged 18-35. It eventually reached 1,200,000, both young people in the regions as well as in Tbilisi, where political activity is higher.

The campaign had positive results. The first round of elections saw a voter turnout of 56 percent, a five-point increase from 2016, despite the constraints posed by the pandemic. A recent survey also shows that the number of people in Georgia, who believe that citizens’ participation in public life is important has risen from 28 percent to 40 percent in just one year. 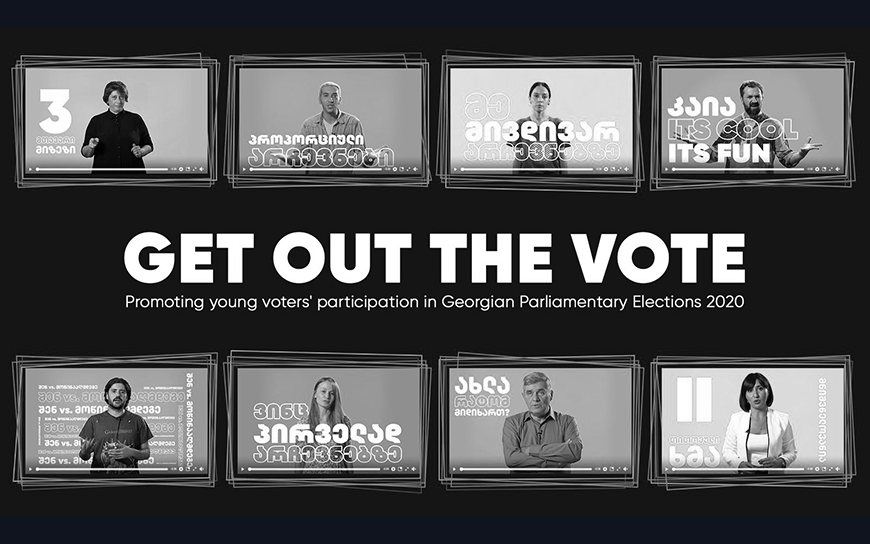 The future for Shame Movement

In the current political situation, it is difficult for the Shame movement to make long-term plans. EED funding allows them to continue monitoring the reform of the judicial system, producing a series of video explainers to shed light on this needed reform and on how it will affect the investment climate in the country.

There is also a possibility that individual members might go into politics. “We can see ourselves as evolving into a political movement, although we haven’t decided yet if we want to take this leap or if we prefer being an organisational force within civil society,” muses Mjavanadze.