Serbia has never been an easy place to be a journalist but six years under the current President and former Prime Minister Aleksandar Vučić have made life as an independent journalist that much more precarious. 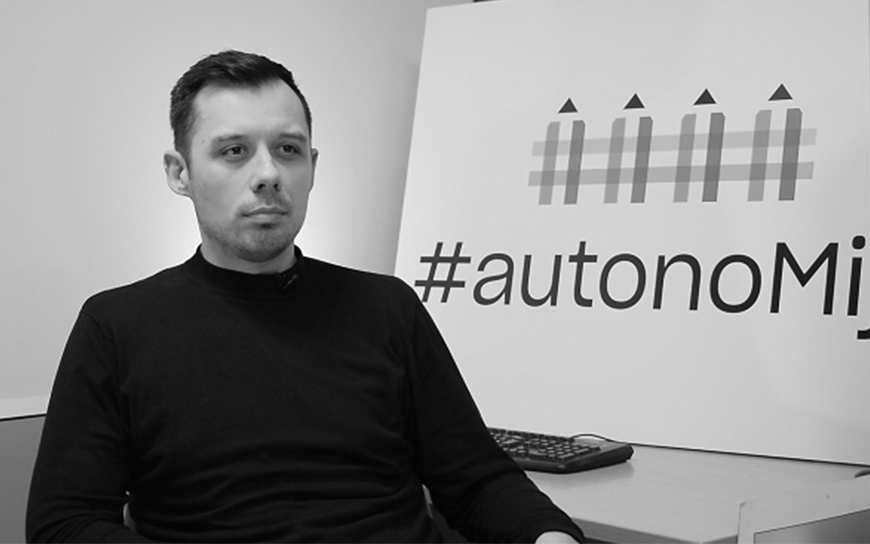 According to the Independent Journalists’ Association of Vojvodina (IJAV)’s president, Norbert Šinković, Serbia is now a country where it is dangerous to work as a journalist and where fake news is not only tolerated by the government, it is propagated. In fact, there is a state-sponsored hate campaign against journalists who are labelled as traitors and opposition sympathysers and where censorship is a constant in journalists’ lives.

IJAV has a long history in Serbia. Founded in Novi Sad in northern Serbia in 1990, the first independent union for journalists in the former Yugoslavia then under attack from the Slobodan Milošević regime, it came to prominence during its initial years for its Prozor (or Window) action. Each night, members read the ‘real news’ of the day from their office balcony, a riposte to the propaganda broadcast from Milošević’s state media.

Over the years, IJAV has continued its role of providing support for journalists and acting as a watchdog to the government. Any journalist can join the Union, as long as they sign up to IJAV’s mandate of independent journalism and code of ethics. As a member of IJAV, a journalist is perceived as ‘clean’ as Šinković puts it – they are not a propaganda tool.

Šinković explains that IJAV is engaged in empowering up-and-coming journalists. They run a 10-month internship programme with modules on ethical journalism, the role of the media, the role of the citizen in media, as well as on digital media skills. In his view, this training programme is an important initiative for the future of media in Serbia. During the recent June elections, the interns ran a live blog on social media, reporting on the election via their mobile phones, the first such initiative in the country.

He explains that media literacy is a big issue in Serbia. “There is a wide-held belief that in the age of social media, anyone can become a journalist. But when you think about it, training to be a journalist is no different from becoming a doctor or a teacher. You need to be taught how to do the job properly. We want to develop a new media scene, where we empower local journalists and grassroot initiatives and where we develop proactive citizens, who share information and report it to journalists, and who trust journalists,” he relates. 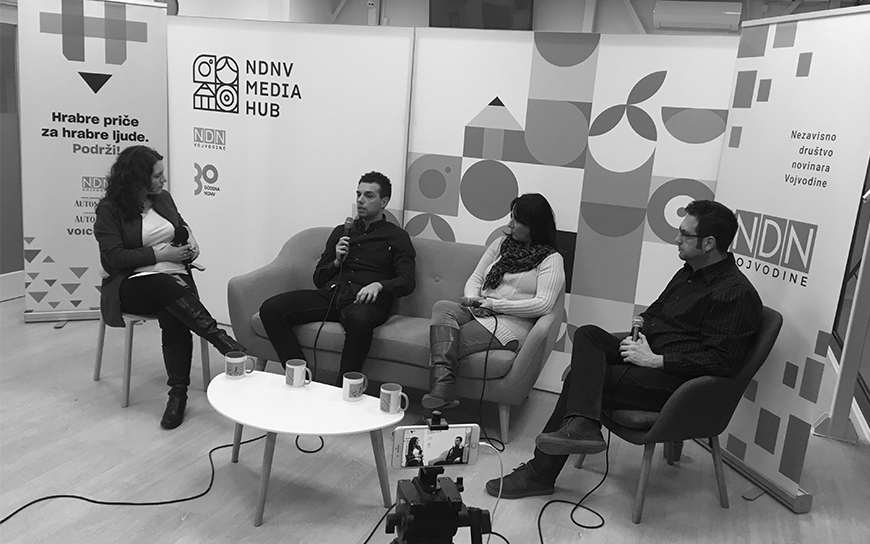 The Covid-19 crisis has seen a further sharp decline in media freedom in Serbia. The government declared a State of Emergency in March and all citizens were instructed to stay at home between Friday and Sunday each week. This strict lockdown made it very difficult for journalists to work. Many have lost their jobs in recent months, as a collapse in advertising revenue has meant many independent media have had to close down.

In mid-March, the government then declared that all information on the Coronavirus pandemic was to be centralised and its officials were forbidden to speak with journalists. It was at this point that Ana Lalić, Nova.rs journalist and IJAV member, was arrested following the publication of her article exposing the shortage of PPE equipment for medical workers in the Clinical Centre of Vojvodina.

Šinković describes the next two days as among the most difficult of his professional life. “We focused all of our energy on pursuing her case. We didn’t sleep. We contacted all the embassies and our lawyers to put pressure on the authorities. We had to organise this campaign online as protests were forbidden during lockdown. Thanks to our efforts, she was released 48 hours later,” he relates.

However, Lalić’s release from custody did not mark an end to her troubles. Šinković describes a concerted harassment campaign against Lalić with paid advertisements placed on social media and on popular children’s mobile phone games accusing her of being a liar, anti-Serbian and anti-Serb. IJAV fought back and according to Šinković, they were ‘everywhere’ in the following days and weeks across all Serbian media channels. Finally, the authorities had to step down on their centralised information policy. While they did not admit their reasons for doing so, Šinković is convinced that IJAV’s actions played a significant role in this decision.

He sees this success as a glimmer of hope for the future of Serbian media. “We saw that we could mobilise our society. We explained that the government had crossed a red line. I now believe that when it comes to media freedom, Serbian society is not a lost cause,” he relates.

During recent months, IJAV have been active in helping journalists continue to go about their professional activities. With funding from EED, they purchased PPE equipment and distributed this to local journalists. They developed public health guidance for journalists on working in a Covid-19 environment. They run a legal aid programme and provide online psychological support to affected journalists. 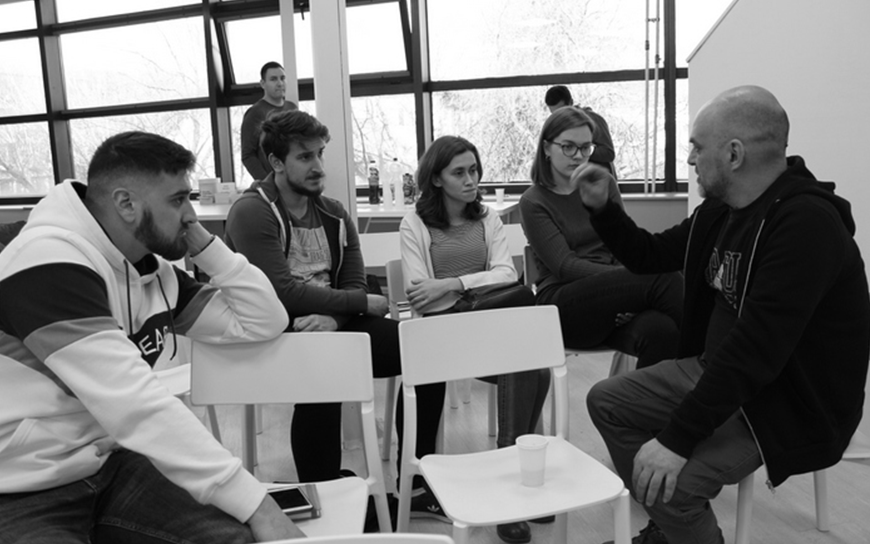 IJAV have also launched a number of new projects. A popular podcast show ‘Reaguj’ (Act) presented by young journalists covers a range of issues of relevance to local communities. They are developing a multi-media project ‘Faces of Crisis’ featuring in-depth interviews with 12 individuals whose lives have been affected by Covid-19 focusing as much on the economic and social effects of the crisis as on healthcare issues.

IJAV approached EED for emergency funding in 2019 when it looked likely that the organisation faced closure. “Our previous office was in very poor condition and we had no money to pay for refurbishment or to pay our staff. With EED assistance, we located and revamped a new co-working space with a media hub for our members. We have also restructured the organisation to make it more democratic, and we now have a Board of Management, an Executive Board as well as a Board of Transparency.”

Šinković relates that in May, two months after the declaration of a State of Emergency, the government finally organised a meeting of the Assembly as required by the Serbian Constitution to make such a declaration. One of the main speeches made during this meeting was a diatribe against the work of independent journalists.

In response, the IJAV sent their Code of Ethics to the Assembly. They have also developed a new page on their website, where they published all documents on IJAV’s finances and projects. “We are doing what we can to fight back against the inflammatory rhetoric against journalists and newsrooms. We want to show that we are fully transparent.”

In recent weeks, Šinković reacted strongly to demands by a department of Serbia’s finance ministry tasked with money laundering and terrorism for dozens of individuals, NGOs and media organisations working on human rights, transparency and exposing corruption to provide all their bank data. “I am not against checks and balances,” he said, “But it is clear that once again, this is another way to put pressure on independent media and journalists. It is an abuse of political power.”

He firmly believes that for the future of media freedom in Serbia, international actors must continue to exert pressure on the authorities to defend media freedom and human rights in the country.

As he sees it, there are two options for independent journalists in Serbia. “We can give up. Say that’s it. We’ve lost the battle. Or we can keep on fighting, try to build new connections and new ways of communicating with people, and new trust.” Despite the odds, he and his fellow-IJAV members are determined to follow the second road, but they are prepared for a tough battle ahead.