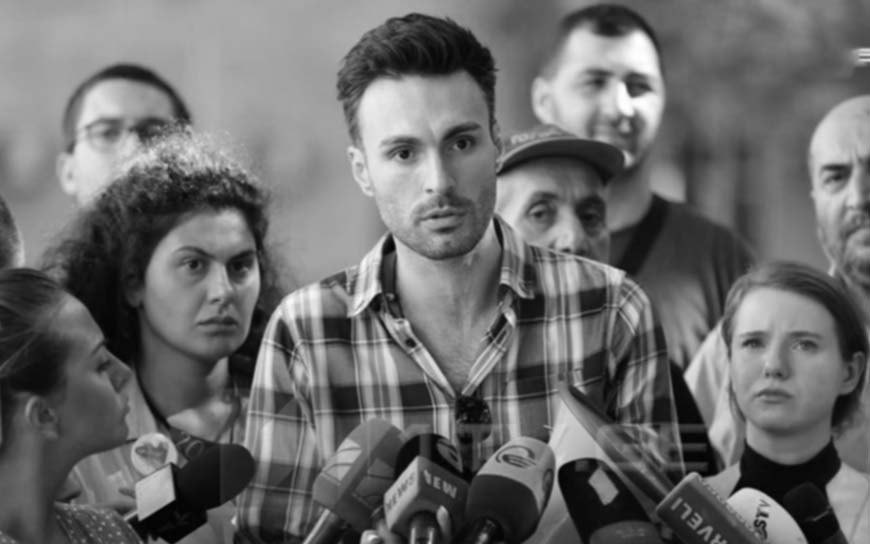 Shota Dighmelashvili is one of leading organisers of the popular peaceful protest moment that has taken Georgia by storm; a protest movement that has adopted the name ‘Shame’ and is led by a group of young middle-class intellectuals and professionals determined to start real conversations about Georgia’s future.

A calm unassuming young man whose usual garb is casual open-necked shirt and slacks, Dighmelashvili never set out to be a protest movement leader. He originally wanted to be a mathematician, although he switched to Economics at university as it seemed more applicable to real life. He has led a varied career to date, working in finance, as a copywriter, television presenter and editor, and even today he is still executive editor of the Forbes Georgia magazine.

Dighmelashvili always attended the demonstrations; he explains that he believes that everyone has responsibility for trying to make their society a better place. One day, he happened to take the microphone to speak - It seemed a natural thing to do, he says. And he rapidly emerged as one of the leaders of protest movement.

The Shame Movement was sparked by the visit of a Russian lawmaker and Communist Party member Sergei Gavrilov, who spoke from the parliamentary speaker’s chair during a meeting of politicians from predominantly Orthodox countries on 20 June 2019. Gavrilov’s appearance touched a nerve in a country that fought a war with Russia 12 years ago over the breakaway republics of South Ossetia and Abkhazia and broke Georgia's anti-occupation law; Russia continues to occupy 20 per cent of the country.

Activists immediately staged a large demonstration in front of the Georgian Parliament. The protesters were violently dispersed by police with teargas and plastic bullets injuring over 240 people, including 40 journalists. Two people lost eyes in the crack-down. A further 300 people were detained.

As Dighmelashvili tells it, this demonstration was a peaceful protest that was then infiltrated by opposition parties, who in his view, mismanaged the event, and an angry crowd then tried to storm parliament.

The next day, Dighmelashvili and other leaders of movement made sure to take back control and to distance themselves from the opposition. They started peaceful demonstrations that were to continue for 100 consecutive days. In common with many other like-minded Georgians, Dighmelashvili believes that the Georgian government is in a subservient relationship with Moscow and views the mainstream opposition, a party led by former president Mikheil Saakashvili, as just another part of a discredited establishment.

'We are against one-man rule' 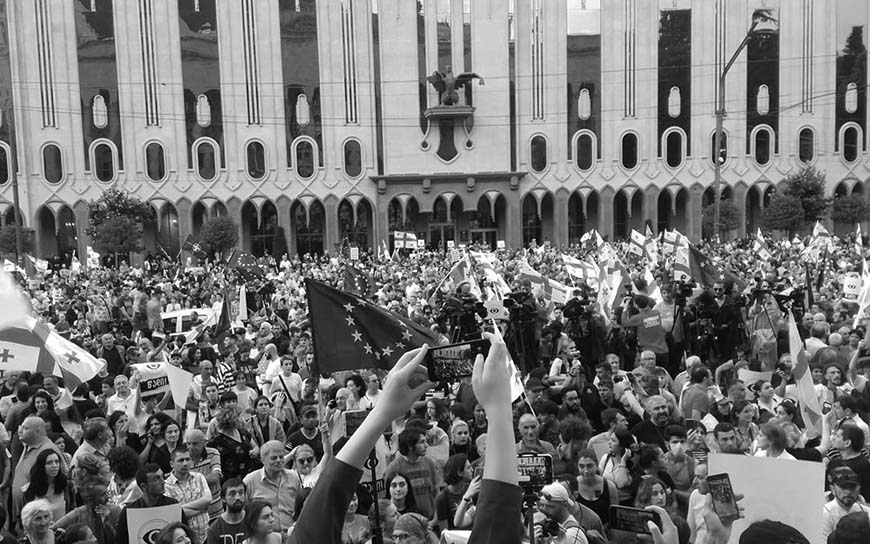 “We grabbed back our stage. We told the opposition parties that they could participate under our terms and conditions. We are not just against the ruling Georgian Dream party. We are against the one-man rule that is Georgia’s main problem and is the reason for the endemic corruption and lack of transparency in our country. We demanded that the government change the electoral system to a system of proportional representation, and we demanded the resignation of Giorgi Gakharia, who ordered this violent crackdown on our peaceful protest, and we demanded the relase of political prisoners,” he relates.

He notes that one of the problems with the current system is that it gives an unfair advantage to the ruling party. For instance, in the 2016 parliamentary election, the Georgian Dream only won 38.7 percent of the vote, yet it won 77 percent of seats.

But things do not work quite like that in Georgia. In September, Gakharia was promoted to the position of prime minister. And following many further weeks of demonstrations outside parliament, in November, the Georgian Dream government backtracked on promises made in June to reform the electoral system by introducing a proportional representation system in the parliamentary elections of 2020.

In response, tens of thousands of protestors took to the streets of Tbilisi, blocked traffic and pitched tents in the city’s central Rustaveli Avenue, their tents festooned with photos of Bidzina Ivanishvili, the billionaire head of the ruling Georgian Dream party, whom protestors blame for pushing back on the electoral reform. Once again, the authorities took a heavy-handed approach using both teargas and water guns to disperse the crowds and arresting dozens of people.

Arrests made under the 'administrative code'

Dighmelashvili relates that the authorities have adopted various efforts to try to stop these protests. The majority of arrests are being made under the 'administrative code', or as it is officially known, the Official Compilation of Rules and Regulations of the State of Georgia, legislation that dates back to the Soviet period and allows the police to arrest protestors for any reason and to keep them in custody for up to two weeks. A smaller number of individuals, among them politicians, have also been arrested on criminal charges.

He cites this administrative code as particularly troubling. “The authorities are using it as a tool to discourage young people not to go out in the streets. You don’t need to do anything. It’s a lottery. If the police don’t like the look of your face, they arrest you. And over the past few months, fines have increased hugely. Before the protests began, fines were about 400 lari, now it’s more like 2,000 to 3,000 lari on average. To put that in context, the average salary in Georgia is only about 1,000 lari per month,” he explains. In the past, protestors have also been arrested under Georgia’s draconian drug laws, where individuals can be jailed for up to 20 years for possession of even the tiniest amounts of recreational drugs.

Dighmelashvili too was arrested previously. In 2008, he was arrested under the administrative code for allegedly ‘resisting police’, although video footage of the arrest showed he did not resist in any way. He is often the subject of negative coverage in the state-controlled media and social media.“They are preparing the ground. If I get too dangerous, they can act,” he says. He admits that his parents worry for his safety.

The system itself is unfair 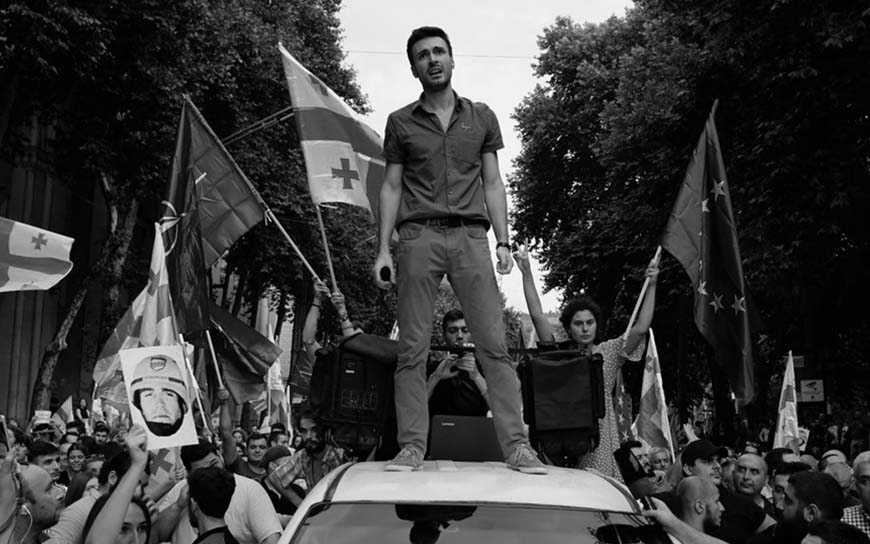 When asked why he and other young Georgians are so incensed, Dighmelashvili is clear.

“It’s hard to bring people out on to the streets with a message of proportional representation, but people understand that the system itself is unfair. It is unfair to have a constitutional majority as the Georgian Dream do today, when in fact less than 20 percent support them, as shown by polls conducted by NDI and Edison Research. People are mad about everything. There is nothing for young people in Georgia today. More than 25 percent of young people are unemployed and they can see no future for themselves here. With the current economic growth of about 4 percent per year, it would take Georgia 60 years to catch up with the poorest country in the EU by GDP per capita, Bulgaria. That’s two generations. The members of the Shame Movement have the same dilemma as everyone else. Maybe we should emigrate too? Maybe that would be better for our families? But we chose to stay and to try to change things for the better.”

The father of a young son, Dighmelashvili admits that fatherhood has been a huge personal motivator in this fight for a better future for his country. He remembers when he was a school boy in the 1990s, how his father and his friends would discuss the then chaotic situation of Georgia and would tell him it would be a better place when he grew up. “I find myself thinking the same today, hoping that Georgia will be a normal country when my son grows up,” he admits.

Dighmelashvili and many of the other protest leaders have been involved in civil society for several years already. He is an active participant in Squander Detector, another EED-funded initiative, that investigates spending of public funds and publicises its findings via social media, drawing data from work carried out by other NGOs and think tanks as well as carrying out their own investigations.

He tells of a recent story they broke about a roof that collapsed on a metro station in 2018. They revealed that it was built by a construction company, which had won the construction tender despite being blacklisted previously for shoddy construction. They were also able to prove that the company had links with corrupt officials. The same company went on to win further tenders including for the maintenance of a school building and construction of an emergency medical centre.

Asked about his plans in this a parliamentary election year for Georgia, Dighmelashvili is adamant that the protest movement will remain a peaceful civic society movement and will not become political. “We want to remain equal partners with the opposition but as civil society, because this is first time in recent history that civic society can really influence the political process in Georgia. We don’t want to lose that momentum. The civil movement empowers people. It creates a platform for young people who view politics as something dirty to become politically engaged without being actually associated with the political parties and the discredited establishment.”

He admits that the next few months of the pre-election period will be important for the movement, and that they will need to find the proper balance between keeping society engaged and politically motivated, as well as keeping opposition parties involved without discrediting the cause that brought them together in the first place.

Updates since this interview:

Disclaimer: This article reflects the views of the EED grantee featured and does not necessarily represent official opinion of the European Endowment for Democracy (EED)