Yuliy Morozov is a garrulous man brimming with ideas for his hometown, Kryvyi Rih. This industrial mining city – in what is known as the ‘steel heart of Ukraine’ – has recently come to international attention with the election of another of its citizens, Volodymr Zelensky, former actor and now president of Ukraine. 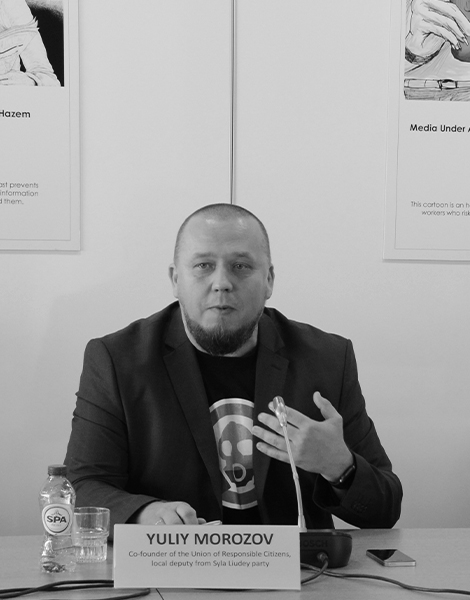 Yuliy Morozov is a garrulous man brimming with ideas for his home town, Kryvyi Rih. This industrial mining city – in what is known as the ‘steel heart of Ukraine’ – has recently come to international attention with the election of another of its citizens, Volodymr Zelensky, former actor and now president of Ukraine.

Kryvyi Rih is the eighth largest city Ukraine with a population of around 625,000 people. It is also Europe’s longest city, stretching over 126 kilometres in length to accommodate the new mines opened over its 200-year mining history. It is home to some of the largest metallurgical plants and ore mining factories in the country, and it is the main reason why Ukraine is the world’s sixth biggest steel exporter.

It is also one of the most polluted places in Ukraine with a poor standard of life for the local population, due both to miners’ low salaries and a mining and metallurgy industry that uses outdated technology, failing to modernise and paying scant attention to ecology. Poor infrastructure and public transport within the city limit people’s ability to travel and to form any sense of community.

Morozov is determined to improve his fellow citizens’ lot. He is a man with many hats and he has co-founded a number of initiatives to develop civil society within this industrial city, including the Union of Responsible Citizens, Stop Poisoning Kryvyi Rih, an ecological coalition, and Expert-KR, a media platform. When we meet, he is wearing a vivid t-shirt with the logo of the ecological coalition ‘Stop Poisoning Kriviy Rih’ underneath his sober blue business suit.

Morozov is not just a civic activist; he is also a politician, and a member of the ‘Syla Lyudey’ faction and deputy of the Kryvyi Rih city council. While he does not see himself as a natural politician, he considers that in the current circumstances, this is also an important role he has to play.

EED has supported the Union of Responsible Citizens since 2018. The Union is working to boost civic and political activism in Kryvyi Rih and in neighbouring rural communities. They support local projects, helping to empower groups of individuals who seek to improve their immediate environment with the aim of building networks of activists in the city. They are also working to develop political activism, as in Morozov’s view, for long-term change these civic activists need to engage in politics.

In a post-Soviet city such as Kryvyi Rih, paternalistic attitudes persist. As Morozov relates, many people don’t even realise that they can do anything to improve their situation and that they can influence local politics. He sees the role of his organisation as that of educating local people about their role in society and building local capacity.

The Union aids a wide variety of initiatives, ranging from small local infrastructure improvement projects, to event organisation, media projects, sporting initiatives and even small business projects. As far as they are concerned, if they feel the project is in any way useful to the local community, they can help. The only constraining factor is that they will not assist individuals; there needs to be some sort of organisation behind the initiative, given the Union’s wider aim of building wider networks within civil society. They don’t provide direct financial to these organisations, instead they find out what is needed and cover these expenses.

Above all, they see themselves as ‘flexible partners’, “If there is a need, we will help,” as Morozov puts it.

One of the Union’s most prominent success stories is 'Movement without Limits', a group of people in wheelchairs, many of these victims of mining accidents. Disabled people are often a forgotten group in regional cities such as Kryvyi Kih, but these men were determined to fight for their rights. The Union’s staff worked with the group and helped them write and lodge official complaints with the local authorities who were failing to implement new national disability regulations. One of the challenges faced in a regional city like Kryvyi Rih is that very often there is a significant gap between national legislation and its implementation at a local level.

For instance, by law, accessibility committees have now been founded in each of the city’s seven districts. The group was able to prove that many of these committees only existed on paper – often they were located on the third floor of buildings without lifts, utterly inaccessible to the people they were supposed to help.

The group began a campaign against the authorities’ construction projects where footpaths in the city were still being constructed with high curbs, despite new regulations that stipulate these should be accessible to wheelchair users. With the Union’s assistance, they organised a street press conference when they demonstrated just how inaccessible these new footpaths were and they destroyed one of the curbs with a hammer to make it accessible, a public relations stunt that attracted wide coverage in all the local and national media.

Now a year later, the group has registered their small NGO and are considered experts on disability legislation. They are frequently called upon to give interviews to the media and are consulted by local businesses looking for accessibility advice when they are opening commercial venues such as cafés.

Yuliy tells of another project in a nearby village called Radushne. This 4,000-strong village had never held a ‘village party’, a tradition in this part of the world. After some research in the village’s archives, residents settled on the village’s founding date and organised the first village party to mark its 88th birthday. The Union helped them find performers for the event, organised fireworks and helped set up a market of local handicrafts and produce. The villagers set up a Facebook group, which now has over 2,700 members.

This small initiative was a spark for these villagers to come together to work on other projects. Recently, villagers put pressure on the authorities to repair a bus-stop that had lain in disrepair surrounded by litter for a decade. Within days a municipal team was sent out to repair the structure.

Morozov explains that one of the challenges in Ukraine, and in Kryvyi Kih in particular, is that there is little culture of civil society cooperating with government, and activists typically mistrust government and politicians and are highly critical of fellow activists who then join politics. But as he puts it, “politics needs new faces.”

The Union is working to change such attitudes. “We need to change the face of politics. We need to move from a belief that people in power don’t understand local people’s problems to one where civil society has a right to be heard and is heard. Politics needs civil society’s experience so that together we can improve things. It is civic activists who can change politics; they don’t join politics to protect their own interests as many business people do.”

Politics is not easy anywhere in Ukraine, and particularly not in a regional city like Krivyi Kih. Zelensky’s recent political success has brought prominence to the city, but it has also made for a difficult time for many in politics.

We have been working for a long time to try to improve things in our city, and then one of Zelensky’s candidates comes along with no experience of working in our city and dubious motives. But voters don’t care; they just see the Zelensky brand and of course he gets 90% of the vote, and that’s very demotivating for others who have been working to try to improve our city and to develop a culture of politics over years and years.

With local elections due in late 2020, but expected much sooner due to the current popularity of Zelensky’s party, it is even more important than ever that new faces join the political process.

Morozov sees many challenges ahead for his city. Many young people are now leaving attracted by the higher wages in neighbouring countries like Poland. While unemployment remains low in the city, they know that the days of the metal mines are numbered. The city authorities are aware that the city needs to diversify economically and that strong leadership is needed.

He believes that the future of his city lies within this nascent civil society and within the small and medium sized businesses, who together can help grow the city’s political and economic future.