A space for artists without space

An Image Centre raised from the ashes of the August 2020 Beirut explosion is providing space for artists without space.

“Our centre was just fifty metres from the epicentre of the August 4 explosion,” says Manal Khader, Artistic Director of the Mina Image centre, recalling the horrific 2020 explosion that destroyed the Port of Beirut, tearing down and damaging buildings across the city, killing over 200 people and injuring thousands. “Thankfully no one was in the office as no one would have survived. We lost everything that day. We lost the space we had built with love.”

It was by pure chance that the Mina Image team were not at work that terrible August day. If all had gone according to plan, the centre should have been hosting an exhibition, but that was cancelled after the massive wave of protests that began in the city in October 2019, followed by the Covid-19 pandemic.

It took some time for the team to be emotionally and physically ready to revive the centre they had named in honour of Beirut’s famous port – ‘mina’ is Arabic for port – and that was founded by Lebanese photographer Fouad Elkoury with a vision of promoting the art of photography in Lebanon. 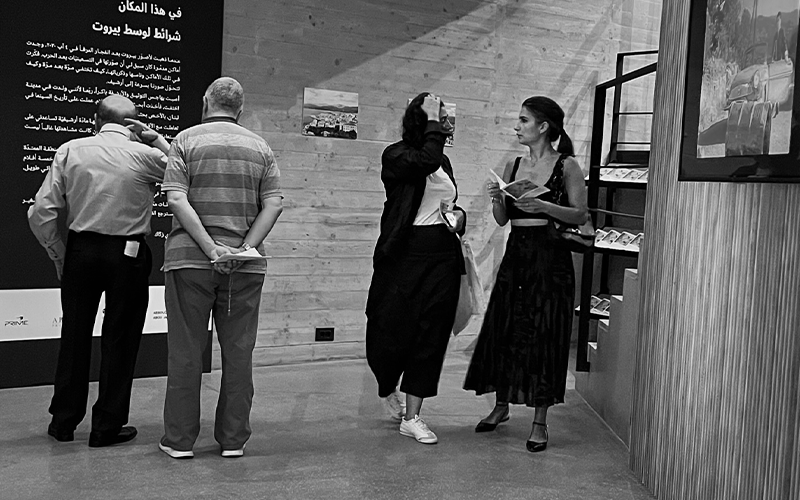 Mina Image: a space for the community

“We decided we needed to re-open our centre to provide a space for all those who are experiencing such difficult circumstances today. We wanted to help artists and engaged people,” says Manal. While the port area is slowly being restored, she admits too that at times the team wondered about the wisdom of rebuilding in an area that felt like a ‘ghost-town’. They just knew it was the right thing to do.

Mina Image reopened in March 2022 thanks in part to an EED grant covering core and programming costs and to different grants from Drosos, Prince Claus Fund, Afac for the restoration of the space. Manal has recruited a new team for the centre of young art lovers who are engaged both socially and artistically.

The new centre has a wider remit than that initially envisaged by Manal and her cofounder, Fouad Al Khoury in 2018. Now collaboration sits at the heart of Mina Image’s mission.

“We want to share our space with other people and organisations who have no space,” she says.

The centre has already run a highly successful ‘Reels of Beirut’ programme in June this year, with a focus on movies that featured the city before 1975, what many Beirut residents think of as the golden age of their city. Around 50 local and international feature films have been shown in the centre, and as part of the project.

The centre is now planning two further exhibitions, one with the Arab Image Foundation focused on bringing on old images of the city and giving them a new life, and a ‘Treat me like your mother’ exhibition, together with the Coldcut platform, that will have a focus on transgender issues. This exhibition will create the first archive of transgender images from the wider Middle East region.

A range of exhibitions and activism

Manal explains that the centre is now focused on art as activism as well as art for art’s sake. She recognises that in Lebanon art is often political in nature.

Now Mina Image is collaborating with a business consultancy, who are advising them on planning future financial security and on restructuring the centre. The centre is planning on opening a café and a bookshop. It also plans to have an atelier project, where they develop photos, sell etchings and provide framing services. They are also planning an auction of photographs in partnership with the auctioneer house Christies, and they are liaising with local artists to contribute towards a permanent exhibition.

In November, Mina Image will launch a Talent Hub, offering co-working spaces to eight talented artists for a one-year period. “We offer them space, electricity supply – something most people can’t rely on at home, and we have a reliable internet connection. We help them network with other organisations and plan for their financial futures. As a centre, we will also benefit from their projects,” she says.

It is not easy for any enterprise to survive amid Lebanon’s ongoing economic crisis, and Manal admits that survival of an arts organisation such as Mina requires being able to constantly adapt.

“We no longer work 10am to 7pm as we used to. We cannot afford the electricity costs. Now we work from 2.30pm to 7.30 pm, and we still pay over $2,000 per month to buy oil for our generator. But we survive, even if every project ends up more expensive than we plan.”

For now, securing Mina s financial security is the main concern. She is hopeful the centre might also attract an endowment from outside the country that could contribute towards the annual budget and enable it to plan and ensure some stability.