A Ukrainian activist, well-known for her activism work in Odesa, is now leading efforts to provide humanitarian aid from Romania to her hometown. 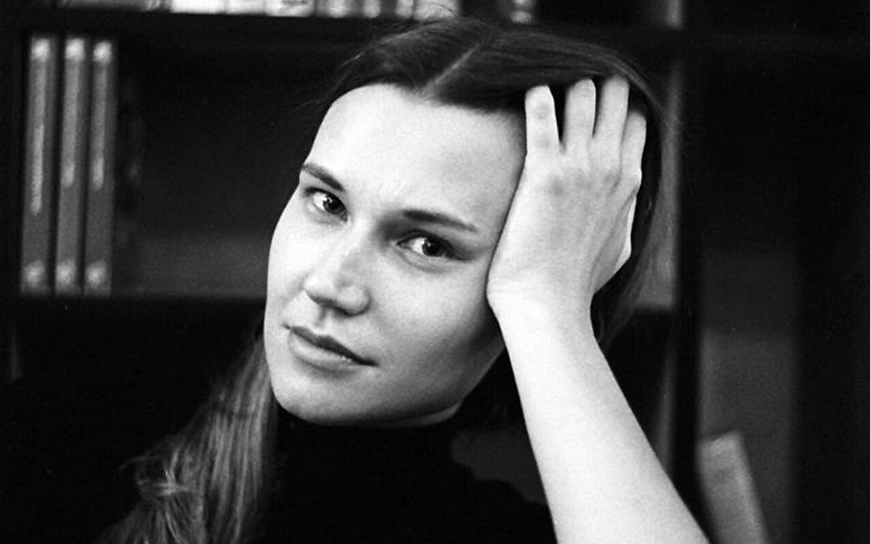 Inna Bilous is a young woman on a mission. Hers is a life devoted to improving the lot of the citizens of Odesa. A founder of the NGO Manifest Mira, set up after the 2014 Revolution of Dignity in Ukraine, she has long been a leading activist and campaigner.

Inna spearheaded a five-year campaign to ensure the renovation of Odesa’s once dilapidated Fine Art Museum. She worked tirelessly to ensure that the Odessan authorities launched the reform process to replace large residential homes, ensuring better care for vulnerable children. During the Covid period, she was one of the leaders of a civil society-business anti-crisis platform, that stepped up to fill the gap when the authorities failed to react.

Inna is also a mother of three young children, and with the Russian military invasion of Ukraine, she had to make the difficult decision to leave Ukraine in the early days of the war.

“We left Odesa on the first day of the explosions. Our plan was to travel to Slovakia, but when we arrived in Constanta, we knew that we had to stay here. Constanta is the nearest port to Odesa. It is a highly strategic location,” says Inna Bilous of her arrival at the Romanian Black Sea port of Constanta.

Noting that there were no humanitarian hubs operating in Romania when she arrived, she and some friends immediately began to collect humanitarian items and sent them by land back to Odesa. It was haphazard work at first, until the group decided to collaborate and work from one warehouse. They now run a fully operational humanitarian hub in Constanta, and they liaise with the Odesa humanitarian volunteer centre, which collaborates with local NGOs, businesses and the Odesa City Council in the provision of aid. 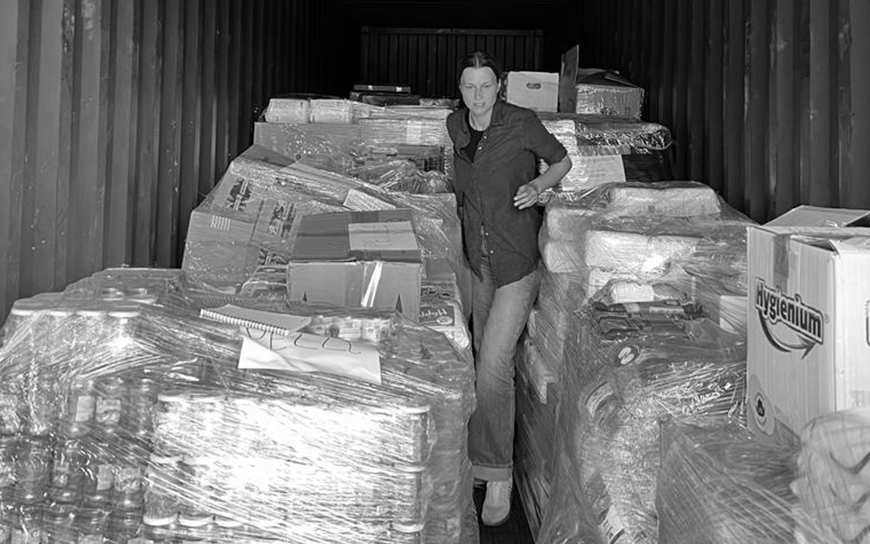 A network of Ukrainians working together

During her previous advocacy work, Inna has frequently clashed with the city authorities. Today, as Ukraine is at war, the Odesa City Council is collaborating closely with Manifest Mira, the Odesa Humanitarian Volunteer Centre, and a network of other partners to ensure a constant flow of aid into the city. Inna insists that her group maintain their independence.

“They know we understand logistics and we can get things done. They have given us access to the Odesa City Council’s CRM system to manage requirements and deliveries. The authorities sign export documents and we ensure everything is above board. Our team receive goods and sorts them. We store them here and we organise transport to Odesa together with a network of partners. The fact that we are accredited in Ukraine is a huge plus, as most of our partners here have no accreditation,” she says. EED support is ensuring the ongoing operations of this hub, by supporting the team and the overall coordination work.

Manifest Mira receives goods from across the EU. “We mostly receive food, hygiene products and medical supplies. We pay to transport goods and to store them, so we make sure we only receive what is needed. Last week, for instance, there was an urgent need for medical equipment. At the moment, we’re not keeping winter clothes, as we don’t have the storage here. We refuse some items, like water that costs a lot to transport and is far cheaper in Romania,” she says.

Speaking with EED, Inna’s camera pans to the boxes of aid in the warehouse waiting to be sorted, and other boxes waiting for collection and transport into Ukraine. The materials are sorted by volunteers, Ukrainian refugees, who like Inna and her family, also fled the war in southern Ukraine. “They want to keep busy and to do something useful,” she says, introducing two smiling young women: Anna, who manages processes and assists refugees in the city; and Yulia, who looks after accounting and paperwork.

She relates that transporting these humanitarian goods into Odesa is constantly challenging, involving many partners, different vehicles and often complex arrangements. 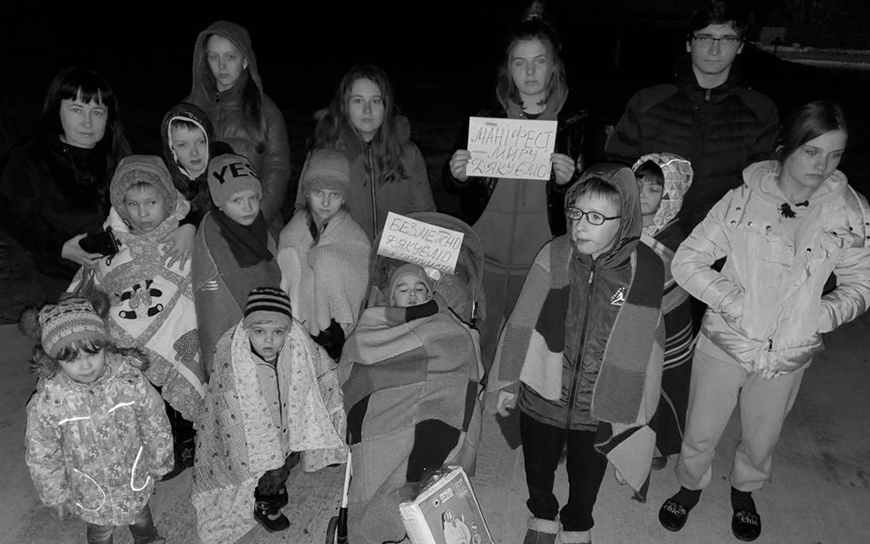 Manifest Mira have also assisted in evacuating people from Odesa and the wider region, in particular disabled children, who they relocated to medical facilities across Europe.

With each evacuation out of Odesa, the team send in more humanitarian goods back into the city, with the buses stuffed with humanitarian aid on the trip back to Ukraine.

She is also grateful for the assistance of the Constanta city authorities, who also provide humanitarian aid and are assisting with the evacuations of refugees to Romania. 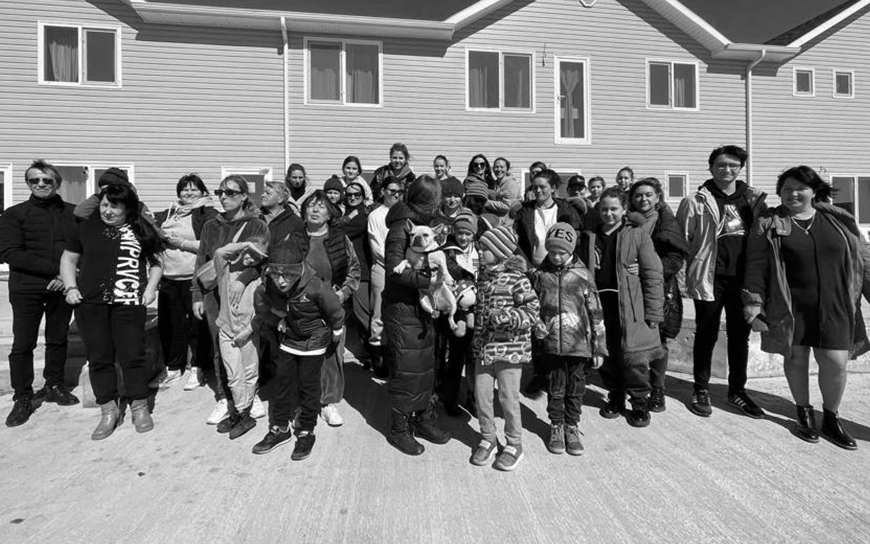 Unfortunately, life in Constanta is becoming more difficult at the onset of summer with local hotels preparing for their first tourist season after two years of a forced Covid-hiatus. Accommodation costs in the city are soaring.

“We are helping Ukrainian refugees here too. We give them food and we help them find accommodation. Many refugees now need to move on from the hotels where they have lived the last couple of months and we have just found a sports hall which we are setting up as a temporary shelter. Local businesses have donated beds and mattresses. In high season, my family also faces a bill of up to €2,000 for rent. We don’t have that kind of money, but we really need to stay here,” she says.

She admits that despite her current work in Romania, she cannot stop worrying about the plight of the many vulnerable children sent home from state institutions at the beginning of the war, as the reform of residential institutions stalled.

Inna has long led an advocacy campaign to force the Odesa authorities to implement a 2017 Ukrainian De-institutionalisation Reform Plan of children’s residential institutions. This plan aims to ensure that the 3,000 children in residential care are re-homed in more appropriate housing and that fewer children end up in institutional care in the first place.

“I regret that we were never able to finish the reform process. There is no information about children who are living in rural areas where there are shortages of food and mass unemployment. We’re trying to put together a list of families and to get local people to bring food to them,” she says.