After spending more than a year behind bars and enduring what they describe as horrific abuse at the hands of their captors, Leyla and Arif Yunus are still reeling from their ordeal. 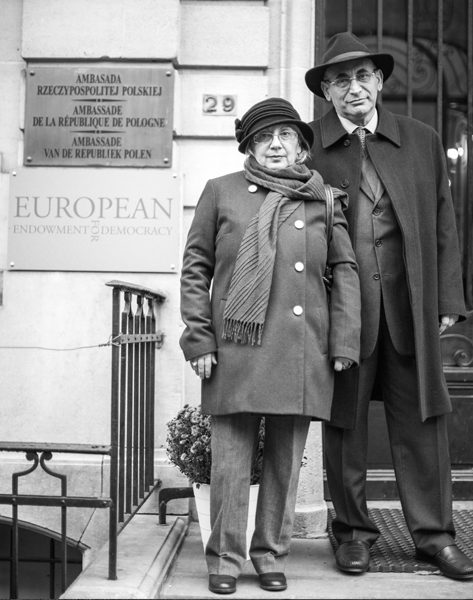 The Yunuses, two of Azerbaijan’s most prominent human rights activists, were released in late 2015 after being initially sentenced to lengthy prison terms on trumped-up charges of fraud, tax evasion, and illegal business activities.

Despite their frail health and reluctant departure from Azerbaijan in April 2016, the couple remain defiant.

They have resumed their advocacy work and are now planning a new book that will point a damning finger at the regime of Ilham Aliyev, who has ruled the oil-rich country with an iron fist since taking over from his father, late President Heydar Aliyev, in 2003.

“We were beaten and tortured, they stole our health,” says Leyla Yunus. “They freed us only because we were dying and they got afraid. What we saw, what we went through, must be told.”

From their new home in Amsterdam, Leyla and Arif Yunus, who is also a respected historian and scholar, continue to champion the rights of political prisoners in Azerbaijan. According to their estimates, at least 166 people are currently imprisoned for their views in the country and a dozen people die of torture every year in detention.

The group headed by Leyla Yunus, the Institute for Peace and Democracy, has kept close track of politically motivated arrests in Azerbaijan for more than 20 years.But while international human rights organisations take a keen interest in her findings, she says Western politicians have been mostly indifferent to the plight of political prisoners and to the broader crackdown on dissent in Azerbaijan.

“In Soviet times, we didn’t need to explain to the West what the Soviet system was, what the Gulag was,” she laments. “Today, when we talk about torture, when we explain what kind of dictatorial regime rules Azerbaijan, we need to provide a multitude of examples. And still, our words fall on deaf ears.”

In addition to lobbying for their release, Leyla Yunus has been writing to jailed dissidents for many years. She says this activity has taken on a new dimension for her since her own incarceration.

“I tell them that they are not forgotten, that we still care about them, that international human rights organisations are aware of their case,” she says. “It’s vital to support these prisoners psychologically. We were in prison ourselves, so we know how they feel.”

The book, however, is now their top project.

Financed through an EED grant, it will look back at their 30-year crusade to document human rights abuses in Azerbaijan. Some chapters will be based on notes which Leyla Yunus was able to smuggle out of prison.

“It will blend academic observations and personal testimonies,” she explains.

The book will detail the physical and psychological abuse to which the couple were subjected in prison. Leyla Yunus, who suffers from diabetes, was beaten, denied proper medical care, and threatened with rape. She was dragged by her feet into solitary confinement and lost part of her vision in one eye. Her husband, too, sustained permanent damage to his health as a result of repeated beatings and torture.

“This is a souvenir from prison,” he says, pointing to the splint on his left arm. “They tied my hands behind my back, hung me up by the handcuffs, and beat me on the back and on the neck with wet towels. This causes terrible pain in the wrists and in the back, and it also twists the elbow joints.”

Arif Yunus, who suffers from chronic hypertension, has had regular fainting spells since being detained – including during his court trial in Baku. Doctors have warned him again dwelling on his time in jail, an obstacle he says he will have to overcome in order to write the book.

“When I start remembering what happened to me in prison, my blood pressure skyrockets and I have sudden, severe headaches,” he says. “It will be hard for me to write this book, but not writing it would be even harder.”

Leyla and Arif Yunus say their book is intended both for foreign audiences and for human rights defenders, lawyers, journalists, and others facing arrest in Azerbaijan.

“It will be a testimony from witnesses,” he says. “Among other things, I want to write about my experience in an isolation cell, I want to describe interrogation methods and share advice on how to cope in such situations.”

For the Yunus couple, this project also represents a precious lifeline as they try to adjust to their new life in exile.

It’s very difficult to start over at 60; when you are forced to leave your homeland, a piece of your soul stays behind,” sighs Leyla Yunus. “EED’s grant proposal came like an outstretched hand at a time when we had lost everything. This book gives us a new reason to live."