A new initiative is creating university clubs for LGBTQI+ students throughout Turkey. Now it is focused on building student political engagement. 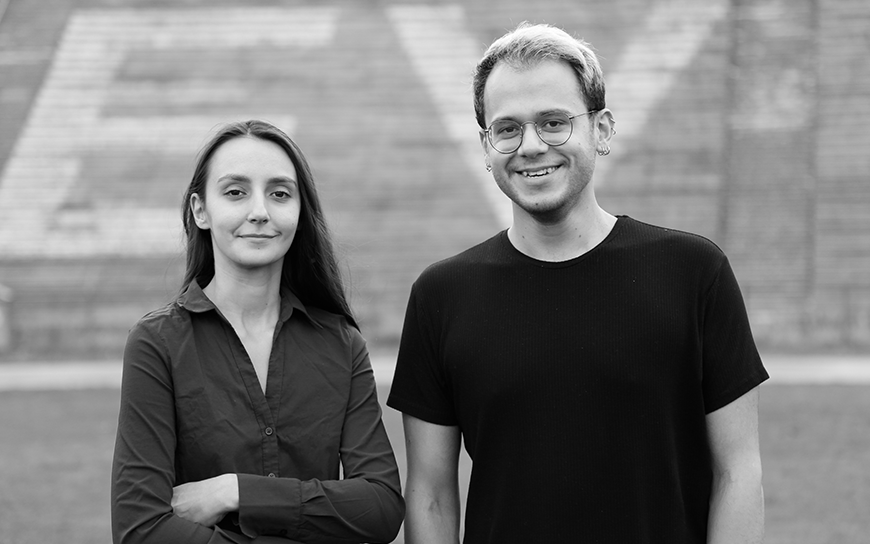 This April, two Ankara natives and LGBTQI+ activists, Melike Balkan and Özgür Gür, founders of the NGO ÜniKuir, will travel to Middelburg in the Netherlands, where they will be presented with the prestigious ‘Four Freedoms Medal’ award that is given annually to individuals ‘whose achievements have demonstrated a commitment to those principles President Roosevelt proclaimed in a historic speech to Congress on January 6 1941 as essential to democracy’.

“This is only the second time that a Turkish activist has been conferred with this award and the first time an LGBTQI+ organisation has received the award. We are being noticed by the international community,” says Melike, speaking to EED from ÜniKuir’s office in Ankara.

From biology students to activists

The duo’s road to international recognition has been a bumpy one. Özgür and Melike first became involved in LGBTQI+ activism when they enrolled at the Ankara-based Middle East Technical University (METU) in 2014. They joined the university’s’ LGBTQI+ solidarity group, the oldest such club in the country. Founded in 1996, it has organised an annual Pride march in the city since 2010.

In those days, both Özgür and Melike were planning careers in biology, the subject of their studies. Today, they have faced arrest, endured a two-year long criminal trial, and have become seasoned LGBTQI+ activists. They have gathered around them a community of activists who are determined to improve the lot of LGBTQI+ students in Turkish universities. They are also two of the founding members of ÜniKuir, an association focused on promoting LGBTQI+ rights on university campuses in Turkey.

Özgür and Melike were already among the leaders of the METU club in 2016, when Turkey experienced an attempted coup by a faction of Turkish armed forces against state institutions, including the government and President Erdogan. The following May, the president declared a state of emergency.

For Melike and Özgür, this state of emergency meant that LGBTQI+ events were banned in Turkey.

“Things got more difficult then,” says Özgür. “The government stepped up its campaign to supress any opposition, and they stepped up control within universities. We felt more pressure on us. From 2017 to 2019, all our events were illegal.” 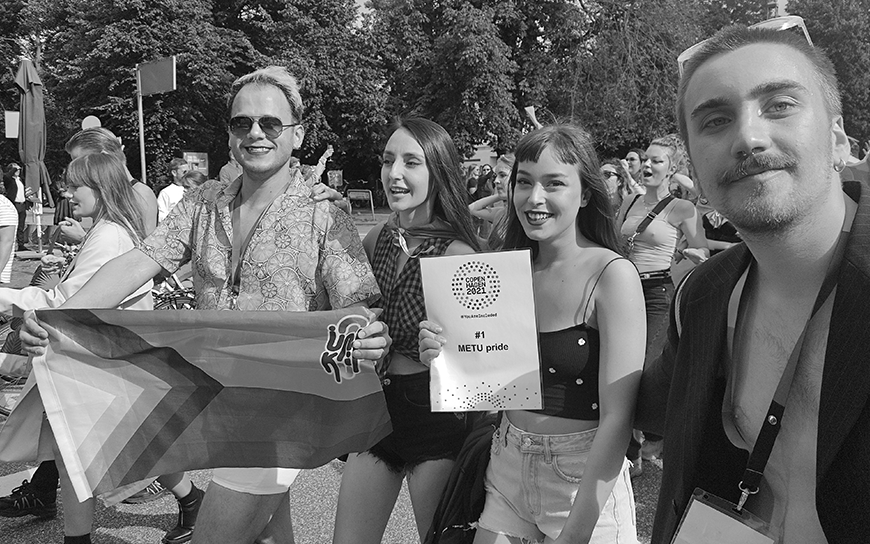 In 2019, the METU university authorities banned the Pride March, and students staged a sit-in that was violently dispersed by police. 22 people were detained, including Melike and Özgür. Then, two months after Pride, police arrested Melike and Özgür and one other activist, on the day they were to graduate.

“They kept us in custody the whole day and we missed our graduation ceremony. They wanted to threaten us and to create a connection between our LGBTQI+ activities and terrorism,” says Melike.

It was then that the authorities launched criminal proceedings against the activists, accusing them of illegally organising Pride March. Legal proceedings lasted two years, and it was only last October that a judge dismissed all charges, announcing that the organisation of the march was not a criminal activity.

“It may have taken us two years, but it paid off,” says Melike. “There have been arrests at Pride marches before in Turkey, but usually people say they were just bystanders, not participants and they are let go. From the beginning, we insisted we were the organisers of Pride.”

In fighting this case, the activists organised an international solidarity campaign, which they coordinated with Amnesty International and others, as they voiced their demands to exercise their rights freely as LGBTQI+ individuals, and they highlighted the challenges faced by LGBTQI+ students in Turkey. The group collected over half a million signatures of support.

Throughout this period too, the METU activists worked closely with fellow students in Istanbul’s Boğaziçi University, home to Turkey’s second-oldest LGBTQI+ solidarity club, which was closed by the university rector. Its members were also subjected to criminal proceedings and accused of terrorism. 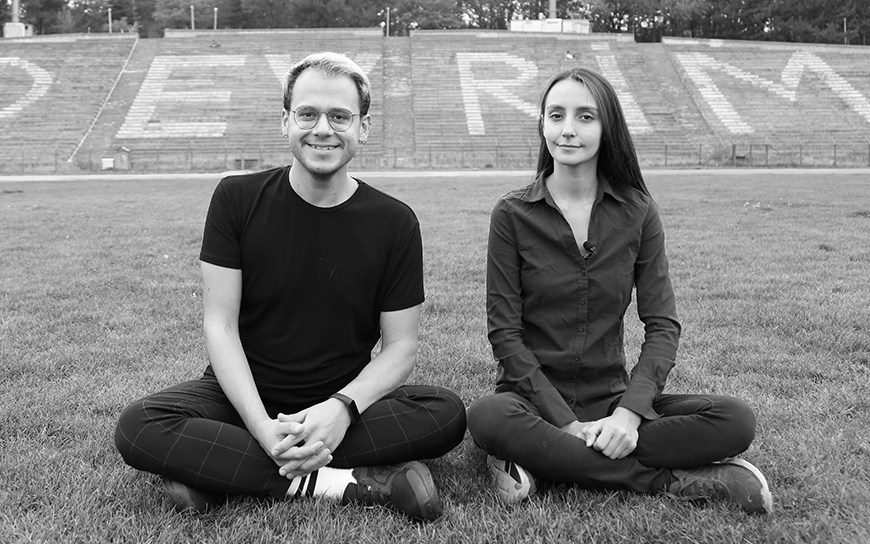 It was the success of these campaigns that encouraged the group to set up ÜniKuir, to be able to support LGBTQI+ university solidarity clubs throughout the country. Set up in early 2020, with EED support, it now includes 36 clubs across Turkey and has more than 1,000 volunteers.

“We realised we had to work together to protect ourselves and others. That way we would not feel alone, and the community could feel more supported,” says Melike.

ÜniKuir now works in all the major cities of Turkey and is extending into more rural areas too.

A key focus is its solidarity programme, which provides support to LGBTQI+ communities nationally. It helps activists set up new university clubs and advises and supports members, holding regular online and in-person meetings. The group also provide counselling and psychological and legal support to young people.

Özgür notes that working online – a mode of operation forced by the pandemic, with a lockdown announced just one month after ÜniKuir was established – has helped them reach out to more students across the country.

ÜniKuir's website is central to its communications and advocacy work, and it has become a platform for the community to come together, communicate, share news, and opinions. “We are also helping our members become more media savvy,” says Melike.

The activists are also working on issues of equal rights for LGBTQI+ students. They recently produced booklets on sexual harassment prevention within universities. They have also ranked all the universities in Istanbul and Ankara based on their how inclusive they are to LGBTQI+ people, and they are now planning to extend this research to all universities in the country.

In the coming months, ÜniKuir is focused on political engagement and advocacy work. With general elections in Turkey in 2023, the activists are engaging with policy makers and candidates inside Turkey and internationally, advocating for the rights of Turkish LGBTQI+.

“These are the most important elections in our lifetimes. We want to encourage political engagement among LGBTQI+ youth,” says Melike.

EED’s support is helping ÜniKuir to strengthen its institutional capacity and is covering the core costs of its operations, as the team seek to strengthen the network of LGBQI+ university clubs.

“Before we founded ÜniKuir, there were only six LGBTQI+ university groups. Now we have six times as many. That’s a great motivation. ÜniKuir is a safe place for student, and it helps them. In the past, there were fewer engaged students. Now LGBTQI+ youth want to make positive changes at their universities. We have given them a platform where they can support each other and learn from each other,” says Melike.