Working for an end to prisoner abuse and torture

For over 30 years, Hurryyat has been defending prisoners’ rights. Today, its work against torture in prisons is vital for Palestine’s future. 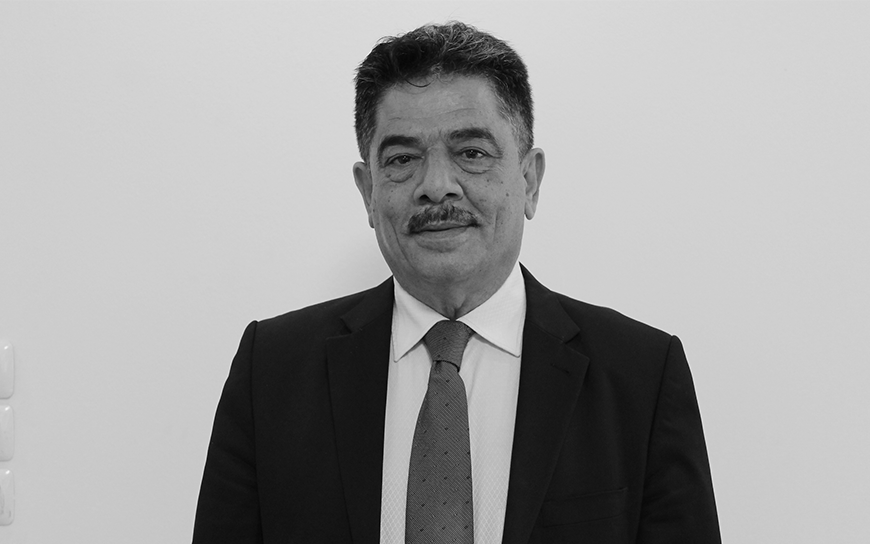 Last June, Nizar Banat, a civic activist and an outspoken critic of the Palestinian Authority, was killed in a brutal attack by Palestinian security forces, who abducted him from H2 in Hebron, an area of the city controlled by the Israeli military, where he was in hiding.

His death sparked furious protests, already fuelled by the cancelation of the first legislative and presidential campaigns in 15 years last May, and ongoing frustration towards a regime that is viewed by many as corrupt, repressive and a puppet of the Israeli authorities. The trial of 14 security officers charged with Banat’s death began in September.

Over these past months, the Centre for Defense of Liberties and Civil Rights Hurryyat has been one of many civil society organisations calling for an independent enquiry into Banat’s murder. Helmi Araj, Executive Director and one of the founders of Hurryyat, believes that his Ramallah-based organisation is uniquely placed to make such demands.

“For over thirty years, Hurryyat has developed close relations with the security services that are built on clarity, courage and objectivity. It’s highly complicated to work with them, but our approach is to criticise in a constructive way, to raise awareness and to develop a culture of accountability. We cannot demand accountability of the Israeli occupier if we do not live up to the same standards,” he says. 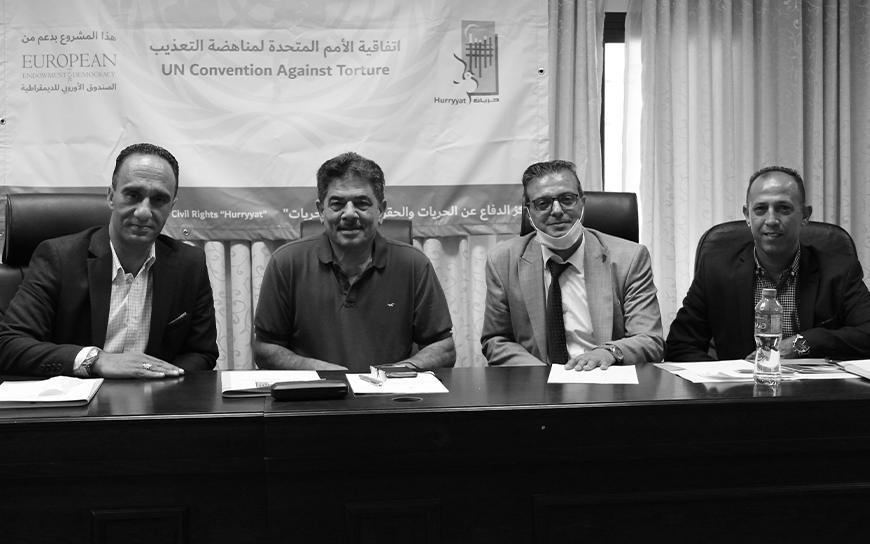 Araj explains that that the word Hurryyat, which means ‘freedom’, has important connotations for Palestinians, with people’s lives in this region moulded by their desire for freedom.

Many Palestinians or their family members have served prison sentences. According to Hurryyat’s own statistics, there are currently 4,650 Palestinians incarcerated in Israeli prisons, 200 of whom are child prisoners and 40 of who, are women.

Araj relates that he was repeatedly arrested over a twenty-year period and he served a number of prison sentences. This experience combined with his legal background means he strongly believes that international law is the right tool to fight for freedom and civil rights for Palestinians.

Hurryyat was initially established in response to the imprisonment of Palestinian children in Hebron and Ramallah, who were arrested for throwing stones, during a period of mass demonstrations in the region that saw the demolition of many Palestinian homes. Many of these youngsters faced sentences of up to 20 years.

Today, the organisation has three main programmes: providing medical services to ill prisoners in Israeli jails; securing the right to movement for Palestinians banned from travelling - this was also Araj’s case for many years; and combatting torture in Palestinian prisons.

“We examine every case separately to work out the best way to help people,” says Araj, noting that he and his team collaborate closely with the Palestinian Authority's offices in charge of justice and the body dealing with prisoners’ affairs. 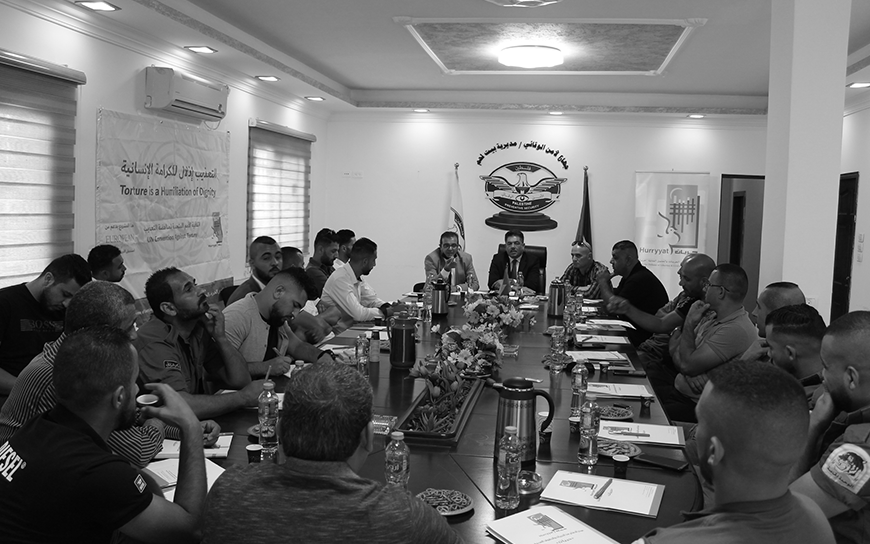 An important part of the centre’s work is monitoring legislation passed by the Palestinian Authority (PA) and pressing for legislative changes. Araj explains that in 2020, the PA attempted to pass a law that would have hindered the process of creating organisations and associations.

“We found this legislation unacceptable and we campaigned against it,” says Araj. “We organised conferences and discussions with the Palestinian NGOs Network (PNGO), the Palestinian Human Rights Organizations Council, and members of the PA and we worked closely with a syndicate of lawyers. We organised sit-ins and we made our point of view and that of the sector heard. In the end, the authorities froze the law thanks to this work. Of course, international pressure helped too.”

An EED-supported project on torture in prisons

A timely EED-funded grant is enabling Hurryyat to continue to focus on combating torture and inhuman treatment in prisons. The centre faced a funding gap due to the end of EU funding for this project. This work includes informing detainees of their rights and carrying out training with security officials, lawyers, and law students from Palestinian universities to raise their awareness of national and international law regarding human rights and torture.

Araj points out that Palestine signed the United Nations Convention Against Torture (UNCAT) in 2014. However, arbitrary arrest and torture of peaceful activists remain widespread and torture is still not officially a crime within Palestinian legislation. Araj believes that education on this topic is essential.

“Nizar Banat’s death highlighted the importance of the need for training of the security services and for accountability. Many members of civil society felt the security services should be boycotted at this time, but we believe we need to work with them. This is an opportunity to prevent similar events from taking place in the future,” he says.

Under the EED grant, Hurryyat has organised a number of training sessions in the West Bank for security services, all of which were attended by more officers than anticipated, an indicator of the need for change according to Araj.

“We explain to security officers that torture is a serious crime and that they will not be protected by the political system. We are raising awareness so that they can respect the law. There is a real feeling of nervousness now as many officers don’t know how to behave. This incident has damaged the whole political system and they know that,” says Araj. 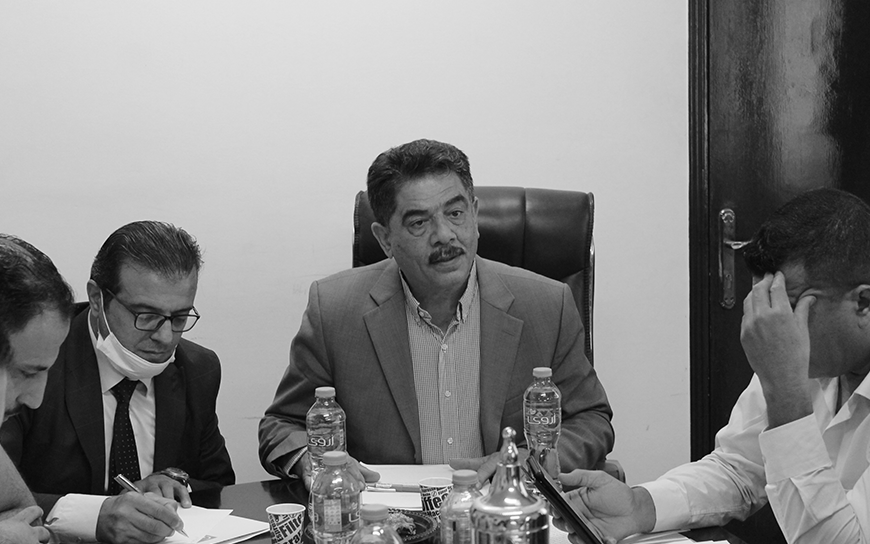 Renewing the legitimacy of the political system

Araj firmly believes that a new election date needs to be set rapidly. “Elections are the only way we can get out of the current political crisis. They will renew the legitimacy of the political system. That way we can amend laws – on torture and on women’s rights, on gender-based and domestic violence.” He notes that Hurryyat is planning to raise awareness on this issue in the future.

In the meanwhile, Hurryyat is hopeful of attracting new funding and expanding their work in prisons by hiring additional lawyers.

Araj is aware that the future is not an easy one for Palestine. “We are engaged in a battle, and we know that. There can be no future for the political system in Palestine without respect for freedom of expression and opinion, and, of course, the prohibition of torture. We say this to everyone: to the politicians, to the security services, to the media, and to the people,” he says.