Touch of a rose: reaching out to Syrian refugees in Lebanon

Northern Lebanon is home to some of the most vulnerable, destitute Syrian refugees. A former aid worker is helping them regain confidence and prepare to rebuild their country once peace returns. 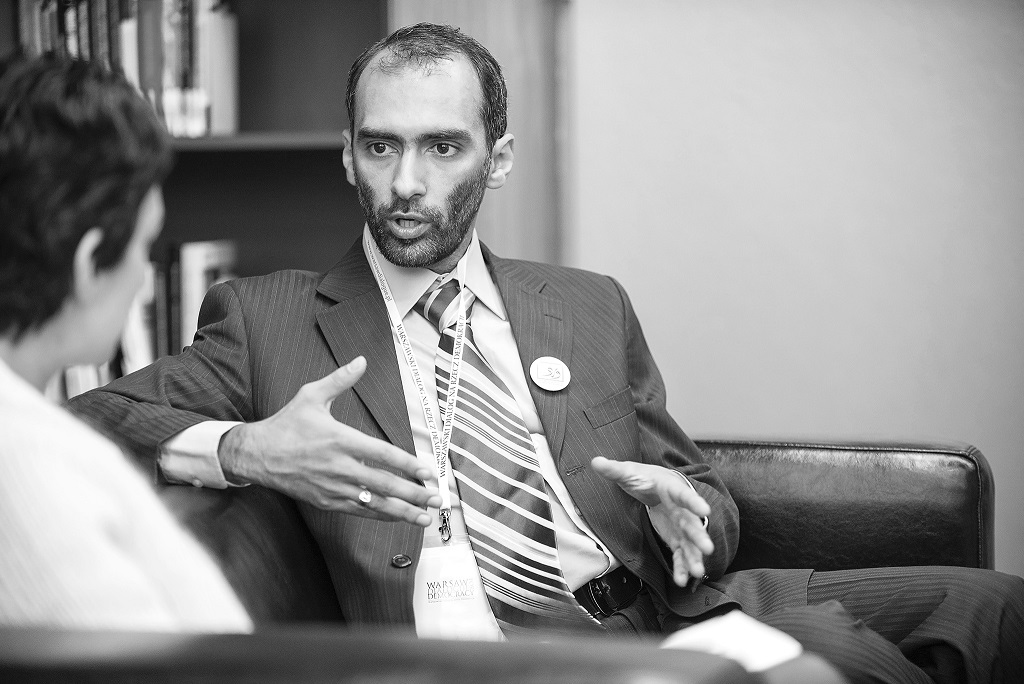 Up until 2011, Mohamad Ashraf Al Hafny provided psychological support to Iraqi refugees in Syria as an aid worker for the Syrian Red Crescent.

Six years down the line, he is a refugee himself and is tapping into his experience in disaster management to help to his own people. Al Hafny is now one of the 1.1 million Syrians who have sought refuge in Lebanon since the start of the conflict. Like he once did for Iraqi refugees, Al Hafny tries to ease the anguish of fellow Syrians whose lives were destroyed by the war.

Al Hafny founded Lamsat Ward in 2012. The organisation provides psychosocial support services as well as advocacy and awareness-raising activities. It reaches out to some of the most vulnerable Syrian refugees, including young people struggling to find their place in Lebanon.

The group is based in the northern Lebanese city of Tripoli, in a neighbourhood that is home to a large Syrian population. Many Syrian refugees also live in nearby refugee settlements.

Lamsat Ward is currently receiving financing from EED to support the Katatib initiative, a ‘social hub’ offering a mix of educational and cultural activities. Hosted in a centre in downtown Tripoli, activities focus strongly on young people. The centre has grown into a safe and welcoming place away from the harsh realities of life as a Syrian refugee.

The Tripoli area is a volatile, economically depressed region that has witnessed periodic bouts of street violence since the end of the Lebanese civil war. The massive arrival of Syrian refugees has only added to the tensions and put a strain on already stretched resources. Al Hafny says the lack of opportunities makes young refugees particularly vulnerable to radicalisation and social violence.

That’s why we wanted to create a safe space, away from political influences, where young people from different backgrounds can learn and share ideas together."

On a recent visit to the centre, we met a number of the volunteers, staff and young people who take part in the various activities on offer. One of the those introduces young Syrians and Lebanese to concepts of civic education, critical thinking and principles of democracy. During training cycles of three months, they learn how to analyse what they read and hear and about the importance of searching for reliable information sources amid a conflict that has deeply polarised their country.

Al Hafny says that he and his colleagues want to empower young refugees and give them the tools they need to participate actively in rebuilding the future Syria once peace returns.

One of the female volunteers said that she was attracted to the centre because it offered not only social and recreational activities but also was “daring in tackling social and political issues".

“There are no taboos here,” she said. “The important thing is that we build our knowledge but are given the freedom to make up our own minds. In a nutshell, it’s ideology-free politics.”

This training programme is just one component. The group, for instance, also holds regular film screenings followed by discussions during which viewers can express their view on the issues raised by the film and share their own life stories. It also organises reading sessions and hosts open cultural conferences. There is a well-stocked library, a computer pool, and an adjacent cultural café where visitors from different backgrounds can discuss and exchange.

Mo’men has been volunteering at the centre for several months and heads up the cinema club. The club currently organises one screening per week followed by a discussion session.

“We tackle subjects from different perspectives and have a strict set of criteria for selecting the films,” he explains. “The films have to have a clear message.

“I started coming as a visitor, then I felt that I wanted to contribute more. Now the centre has become a part of my life, I feel that I belong here.”

With its inclusive approach, the centre is the first of its kind in the area.

“I believe that the centre is really unique in north Lebanon. Here we have continuous activities and attract both Lebanese and Syrians,” says project manager Asma, herself Syrian-Lebanese and living in Tripoli for five years.

Young people are encouraged to help run the organisation and conduct its activities. This allows Syrians to gain precious work experience in a country where they are barred from holding a job.

“We try to instil a sense of responsibility in young people,” says Al Hafny. “Many have already attended training sessions by other civil society organisations but have not had any chance to put what they learned into practice.”

One of those students is Mustafa, a finance graduate who is now the organisation’s accountant. He initially started as an assistant but took over the reins when the original accountant left after two months.

“I was thrown in at the deep end!” he says with a grin. “It’s a lot of responsibility but I feel that I am really growing and gaining hands-on work experience that otherwise would have been very difficult to acquire.”

The idea is that this rose will blossom again, it symbolises a new beginning," he says.