Raising a generation against corruption in Palestine

A Ramallah-based NGO is building a culture of accountability among young Palestinians. There are already signs of a change in mentality among young people who are increasingly critical of corruption. 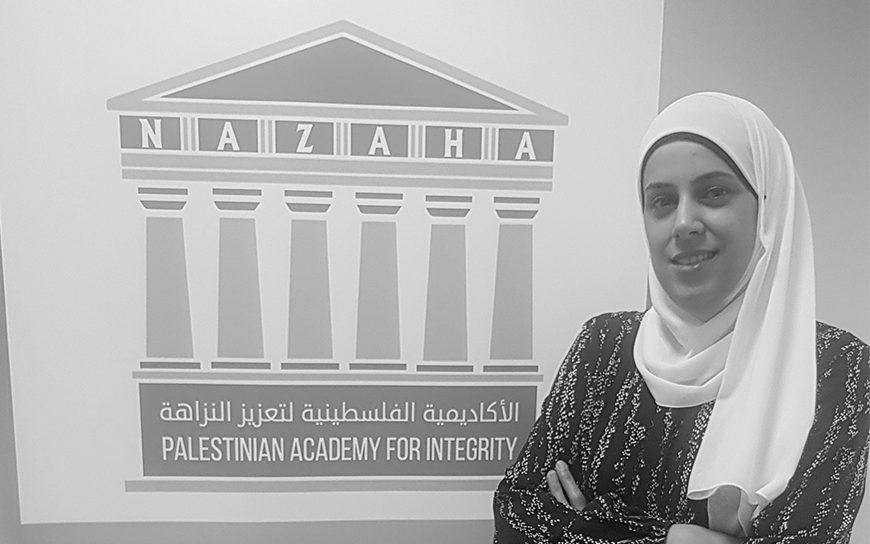 Integrity. Transparency. Accountability. Abeer Musleh, founder and executive director of the Palestinian Academy for Integrity or Nazaha repeats this mantra over and over during our interview. She is firmly convinced that Palestine’s future depends on these three words. She is even optimistic.

Musleh speaks to EED from Ramallah on a day when Jerusalem was yet again in the media spotlight with the city engulfed in some of the worst unrest seen in years as hundreds were reported injured in clashes between Israeli police and demonstrators in East Jerusalem. Days later, the situation had escalated dramatically as Hamas fired rockets into Israeli territory, and Israeli responded with a 11-day air raid that killed nearly 250 Palestinians, including 66 children. This was surely a time when it was hard to feel any optimism.

A new activism among young people

But Musleh firmly believes that the ongoing events in Jerusalem and Palestine reflect a new activism and conviction among young Palestinians, and one that is played out on social media. This activism is also reflected in young people’s increasing demands for more transparent governance and their low tolerance for all kinds of corruption.

“In the old days, people were afraid to report corruption; it was seen as a weakness. Today, the digital world has empowered young people and attitudes are changing. Young people are educated and powerful and they know they can fight corruption by reporting it, particularly on social media,” she says.

Nazaha’s work over the past four years has surely helped bring about this change in attitude among young people. Corruption is often cited as Palestine’s biggest challenge after the Occupation. According to AMAN, a Palestinian anti-corruption body linked to Transparency International, 72 percent of West Bank residents and 37 percent within the Gaza Strip believe that corruption is a significant issue for Palestinian Authority institutions, with the most common forms of corruption identified as wasta or nepotism, embezzlement and the abuse of position.

Building a culture of anti-corruption among Palestinan youth

Musleh and her colleagues at the Academy are quietly building an anti-corruption culture among young people, one that spurns nepotism and favouritism, encourages corruption whistleblowing and safeguards public money. They are working with Palestinian universities, colleges and schools to instil these values through specialised training and educational courses on good public governance, as well as providing specialised training to staff from Palestinian ministries. They are also working to raise the general public’s awareness of corruption and their overall rights.

In collaboration with the Ramallah-based Birzeit University Faculty of Law and Public Administration, the Academy has developed a tool kit entitled ‘How to fight dangerous aspects of corruption’ focused on ministries and other associations, and with EED support, they recently developed a second tool kit focused on local government bodies.

They have also developed 12 radio programmes based on these tool kits with invited guests including students and civil society experts.

Musleh is particularly proud of the new online and print Nazaha Magazine launched thanks to EED funding. The first edition of the magazine focused on issues of transparency and accountability related to the Covid-19 pandemic, gave information on recent court rules and provided legal interpretations on new laws, and gave readers three tools to fight corruption. It contained student research and articles by a variety of experts working on anti-corruption. The magazine was distributed in universities around Palestine and sent to partner organisations. Musleh was inundated with emails and letters praising this publication, the first of its kind in Palestine.

She explains that it was her experience lecturing in Birzeit and other West Bank universities that convinced her of the importance of founding Nazaha.

“Everyone knows that corruption is a huge problem in Palestine. But when I’d start speaking about accountability and transparency, they’d laugh at me at first. By the end of the course, I could see a real change in students. They understood the topic and they had developed more awareness of these issues. They believed that it is possible to fight corruption. This is why we decided to found Nazaha,” she relates.

Nazaha fills a particular niche within the Palestinian anti-corruption landscape. It was founded by a diverse group of people including academics, civil activists and business leaders in coordination with AMAN, the main anti-corruption NGO in Palestine. Whereas AMAN researches levels of corruption and focuses on punitive action, Nazaha seeks to promote the values of anti-corruption in society through its collaborations with Palestinian universities.

Challenges and future plans for Nazaha

The Academy faces many ongoing challenges in its work, with stable funding probably the most pressing one. Musleh notes that it is challenging to work for sustainable changes in society when she is dependent on short-term budgets. EED funding has filled an important short-fall this year.
Covid-19 has been another big challenge for Nazaha, and she admits that the team struggled initially to adapt to an online mode of being. She notes though that in the end the pandemic opened up new opportunities, with students from throughout Palestine, including the Gaza Strip, able to attend online trainings.

Now the Academy has long-term plans to issue certificates to graduates of their anti-corruption programmes. They are also looking at future projects on digital empowerment as a way of fighting corruption and on training investigative journalists who work on anti-corruption topics.

And Musleh remains optimistic despite the obvious challenges. “I love my work. I have learnt so much about transparency and accountability over the years and I want to share this knowledge with others. The government is managing our public money, and people need to know how this money is spent. We need to make the government accountable. Knowledge is the key to empower this change. This is what we try to do at Nazaha,” she says.