On 31 May, EED and International IDEA organised the workshop “Citizen Led Assessments: Engaging in Democracy” in Tunis. It was designed to introduce the basics of International IDEA’s citizen-led assessment methodologies to Tunisian CSOs from different regions (Kef, Kairouan, Mednine, Gafsa, Bizerte, Sousse, Manouba and Tunis). 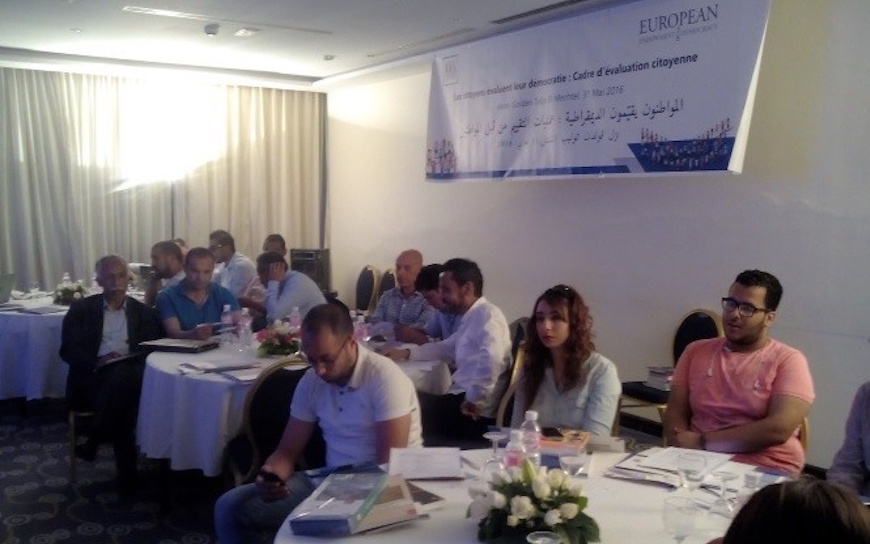 Shena Kaiser, the Acting Regional Director for IDEA’s West Asia and North Africa Programme, and Hiba Ben Haj Khalifa, EED’s Country Consultant for Tunisia opened the event and welcomed the participants. Mohsen Riahi, law professor and expert on local democracy presented the state of local democracy in Tunis. He pointed out that on the same day of the workshop Members of the Tunisian Parliament were discussing a bill to amend the electoral code; over 100 proposed amendments were published just a day before, after 8 PM.

Mr Riahi stressed the importance of this law, as it touches very closely the political and economic issues in Tunisia. One important question is whether it would be appropriate to have municipal and regional elections at the same time. Budgetary issues, good governance and public finance are playing a key role in deciding upon this question. Moreover, according to Mr. Riahi, in case of simultaneous elections political pluralism could be in danger, as in Tunisia there are at most three or four political parties capable of winning the elections. He mentioned the example of Turkey and how the ruling Party of Justice and Development (AKP) for decades counted on municipal elections to achieve the governance of the country.

The second part of the workshop was conducted by Ms. Nadia Hadded, from IDEA International, who presented the democracy assessment tools developed by IDEA and implemented since the early 2000s: three evaluation frameworks, namely the State of Democracy (SoD), State of Local Democracy (SoLD) and Democratic Accountability in Service Delivery (DASD).

According to its concept, the State of Democracy (SoD) assessment framework “enables citizens to undertake assessments of their own democracies in order to define home-grown reform agendas and inform home-grown policy initiatives”. (www.idea.int/sod/framework)

In the last part participants from the different CSO’s discussed their own experience in local democracy. EED partner RAJ (Réseau Alternatif des Jeunes) in Tunis launched a citizen campaign in 2013 called “Ma Galoulnech” (They didn’t tell us!). This initiative follows up on important government decisions that were taken without any media coverage. Participants agreed that there were a lack of evaluation and reporting tools for their initiatives, as well as a lack of scientific basis for both qualitative and quantitative questionnaires. They expressed their interest to be trained on these tools before the upcoming elections.