On 11-13 June, EED joined 60 other partner organisations and 2,000 participants from over 140 countries in Bonn for the annual Global Media Forum (GMF) coordinated by Germany’s international broadcaster Deutsche Welle. 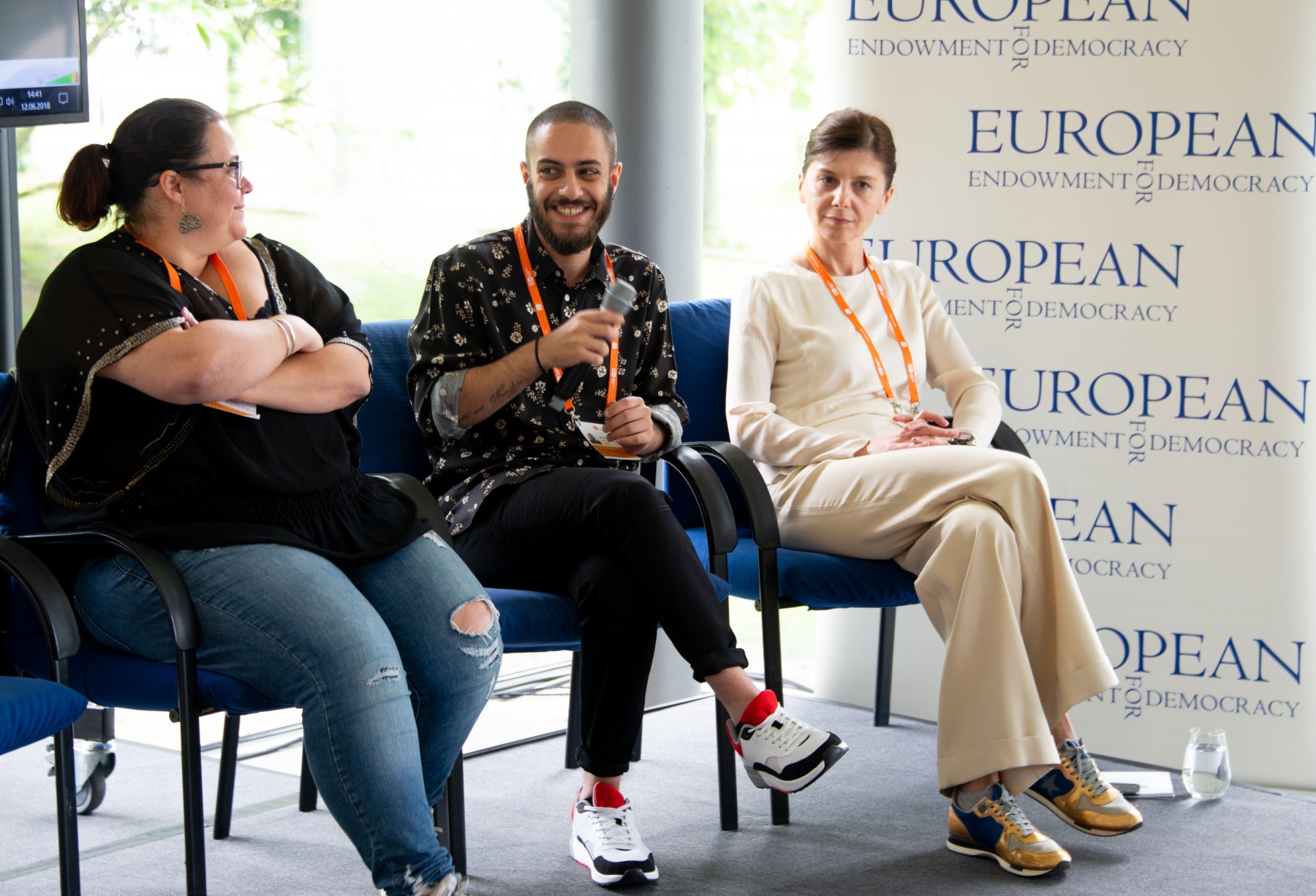 The annual event brought together decision-makers and influencers from the worlds of journalism, digital media, politics, business, civil society and academia for a series of thought-provoking discussions and debates around this year’s focus topic “Global Inequalities”.

As part of the conference, EED hosted its own workshop on 12 June entitled: “DEMOstream: media as a tool for equality promotion and inclusion in the EU Neighbourhood”. The session was moderated by EED partner, prominent Lebanese journalist and co-founder of Daraj media outlet, Diana Moukalled.

The aim of the session was to showcase diverse and inspiring responses of a number of activists to overcoming inequalities, and through innovative media formats.

Opening the session, Moukalled spoke of her own media initiative launched last year with the support of EED:

“After the initial hope of the Arab revolutions, I now belong to a defeated generation but that is why I decided that it’s either now or never. We launched a progressive independent platform targeting Arab speakers last year, Daraj, which is going from strength to strength.

"We report on issues that have never had a channel before, for example, relating to women’s freedoms, to the LGBT community, to minorities, towards marginalised groups in the Arab world, without having the taboos or the limitations we are facing within the traditional media.”

Through interactive presentations, the speakers then examined different media tools and methods for raising awareness of inequalities and taboos, fighting discrimination, and advocating for change.

Human Rights Defender, performance artist and musician, Vrezh Varzhapetyan from Right Side NGO in Armenia, showed a short film entitled Fearless. EED-sponsored Right Side is the first NGO in the country to specialise in transgender issues and aims to advance equality for transgender people by promoting and establishing income-generating activities as well as raising awareness about human rights in the community.

“We launched the ‘I AM FEARLESS’ campaign to send a message that there is no place for stigma, hate and discrimination in Armenia,” said Varzhapetyan.

“I am an artist and we are free spirits. There are no boundaries for artists. All the discrimination that I have experienced as a LGBT person has made me stronger. These things make you fearless.”

Founder and Director General of Tabula Media, Tamara Chergoleishvili, showed a film of news footage highlighting the problems of social discrimination in Georgia. She talked of the important role of independent media in opening mindsets and challenging stereotypes through her own personal experience of setting up the Tabula outlet:

“To make all equal we need to win the war of ideas. Liberal media and civil society are at the forefront of this war,” she said.

“The film aims to stimulate a broader reflection on oppression facing women in Egypt. We are not making a value judgement on sex workers. But women more than men are more often forced to make choices against their will. It’s the socio-economic structure that forces women who don’t have a choice,” explained Sami.

A lively discussion with the audience followed, with activists recognising the value of sharing experiences and stressing their determination to keep pushing for change despite adversities and grave challenges.

Taboos and discrimination were also central topics of the EED–hosted screening earlier in the day of the hard-hitting documentary film “Against Me”. Producedby Lebanese NGO KAFA (meaning ‘Enough’ in Arabic), which seeks to create a society free of violence and exploitation of women, the film received support from EED and was directed by journalist Diana Moukalled.The documentary shows how the discriminatory Personal Status Laws control the fate of women in Lebanon, through the personal stories of seven women belonging to different Christian and Muslim religious sects.

As Lebanon consists of delicate balance of a large number of sects and religions, the country has around 15 laws regarding ‘personal status’ i.e. issues such as divorce, inheritance, and child custody. Every individual must abide by the laws pertaining to the religion and sect to which they belong.

The poignant and harrowing stories in the film provoked many questions for the director, who underlined the importance of tackling taboo issues.

“Unfortunately politicians in Lebanon avoid tackling these subjects,” said Moukalled. “We need a civil status law that treats everyone equally, regardless of their religion or gender. This film is part of a campaign to drive change.”

See how EED championed (in)equalities at the Global Media Forum 2018: