Ukraine, Belarus and Moldova are at the front line of a heated battle for their own future. They are highly exposed to various threats emanating from Russia, which deploys a set of tools aimed at weakening their sovereignty. 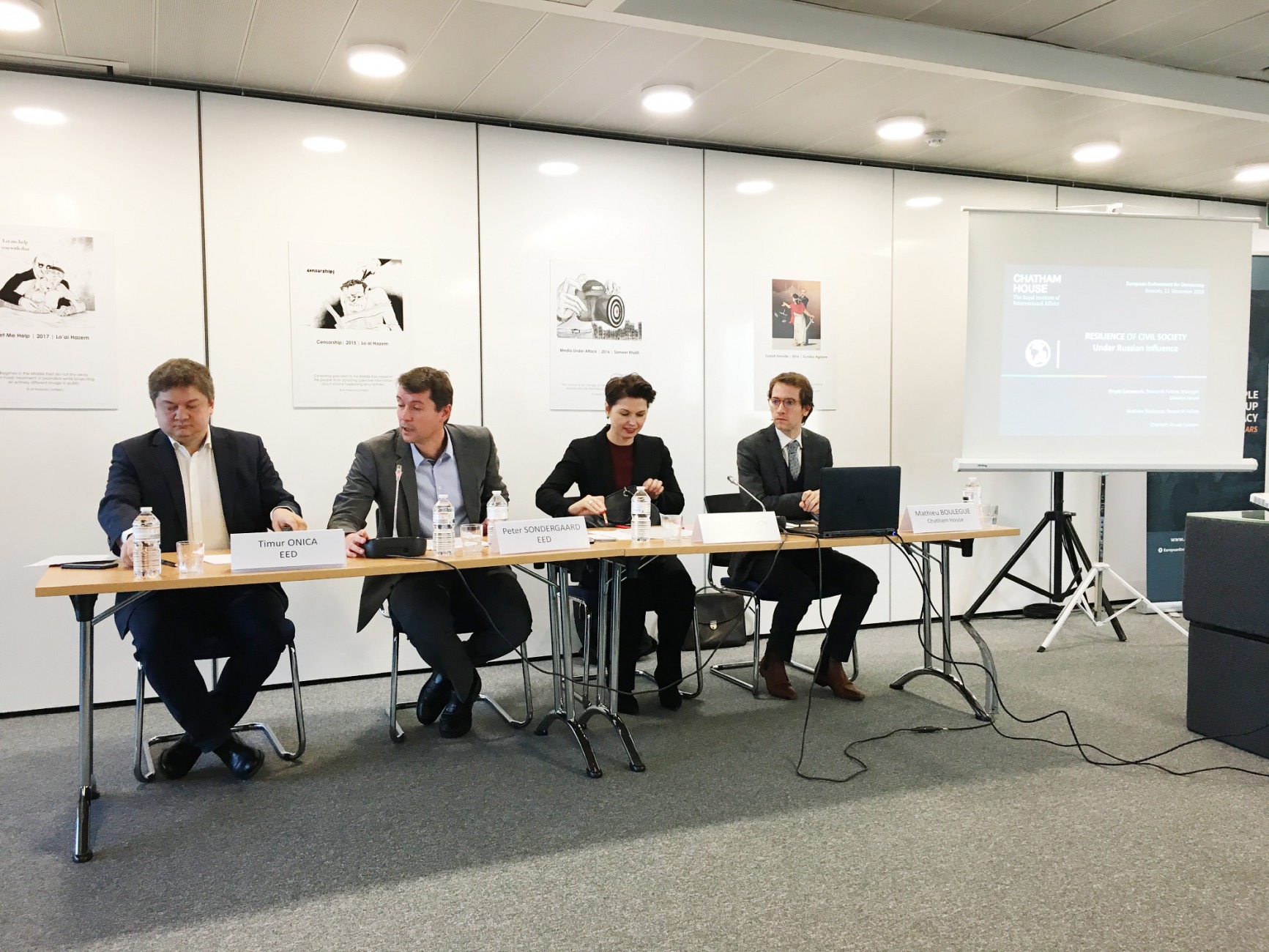 On 12 December, EED invited Chatham House to present its new report “Civil society under Russia’s threat”. Two of the report’s authors, Orysia Lutsevych and Mathieu Boulegue, discussed their findings with the Brussels audience and other experts.

The report addresses Russia’s negative influence and examines how the work of CSOs is shaped by it. It tries to identify the top three vulnerabilities in each of the three countries and looks at possible responses.

The report underlines that a system of non-consolidated democracy prevails with low citizen engagement, a disillusioned population after Euromaidan and a collapsed regional media sector. 52% of Ukrainians are now of the opinion that it is hard to say who started the war in eastern Ukraine.

The Ukrainian government has already implemented a number of measures to limit Russia’s influence in the country: it banned Russian social media, Russian journalists do not receive accreditations, the military has a strong presence, and state and cyber sector cooperate closely. Ukrainian civil society offers a number of media literacy and fact checking initiatives in order to combat Russian disinformation.

The situation in Moldova is considerably worse, the report says. The state has been captured by a few oligarchs with strong ties to Russia, while there is hardly any independent media that could counter Russian propaganda. The Orthodox Church represents another negative influence by disseminating anti-western narratives. This artificial EU-Russia polarisation is instrumentalised by the current government for further political control.

According to the report, you can barely see a response from the government to combat Russia’s influence: the anti-propaganda law of 2013 is nothing more than window dressing, and the church cannot be touched.

Belarus is slightly different from the other two countries as it is part of the Eurasian Union and an authoritarian state. The report points out that in connection with the Ukraine crisis, the Belarusian regime has begun to strengthen a national Belarusian identity – but media and social media remain firmly in Russia’s hands. As in Moldova, the Orthodox Church is pro-Russian, and when it comes to civil society, it proves difficult to distinguish between real NGOs and GONGOs.

Nothing is done by Belarusian President Alexander Lukashenko to counter Russian influence.

The following recommendations were made by Ms. Lutsevych and Mr. Boulegue:

Katarina Mathernova highlighted the EU’s strategy in combatting Russian threats. She informed that the EU adjusted its funding mechanisms for Eastern Partnership countries after a stakeholder consultation. She also mentioned the new EU Action Plan against Disinformation, which aims to build up the EU’s capabilities and strengthen cooperation. Among other things, media capacity shall be increased and the EU Stratcom team shall be reinforced.

EED Executive director Jerzy Pomianowski underlined that trust is key. The EU has to find ways of how to build more trust. Talking about internet regulation, he stressed that a smart balance between freedom of expression and regulation of online media needs to be found.