On 27 June 2018, the European Endowment for Democracy (EED) held its 5th anniversary event at the European Parliament. This unique occasion was attended by representatives of the EU institutions, Member States, EED beneficiaries and members of the democracy support community. 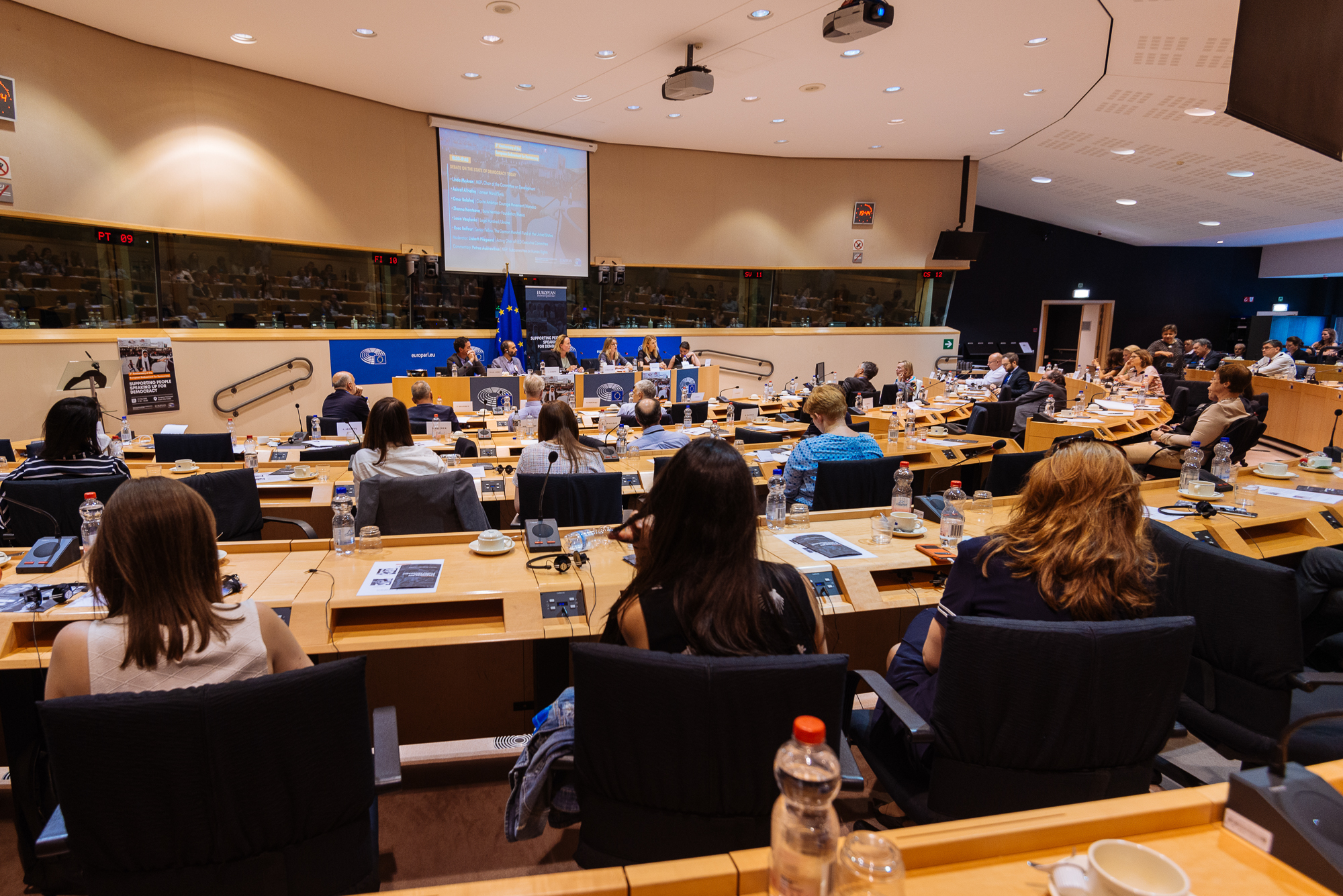 Discussions focused on the added value of EED in the region, the impact it has made after five years of operations and the future of EED’s work in supporting people who speak up for democracy and human rights.

Introductory and keynote interventions by high-level speakers from the European Parliament, EEAS, European Commission and the international democracy support community marked the opening of the evening.

Elmar Brok MEP, Chair of EED Board of Governors, welcomed the participants stating that EED support has proven to be not only important, but also extremely relevant: “EED does not only help civil society and media with funds, but more importantly, provides them with courage and support to go forward in these difficult times. EED grantees are inspiration to everyone and shall have a continuous support of the European Union.”

Yves Leterme, Secretary General of International IDEA highlighted that the role of EED as a complementary democracy support mechanism. “After these five years we can see that without any doubt the establishment of EED was a good decision,” he said.

Christian Leffler, Deputy Secretary General of the European External Action Service, spoke about the EU action on human rights and democracy, focusing on the withstanding engagement in the Neighbourhood. He emphasised the joint endeavour behind the EED’s establishment: “EED was born out of our collective effort, mobilising all the Member States to promote democracy for sustainable peace and projecting it to our Neighbours. Its achievements have been impressive over only five years. We are strongly hoping that the seeds that have been planted can take root and sustain.”

Maciej Popowski, Deputy Director-General for Neighbourhood Policy and Enlargement Negotiations, European Commission, congratulated EED on the latest extension of its mandate and progress made over the past years: “The world is changing. The evolution of EED’s mandate reflects the evolving needs and the firm recognition of EED in the policy frameworks we operate in. The European Neighbourhood Policy refers to EED as a tool to deliver the Union’s commitments to democracy and human rights.”

The event featured the first screening of the EED 5th anniversary video clip, which brings to the fore the voices of EED beneficiaries. Watch the inspiring stories and listen to the voices speaking up for democracy:

The opening was followed by presentations of EED success stories that have made a difference, framed around the question on the state of democracy today, with a commentary by Linda McAvan and Petras Auštrevičius MEP.

2017 has been yet another volatile year for democracy worldwide. Many countries in the European neighbourhood and beyond continue to confront grave challenges – from increased security threats and ongoing conflicts to heightened nationalism, societal changes and economic vulnerability.

Since its inception, the EED has supported hundreds of dedicated and courageous individuals that promote democratic values in their countries. These people are at the heart of EED’s work and engagement. During the debate, EED partners shared their insights about the situation on the ground and outlined how EED funding helped them to address local needs.

Ashraf Al Hafny, the founder of Lamsat Ward (Lebanon/Syria) emphasised he feels a part of a EED family and thanked the team for believing in him. Working with the Syrian refugees in Lebanon, he stressed the very idea behind their work is to restore the dreams of the Syrian youth: “We might face challenges with regards to access to basic livelihoods and life in dignity, but we are not just poor refugees in need of aid, we are people with passion and history. We want these young people to be convinced they will go back to rebuild their country. We want them to live this dream.”
Al Hafny is one of the 1.1 million Syrians who have sought refuge in Lebanon since the start of the conflict. He founded Lamsat Ward in 2012 based on his previous experience in working with Iraqi refugees. The organisation provides awareness-raising and community activities but also advocacy and psychosocial support services.

Omar Belfreij representing the Clarite Ambition Courage Movement– a  political  movement  aiming  to  develop  a  political alternative for Morocco – talked about building bridges with artists and intellectuals in the country. Their project “Festival Kamleen” is organised in cooperation with 17 civil society associations and about to take place in October: “We are trying to convince the Morrocan people that democracy is crucial to achieve things in terms of  development, not just a romantic myth to chase.”
Omar Balafrej is an elected member of the Parliament of Morocco and Rabat city council. As a member of the opposition, Balafrej advocates for true democracy and alternative economic and social policies for Morocco.

Zhanna Nemtsova representing the Boris Nemtsov Foundation (Russia) talked about the importance of education and student empowerment to foster the democratic narrative countering the regimes. "When I say I'm from Russia, people immediately respond, 'Putin!' Regimes are always associated with their leaders, as opposed to democracies," she stated.
Zhanna Nemtsova is founder of the Boris Nemtsov Foundation for Freedom, a charitable organization based in Bonn, Germany promoting the ideas of freedom and democracy, as well as keeping alive the memory of Boris Nemtsov. Zhanna also works as news anchor at Deutsche Welle.

Lesia Vasylenko, the founder of the Ukrainian organisation Legal Hundred, praised the civil society in Ukraine for its resilience: “In the tough reality of war the civil society like ours got an opportunity to prove itself, to come and work together towards a better future.”
Lesia Vasylenko is Chairwoman of Legal Hundred NGO from Ukraine. She is a lawyer, human rights activist, public figure, and founder of Legal Hundred NGO, which provides monthly assistance to at least 1200 military personnel and veterans. The NGO supports veterans in understanding and protecting their rights as active civil society members, strengthening their regional network.

Following to the input from the field, Rosa Balfour, Senior Fellow at the German Marshall Fund for the United States, contributed to the debate with the research perspective, stressing that now that we might not have democratic future, it is in our interest to support civil society globally. “The relevant EU policies need to reflect on plurality of views and organisations. This could be an agent for change,” she concluded.

Relive the event with our photo gallery: