As Ukrainians Migrate to Europe, Ivano-Frankivsk Brings Europe to Ukraine

IVANO-FRANKIVSK -- As Europe’s magnet pulls more Ukrainians west, young entrepreneurs in this historic city in the Carpathian foothills are responding with their own soft power. They are leading a municipal self-improvement movement -- Teple Misto, or “Warm City.” 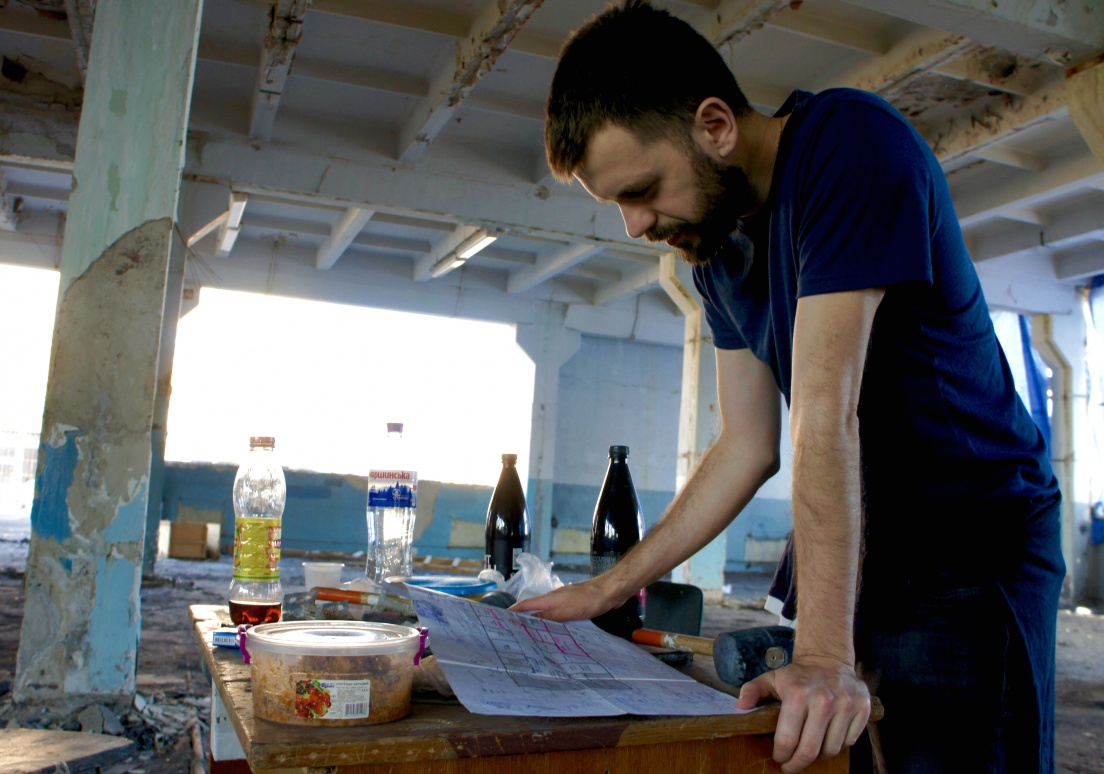 Teple Misto founder and CEO Yuriy Fylyuk examines blueprints for the Promprylad factory project, Work to recycle this industrial space into an art and educational center is to be completed by 2022. (supplied)

Ivano-Frankivsk for the 2020s

Engaging volunteers and business leaders, the Teple Misto has humanized a city deformed by 45 years of communism and two decades of post-Independence decay. In the past three years, Teple Misto has completed over 200 projects – pedestrian streets, an annual half marathon, and the removal of ugly signs to highlight the city’s historic aesthetic.

The emblem is UrbanSpace 100, a combination café, radio station and community center. Radio hosts interview guests in a sound proof glass cube, feet from a bustling espresso bar. Daily appearances by musicians, poets, and speakers transform the café into a cozy cultural venue popular with young people from throughout the region.

Founded by Ivano native Yuriy Fylyuk, UrbanSpace 100 is supported by 100 local investors who each donated $1,000 to start the cafe. These investors are activist shareholders, having a say in how this 100-seat space is operated. Building on this success, Fylyuk opened five more restaurants in the city. Fylyuk then created a holding company for the restaurants, one with an ambitious name: 23 Restaurants.

But behind the hipster restaurants and red brick walkways, there is a business strategy.

“After three years in Ivano Frankivsk, we began to feel constrained by the city,” said Fylyuk, who got his masters degree at Ivano-Frankivsk National Technical University of Oil and Gas. “We felt that we were giving more to the market than it could accept. We had a choice: either move to Kyiv in search of more dynamic markets, or stay and, somehow, develop the local market here.”

In 2014, in the aftermath of Ukraine’s Revolution of Dignity, Fylyuk and 52 other business leaders created Teple Misto. The goal was to humanize and modernize the city. By drawing on modern European urbanism, they wanted to reconnect to Europe a city historically shaped by three centuries of Polish or Austrian rule.

Tourism was courted for Ivano, once an outpost on the Habsburg Empire’s eastern frontier. For modern tourists, it was billed as a charming staging ground for drives into the Carpathians, two hours to south. Ivano’s moribund airport was spruced up, and flights started to Spain, Kyiv and Turkey. Last year, the passenger flow hit 110,600, four times the average for this decade. This winter, helicopter service started to Bukovel ski area.

Last year, Teple Misto embarked on its most ambitious project to date: revitalizating Ivano’s abandoned Promprylad factory. This massive, 27,000 square meter former Soviet gas meter factory is now being renovated. The goal is to recycle this industrial space into a creative hub -- a community art space and venue for alternative education courses. Businesses and other organizations are buying shares in Promprylad and becoming co-owners.

“The idea behind the factory project is to create an engine for development and to ‘reload’ the city and region from a post-Soviet model to something new and modern,” said Fylyuk.

Example for Other Ukrainian Cities

Does Teple Misto face Ukraine’s enduring problem: bureaucratic barriers that can only be surmounted with bribes?

“Teple Misto is different in that we are very transparent, cooperative, and non-political, so nobody is threatened by us,” Frylyuk said of the NGO. “When it comes to the local government, they understand that Teple Misto is a good thing for the region, and they can use it as an example when showcasing their own work. In fact, one of the government offices is being transferred to the Promprylad factory.”

This caught the eye of the European Endowment for Democracy, an EU-supported legal foundation based in Brussels. Over the last two years, the Endowment has funded “Rebooting Cities” workshops. Teple Misto teams travel from here to share their experiences in Ukrainian cities, largely in the south and the east, cities where the Soviet stamp was the strongest.