Operating in a shrinking space for democracy, securing sustainable funding, advocating effectively for electoral reform – these were some of the topics discussed by domestic election observers at an event that took place in the premises of European Endowment for Democracy (EED) in Brussels on 21 March 2018. 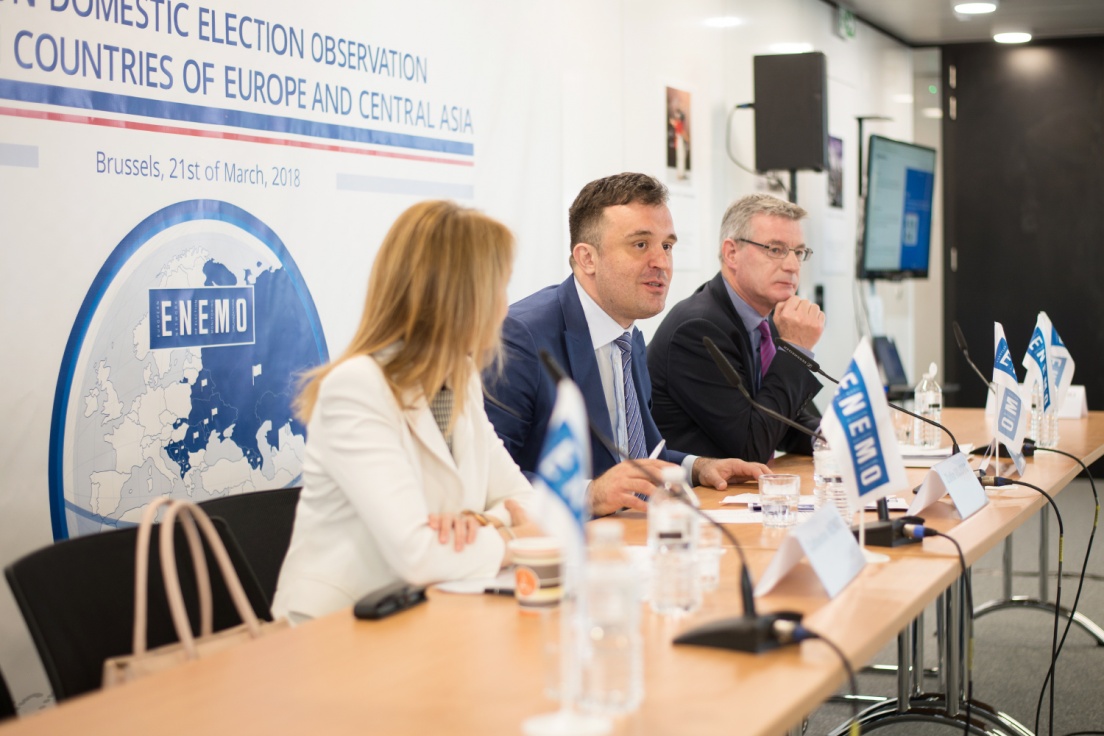 Organised by the European Network of Election Monitoring Organizations (ENEMO), in cooperation with the EU’s Supporting Democracy project and EED, the event was an opportunity for domestic election observers from Europe and Central Asia to share experiences and come up with strategies for future work. Importantly, they were able to talk directly to representatives of the European Commission and other donor organisations present.

Civil society activists and representatives of the EU institutions agreed that there has been a shrinking of the democratic space across much of the region. Activists have faced harassment, prosecution and even violence for trying to observe elections in their own countries. In some states that have previously made democratic progress, authoritarian tendencies are creeping back and domestic election observers have noted a corresponding degradation in the quality of elections.

Activists from the Western Balkans cautioned about the tendency for donors to reduce funding for domestic election observation in their countries despite these trends. Others highlighted the need to keep up the pressure on governments between elections when more restrictive measures are often passed unnoticed. Participants emphasised the difficulty of securing adequate funding for these periods, when donors’ attention is lower.

“This is not an area where we are taking our foot off the pedal,” assured Thomas Millar, Head of Democracy at the European Commission’s DG DEVCO. He also suggested that more attention be given by civil society to democratic accountability in the wider sense, monitoring issues such as public finance management and anti-corruption.

Funding challenges was a recurring thread throughout the sessions. Navigating the different donor funding instruments can be challenging for civil society organisations, particularly when funds are needed fast to react to events such as snap elections.

The importance of neutrality

MEP David Martin, who has led several international election observation missions, spoke of the need for domestic election observers to maintain strict impartiality. “They have to find a way of being constructively critical without becoming the opposition,” he said.

This sentiment was echoed by Carolina Lasso-Navarro of DG NEAR, who said that “It is very important that domestic observers are impartial and are perceived as being impartial” in order to be able to secure EU funding for their activities. This is not always as straightforward as it might sound; as Thomas Millar pointed out, it is hard for civil society organisations to maintain impartiality when faced with a drift towards authoritarianism.

In a context of increasing polarisation of the political spectrum, domestic observers need to be wary of being instrumentalised. Alex Shlyk, head of the elections at the OSCE’s election monitoring body, ODIHR, encouraged civil society organisations to engage with both the government and opposition but not to get too close to either.

Despite the challenges to their work, the forum was also an opportunity to share success stories. Dario Jovanovic from the Coalition for Free and Fair Election - Pod Lupom / Center for Civic Initiatives from Bosnia and Herzegovina, Mikheil Benidze of the International Society for Fair Elections and Democracy in Georgia and Olga Aivozovska from Civil Network OPORA in Ukraine presented their experiences in advocating for electoral reform.

Many of the successful strategies are outlined in the new EU Guide for Citizen Observers on Electoral Reform, produced by the Supporting Democracy project and which was presented at the event by Holly Ruthrauff. Designed as a tool for civil society, but also to help donors understand the process, the Guide helps domestic observers follow up on their election observation findings.

The participants concluded the event by agreeing recommendations for the EU to address some of the challenges discussed. They particularly focused on funding beyond election day to allow activists to engage in continued monitoring of the democratic space and longer-term advocacy and follow-up efforts.

As Zlatko Vujovic from ENEMO pointed out: “Domestic observers fill the gap that international election observation can’t reach – we are there all the time.”