On 11 May, Palestinian journalist Shireen Abu Akleh was shot dead in Jenin refugee camp in Palestine. EED partners react to her death and reflect on the role of independent journalists in conflict zones. 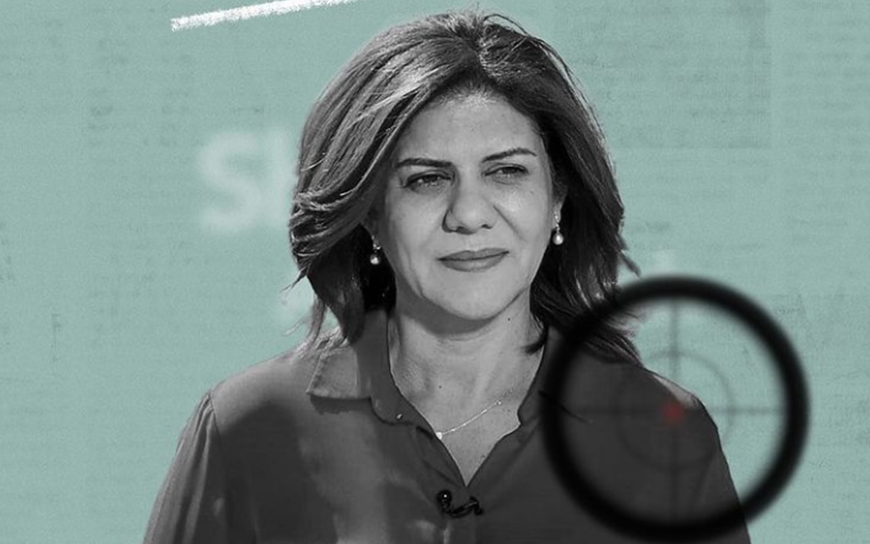 On 11 May Shireen Abu Akleh, a Palestinian-American journalist who had worked as a reporter on the Arabic-language Al Jazeera for 25 years, was shot dead in Jenin in Palestine by a single bullet to the head as she was covering military raids in the Jenin refugee camp. She was wearing a bullet-proof vest and helmet. There has been fierce condemnation of the Israeli Defense Forces and Israeli policy in the West Bank for their role in her death, yet this weekend the Israeli military announced it would not conduct a criminal probe into the incident.

Abu Akleh was a household name in the Arab world. Her death was unanimously condemned by the UN security council who called for ‘an immediate, thorough, transparent and impartial investigation into her killing’. There was also widespread condemnation of Israeli police violence during her funeral procession in Jerusalem.

In the hours after Abu Akleh’s killing, many prominent media initially referred to her ‘death’, with mostly local and independent media calling out the incident as a deliberate killing.

In recent days, EED has spoken with media partners from across the Middle East region to gauge their reactions to the coverage of Abu Akleh’s killing, and to ask them about the role of independent media and the safety of journalists during conflicts.

Speaking to EED, Salwa Husein and Hanadi Qawasmi of Metras, state that as an independent media operating inside Palestine, they see this crime within the wider context. “International news covers this as a stand-alone event. Shireen is a Palestinian journalist who died covering events. Whereas we see her death as part of the larger oppression of Palestinian people...We can portray this larger context and show this crime for what it is: a threat to the entire existence of Palestine,” says Salwa.

This is a point that Sara Ajlyakin and Sadik Abdul Rahman from the Syrian media collective Al Jumhuriya reiterate. “We’ve seen how international media organisations use watered-down language when covering Palestine. They use passive words – ‘got killed’, ‘has been killed’, ‘died’. A deliberate assassination has no perpetrator. Israel has long constructed a narrative painting the Palestinian other as a terrorist and any journalist choosing to work there is seen as entering a field of war. The implication is that the responsibility for any deaths is that of the journalists themselves” says Sara.

They believe that independent media play an important role in deconstructing the discourse that normalises this kind of violence within Palestine, and disregards crimes against journalists as collateral damage.

Mirna Al Atrash and Aladin Al Abed of the Palestinian Radio Baladna believe that this targeting of an Al Jazeera journalist sends a chilling message to smaller independent media in the region. “We are scared to cover the news. It is clear we are the target…Palestinian journalists were already experiencing chronic depression, PTSD, insomnia, and mental health issues before Shireen’s killing. Impunity is a huge burden for journalists,” says Mirna.

Salam Omer, of KirkukNow, an independent news outlet working in Iraq's disputed territories, views the killing from a more regional perspective. “In Iraq, 22 journalists have died since 2003, with no accountability for the perpetrators. Conflict parties see the media as an enemy at time of war. They need propaganda, not quality objective journalism… They want disinformation and they need to control the media to have a platform. We’ve been living with all of this, and it is sad that Shireen has now become another victim,” he says.

Fady Elhassany of Gazan media Last Story also warned that this killing creates a dangerous precedent for journalists covering the Palestinian conflict. “The military spokesperson stated that it is impossible to inform journalists of upcoming military operations. This means that the safety of journalists is forever compromised,” he says.

Speaking of the threats faced by journalists working in conflicts, Salwa of Metras also states, “some journalists are afraid to go back to conflict areas. But for others, the threat is backfiring, and they are more eager than ever to get the truth out, in the light of such atrocities and international obliviousness to them. The main issue is that as a community we cannot protect our journalists.”

During a recent visit to Brussels during the annual Difference Day event, Ukrainian journalist Nataliya Gumenyuk spoke of the public service role played by journalists during war.

Echoing this sentiment, Salam of KirkukNow states that freedom of expression is at the basis of democracy and peace and warns that the killing of journalists should not be easily dismissed; it should be viewed as a systematic problem.

“If we fail to do this, we will quickly forget about Shireen, until we move on to the next victim. This risks the creation of an environment like in Mexico where journalists' lives are constantly in danger. In the Middle East, there is a gap in understanding at a political level of the role of journalism to inform the public about crucial issues,” he says.