EVENT REPORT | Twenty years after Milošević: what has changed for Serbia?

On 8 October, the European Endowment for Democracy (EED) organised an online webinar called “Twenty years after Milošević: what has changed for Serbia?” to mark the 20-year anniversary of the fall of the Milošević regime on 5 October 2000. The event brought together experts from civil society, media, the judiciary, and activist circles to give their assessment of the 5 October “revolution” and the current situation in Serbia. 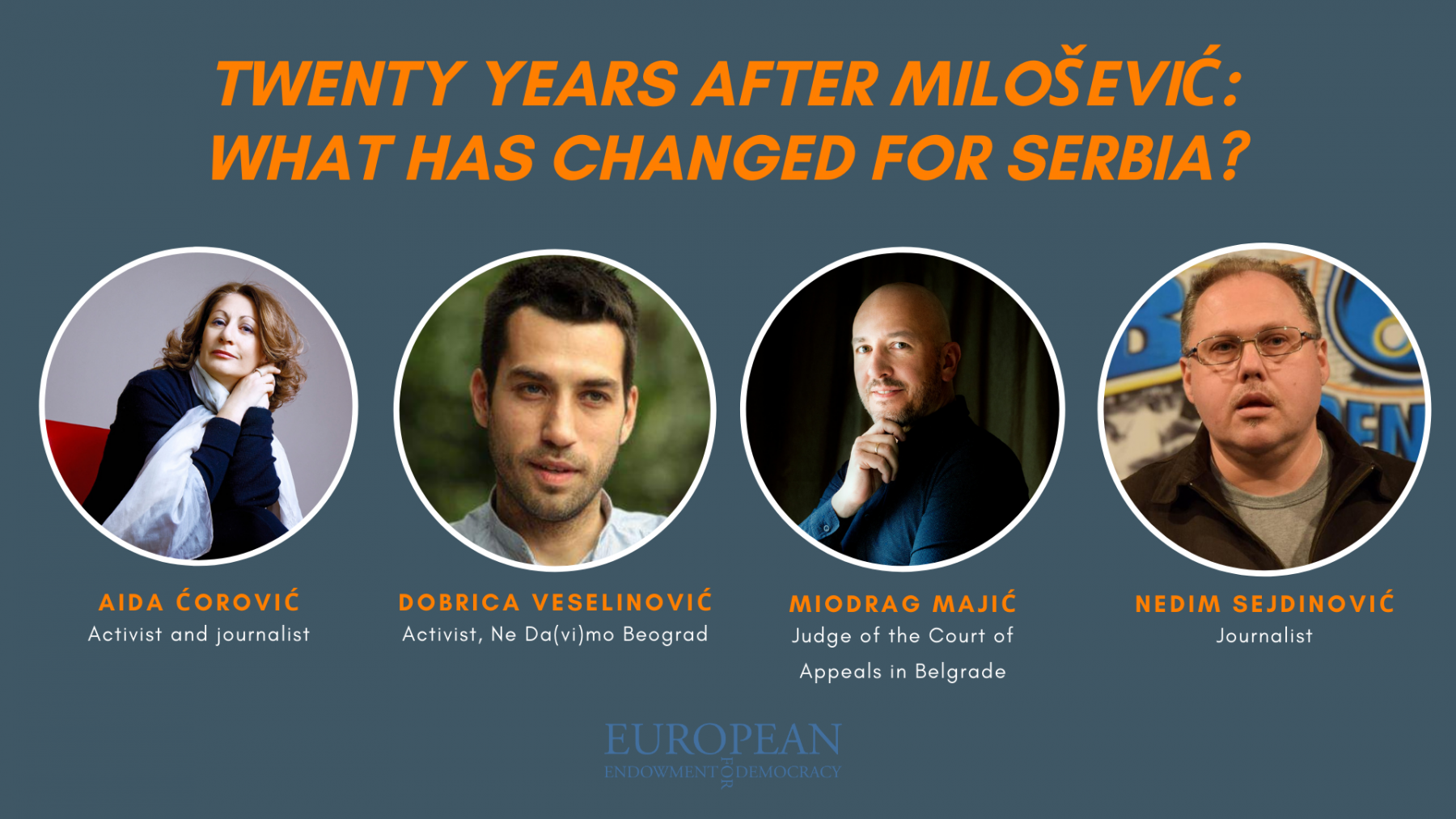 Jerzy Pomianowski, EED Executive Director, gave introductory remarks and spoke of the high expectations following the fall of the Milošević regime in 2000. He noted that the rise to power of the Serbian Progressive Party (SNS) led by current President Aleksandar Vučić has caused a period of serious democratic backsliding, specifically regarding the rule of law and media freedom. Particularly after the most recent elections in June, which were rife with irregularities, Serbia can now be considered a one-party state as SNS obtained 75% of seats in parliament. Pomianowski added that EED actively supports democratic actors in Serbia, with a specific focus on media with a new programme worth 2.4 million EUR funded by the EU delegation in Serbia.

Viola von Cramon-Taubadel, MEP and Shadow Rapporteur for Serbia for the Greens/EFA, spoke of the importance for Serbia to properly face its past, which it still has not done 20 years after the fall of the regime that was the main aggressor in the Yugoslav wars. She reminded the audience that the primary reason for the EU’s founding was to create peace. She also highlighted the crucial role of civil society in bringing people from different backgrounds together and help them understand each other’s perspectives. Von Cramon-Taubadel concluded by saying that prevalent narratives of victimhood may get votes, but will not create a democratic society.

Moderator and history professor, Dubravka Stojanović, asked the speakers to start by describing what the 5 October revolution means to them. All of the speakers shared memories of their feelings of hope and victory in 2000, as well as their serious disappointment at the fact that not much has changed since then. Aida Ćorović, activist and journalist from Novi Pazar, stated that “Milošević still rules the country, even though he’s been dead for 15 years.”

Miodrag Majić, judge at the Belgrade Court of Appeals, spoke about the state of the judiciary in Serbia. He stated that on this terrain, there have been no achievements since 2000, as the pre-2012 democratic governments had prioritised the economy over the rule of law, which at the time was still considered to be important and desirable. Today, the rule of law is regularly mocked in public. He shared that members of the Ministry of Justice openly joked about the independence of the judiciary during joint meetings. High-level corruption affairs occur frequently without any reaction from the Public Prosecutor’s Office. He further stated that this inaction marks every important institution in Serbia. Instead of creating independent institutions, the ruling party is now replacing the state with 800,000 members. “It is now a common belief that change and proper governance is impossible.” Majić stressed that the most problematic thing is that this democratic regression is happening with Serbia on the path to EU accession

Dobrica Veselinović, activist from Ne Davimo Beograd, spoke about the future of political parties. He noted that the main issue with political parties in Serbia is their general lack of ideology and vision for the future. In general, citizens join parties for material gain. However, he stated that there is a blossoming scene of civic movements around real-life issues that parties leave unaddressed. Speaking about his experience with citizen organising, Veselinović shared his realisation that there was a huge potential to organise people at the lowest level and transcend party lines. He continued by saying that regional cooperation is also on the rise at this level, despite macro-narratives that demonise Serbia’s neighbours. Veselinović stated that the EU cannot help in overthrowing Vučić, but it can support initiatives that address key issues in society, such as climate change.

Nedim Sejdinović, freelance journalist, gave an overview of the media situation in Serbia compared to the 1990s. He stated that although most outlets have been privatised, most owners have links to the government and the media scene faces even more severe repression than under Milošević. Most outlets “represent a type of para-media that violate professional standards and media codes on a daily basis. They don’t serve to inform citizens, but to spin reality and openly persecute political opponents.” Sejdinović echoed what Majić said about the rise of the partocratic system, through which citizens organise their lives – medical appointments, employment etc. He also said that corruption scandals are so numerous, that they are often forgotten after several days when the next scandal breaks. “We live in an illusion of democracy, a completely authoritarian system, which has lost all democratic prerogatives.” He concluded by saying that the solution does not lie in new laws – such as the recently ratified media strategy - but in the actual implementation of reforms.

Aida Ćorović provided an overview of the civil society scene in Serbia, noting the advent of government-organised non-governmental organisations (GONGOs) and diminishing criticism from formerly vocal NGOs. “My assessment is that the majority of civil society have become administrative bodies, dealing with endless donor reporting, while there is no serious impact on the local level.” Ćorović added that the EU is also to blame in creating this environment. She further noted the complicity of the international community in that they are not supporting overtly critical organisations and activists for fear of angering the government. Ćorović concurred with Majić’ statement on the non-existence of independent institutions, and particularly regulatory bodies. She added that the general public relies on brave individuals who dare speak openly about the situation in these institutions. While acknowledging the importance of the resolution of the Kosovo problem, Ćorović stated that this should not come at the expense of democracy in Serbia.

Stojanović summed up the discussion by stating that the speakers’ contributions showed the parallel life that has been created in Serbia, which simulates democracy as the authoritarian regime solidifies. She concluded that marking the 5 October revolution has become more of a commemoration, rather than a celebration as it should have been.