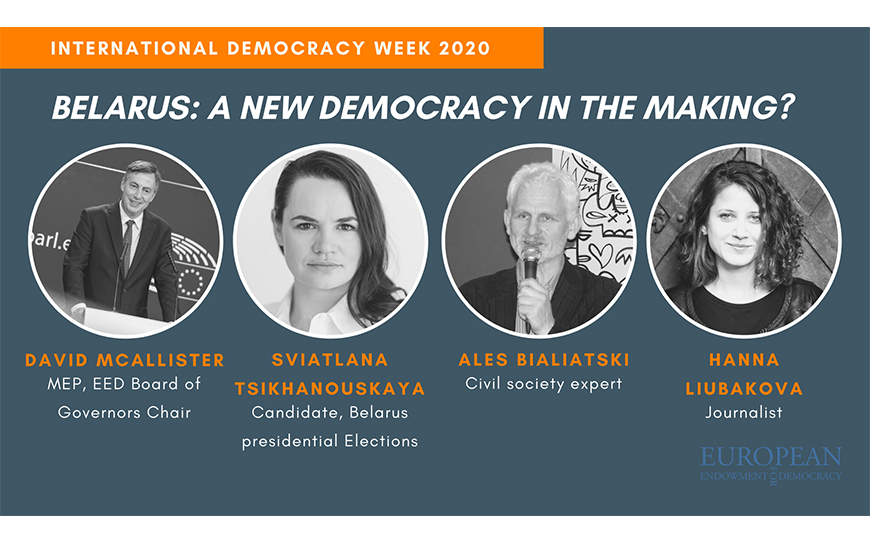 The partner organisations focused on what we can do to strengthen democracy and foster democratic innovation. To inspire discussions, the series marked the launch of the Report “Global Democracy and COVID-19: Upgrading International Support”, which assesses the impact that Covid-19 is having on democracy around the world.

For the past few weeks, the world has been gripped by the mass demonstrations that followed August’s botched presidential elections in Belarus. We have witnessed scenes of streets filled with thousands of ordinary Belarusian citizens demanding change, marking new energy for a society often characterised by apathy during the 26 years of Lukashenko’s autocratic rule. We have witnessed the emergence of a new figurehead of the Belarusian opposition - Sviatlana Tsikhanouskaya.

This webinar consisted of two parts, with the initial part moderated by David McAllister MEP and Chair of the EED Board of Governors, also featuring Sviatlana Tsikhanouskya and Ambassador Thomas Ossowski.

David McAllister MEP, Chair of Committee of Foreign Affairs, European Parliament and Chair of the EED Board of Governors, introduced the discussion. He declared that the real winner of the election is Sviatlana Tsikhanouskaya, a prominent Belarusian opposition activis,  who played a great role in the  recent events in Belarus and faced the threats from the regime. Tsikhanouskaya had to leave Belarus; she sacrificed her life and family for the sake of this country and became an inspiration for her citizens and people outside of Belarus. McAllister claimed that Belarus needs a peaceful solution and Belarusians have the right to choose their own destiny. He noted that the EU does not recognise the results of August elections as they were conducted in an unfair way.

Sviatlana Tsikhanouskaya, candidate in Belarus 2020 presidential elections, reminded the audience that Lukashenko was unable to gain the majority of votes. She noted that the ongoing protests are the longest ever in the history of Belarus and show that the nation does not want to succumb. She stated that the authorities held the elections illegally and against any international law and the election period was accompanied by torture, harassments and imprisonments. Civilians wanted a peaceful dialogue but Lukashenko refused to listen and talk to people. He does not represent the interests of Belarus. Tsikhanouskaya urged the EU and the International Community not to negotiate or conclude any bilateral agreements with the Belarus government, including transactions or investment.

Tsikhanouskaya stated that EU member states should not be afraid to stand for democracy in Belarus and be vocal about European principles. The Belarusian people do not trust either Lukashenko or his regime and are demanding his resignation. She urged that there be sanctions against the people responsible for the repressions and the violent acts against peaceful protesters. She stated that the EU should support the independent media in Belarus.

Thomas Ossowski, Ambassador and Representative of Germany to the Political and Security Committee of the EU, stated that we are witnessing a change in the history of the country. Belarusians are speaking up for self-determination and governance, as well as fair elections. The EU supports civil society and wants Belarusian people’s voices to be heard. Ossowski highlighted that the EU is pushing for reconciliation and reconnection by preparing targeted sanctions to those using violence against civilians. He also pointed out that any actions undertaken by the EU need to be appropriate as this is an unpreceded event within Belarus.

The second part of the webinar was moderated by Miriam Lexmann MEP and speakers included the journalist Hanna Liubakova and the civil society veteran Ales Bialiatski.

Miriam Lexmann, Member of European Parliament, thanked the speakers. She outlined how their words inform the EU. The EU has allocated €50 million as humanitarian aid to Belarus.

Hanna Liubakova, Journalist explained that people were already discontent years ago but they have only now just found the courage to express it. She stated that we cannot ignore the authorities’ violence against protestors. She stated that a unified and strong position from the EU is crucial for Belarus, noting her believe that the EU’s error was ignoring the lack of comprehensive policy from the US. Now the EU must act and put pressure on Belarus through targeted economic and political sanctions.

Liubakova stated that people are resilient and will not stop their protests, despite the authorities’ threats and violence. Lukashenko is trying to scare people but in reacting this way, he is unifying them even more. She said that EU funds should be invested in supporting local and independent media, as well as medical workers, as well as providing for legal support for the repression’s victims.

Liubiakova believes that the conflict in Belarus is a domestic matter and Russia will not hesitate to promote its own interests. Russia would sustain Lukashenko and this would just strengthen its position. The dialogue should be between the Belarusian authorities and people.

Ales Bialiatski, Civil society expert, argued that the situation in Belarus has changed as people from throughout the country facing the hardships of the economic crisis realised that Lukashenko was lying. He noted that the EU should urge Russia not to interfere in national politics and should stop its propaganda against Belarusian people. He urged that the EU should provide solid support to civil society within Belarus, also easing the visas procedure.

Bialiatski reported that independent media are investigating the abuses and the inhuman treatments in prisons, and are documenting human rights violations. International organisations are assisting them but Lukashenko’s government may interfere in this work. He believes that the EU should be aware of this and express more solidarity to both civil society and the Belarusian media.