Strengthening accountability in Lebanon, one month after the explosion: the role of EED partners

One month after the explosion in the Beirut port, the situation in Lebanon is still critical. EED is regularly in touch with our partners in Lebanon and is assessing how to best provide relevant support during this emergency. 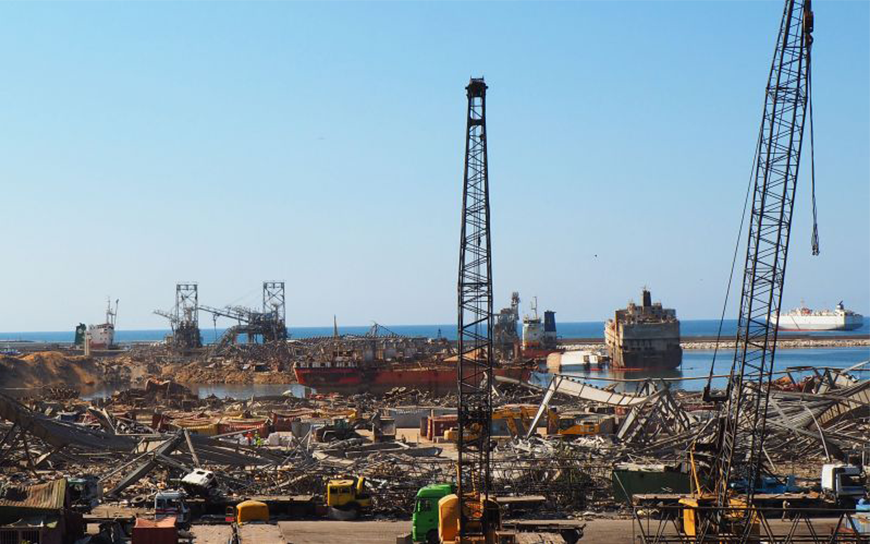 On August 4, 2,750 tonnes of ammonium nitrate, stored in the Beirut port for six years, exploded killing more than 200 people and injuring more than 6000. Beirut residents reported that the explosion felt like an earthquake, and it destroyed large swathes of the city, particularly affecting Mar Mikhael, Jemayzeh, Asrhafieh, Saifi and parts of Downtown Beirut. More than 300,000 people are now displaced from their homes.

Prior to this catastrophe, Lebanon was experiencing a severe economic crisis with its currency losing more than 80 percent of its value since last October and nearly fifty percent of the population already living under the poverty line, a situation compounded by the Covid-19 pandemic.

Many local hospitals, already overwhelmed with Covid-19 patients, reached full capacity when treating the people injured by the blast, and the emergency also meant it was impossible to maintain social distancing measures, which in turn caused coronavirus cases to rise.

Demands of accountability from government

After the blast, the parliament voted for a state of emergency, which remains in place and which many have criticised as unnecessary, as it gives significant power to the army, allowing it to curb freedom of speech and of assembly.

In the days following the blast, thousands of Lebanese took to the streets demanding accountability from the government, and an end to government corruption, which they consider contributed to this disaster.

The entire government resigned on August 10, with former Prime Minister Hassan Diab taking no responsibility and blaming his predecessors and their corruption for the disaster.

Before the explosion, EED partner Gherbal had already played a key role in reporting corruption in the government and they were preparing a report titled Access to Information in the Lebanese Administrations Part III about national budget spending in 2018 and 2019.

EED partner Megaphone is continuing to play an important role in holding the government accountable, publishing news stories on their website and social media that point to key officials responsible for the explosion. They also published a widely-circulated video The Silent Conspiracy, which highlights how widespread corruption allowed for the explosion to happen. Megaphone have also recorded instances of the army using rubber bullets and tear gas against the protesters.

EED partners in Lebanon were all affected by the explosions. While staff members were largely unharmed, only reporting minor injuries, both Joumana Haddad Centre for Freedoms and Gherbal’s offices were destroyed, and they have had to temporarily halt activities. However, Gherbal have set a website, El Da3em, which gathers informations about organisations helping those affected by the blast.

Some EED partners in Lebanon have been focusing on offering humanitarian aid to those more affected by the blast in the past four weeks.

Media organisations - namely Daraj Media, Megaphone, The Public Source and Beirut Today - have been covering the explosion and working on investigative pieces about its cause. As independent media outlets in a country where most media have a political affiliation, they have gained a reputation as the to-go source for unbiased news.

Daraj Media have focused on putting the spotlight on the stories of the victims and their families, and monitored instances of violence against protesters by the army .

Each day, for the week following the explosion, The Public Source published one picture of the aftermath: from damaged buildings to streets covered in debris, from objects left behind by the victims to clashes between the protesters and the armed forces .

The conditions of Syrian refugees in Lebanon are particularly critical following the explosion. With an estimated 1.5 million Syrian refugees residing in Lebanon, most in severe poverty and facing constant discrimination, this vulnerable population have faced further hardship in recent weeks. Syrian victims are estimated to be around one fourth of the official number of Lebanese victims, but they are not included in the official tally.

Thousands of Syrians also experienced major damage to their houses, particularly in the neighbourhoods of Gemmayze, Mar Mikhael and Geitawi, and it is likely that repairing these houses will not be a priority now that the country is facing a major economic downturn.

The Lebanese Center for Human Rights (CLDH) reported discriminations against refugees from organisations and individuals distributing aid after the blast. EED partner Access Center for Human Rights are closely monitoring the impact of the explosion on Syrian refugees and are cooperating with other civil society organisations to provide support. So far, no organised governamental action has been directed to help Syrian refugees.

EED partner Syria Direct published an article detailing the discrimination faced by Syrians in Lebanon in the aftermath of the explosion. They report that some organisations require proof of Lebanese citizenship before assisting people, and almost one in three Syrian emergency respondents were subjected to at least one form of violence, a much higher percentage than their Lebanese counterparts.

The work of EED partners, both when it comes to assisting at-risk groups like refugees and holding the government accountable, is crucial for Lebanon to overcome this moment of crisis. Over the next few months, EED will continue to provide support to our partners, focusing on groups that are not usually given priority in this type of situation, including assisting media organisations to rebuild their offices, so that they can continue their important accountability work.

A month on from the explosion, the situation in Lebanon remains critical and there is still no new government in place. The clean-up operation continues and many hundreds of thousands of Beirut residents remain homeless.

The situation became even more delicate after an August 18 judgement by the Special Tribunal of Lebanon found Hezbollah’s senior member Salim Ayash guilty on all accounts on the assassination of the former Prime Minister Rafiq el Harriri. The sentence could hamper the formation of a political deal among different factions in order to form a new government.