On 15 July 2020, the European Endowment for Democracy (EED) and the the Ukrainian Think Tanks Liaison Office in Brussels organised an online-webinar “Ukraine Today: From 1 year of Zelensky to Covid-19 to Upcoming Local Elections”. 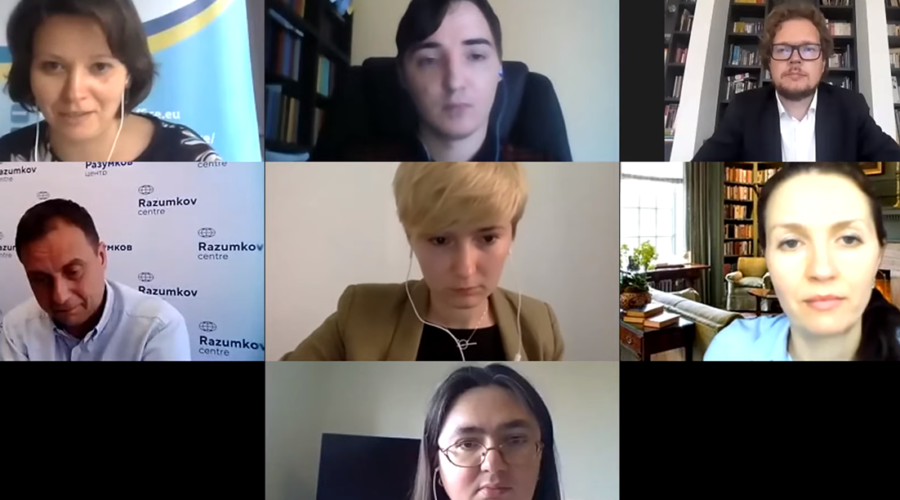 Panellists and participants of the event discussed the achievements and failures of the first year of the Volodymyr Zelensky’s rule, recent political developments in the country, the impact of Covid-19 on the social and economic development of Ukraine, the pace of judicial reform as well as the upcoming local elections planned for October 2020. The event was moderated by Olena Carbou, Executive Director, Ukrainian Think Tanks Liaison Office in Brussels.

Svitlana Kobzar, EED Senior Programme Manager, noted that the first year of Zelensky’s presidency was turbulent. She cited the ‘turbo regime’ of adopting laws in parliament, the dismissal of the first government and noted that signs of the rollback of some reforms were worrying. She stated that Covid-19 and the ongoing war in Ukraine further drain the country’s ability to remain resilient to other challenges.

“Covid-19 has further exacerbated the political and economic situation”.

Oleksandr Sushko, Executive Director, International Renaissance Foundation, stressed the important role of Ukrainian think tanks in ongoing dialogue and cooperation between Ukraine and the EU. He noted a lack of balanced and well-structured analysis of the first year of Zelensky’s presidency and what can realistically be achieved in the foreseeable future noting that it is the think tanks’ job to provide such analysis.

“After the year of Zelensky in office we do have enough data to discuss”.

Martin H. Mühleck, Policy Officer, European Commission, Support Group for Ukraine, gave an overview of the last year in Ukraine from the EU’s perspective. He noted some progress in the reform agenda, including the adoption of land reform and banking laws, stating that this became possible due to the personal involvement of President Zelensky. Significant progress was also observed in the energy sector. He emphasised that judicial reform should be irreversible and anti-corruption reform should be continued. He noted that the Covid-19 pandemic is testing the healthcare sector in Ukraine, and healthcare reform must continue. In March-April the EU made €190 million available to support the healthcare sector of Ukraine, as well as the social and economic sectors and vulnerable groups in the framework of ‘Team Europe’ package.

Viktor Zamiatin, Director of Political and Legal Programmes, Razumkov Centre, presented an overview of the Centre’s recent report “President Zelenskyy’s First Year: Achievements and Miscalculations”. He characterised the first year of the presidency as a combination of some achievements and failures. The new authorities were elected with an unprecedented level of support from Ukrainians, with support decreasing this year, as is to be expected. He stated that there is a lack of conceptual approaches, strategic vision of the state policy priorities and a clear program of activities. There is poor communication between the authorities and society. Policies are not balanced, and there have been some controversial actions.
Ukraine still faces many challenges. There is no end in sight to the ongoing war. Some new initiatives have threatened the country’s stability and sovereignty. The risk of further Russian aggression against Ukraine cannot be excluded. Relations with the European Union and NATO have improved, with Ukraine joining the NATO Enhanced Opportunities Program. Ukraine has a difficult relationship with the USA. There has been no improvement in the work of the Prosecutor’s Office and no breakthroughs in investigating resonant criminal cases. He noted some positive changes the anti-corruption sphere. In terms of social policy, the ‘end of poverty’ proclaimed Zelensky remains an empty promise. The declared return of labour migrants to Ukraine became possible only as a result of the spread of the Covid-19 pandemic.

“Experts and citizens consider that the President and his team haven’t fulfilled their promises, and they are sceptical about the possibility of their fulfilment in the nearest future”.

Iryna Shyba, Executive Director, DEJURE Foundation, noted that Zelensky acknowledged some problems of corruption in the judiciary and noted judicial reform as a priority in his election campaign. There was however, no clear vision or strategy, and NGOs have taken on the mantle of forming a justice reform agenda. This agenda includes the reform of the High Qualification Commission of Judges and the High Council of Justice. The involvement of international experts has proved to be an effective mechanism of selection of judges of the Anti-Corruption Court and heads of other anti-corruption institutions. This justice reform agenda was supported by the President and his party, and some of those ideas were delivered in the draft law submitted in autumn. However, members of the High Council of Justice have now blocked this reform. As of now, there are many courts without sitting judges.

“There is no improvement in the justice sector”.

Veronika Movchan, Academic Director, Institute for Economic Research and Policy Consulting, stressed that the picture in the economic sector is very mixed. The Covid-19 pandemic is likely to affect Ukraine badly from an economic point of view, with GDP falling from between -6% and -11% in 2020. She noted key achievements of the current governments as the gas transit deal based on the EU norms, land reform and breakthrough in AA/DCFTA legal harmonisation. She cited a number of challenges such as public service reform, revision of healthcare and public procurement reforms and an unexpected attack on the independence of the National Bank of Ukraine, which has already had negative consequences for Ukraine’s relations with international partners and creditors.

Anton Avksentiev, Expert, Observatory of Democracy, discussed the upcoming local elections in Ukraine, noting the lack of legal text 100 days prior to the elections. According to the recommendations of the Venice Commission, this law was to be in place one year before the elections. He expects that many political parties will only take part in elections in specific regions of the country. He also expects that Zelensky’s party, the Servant of the People, will dominate with many from the local elite entering popular parties to avoid spending 5 next years in opposition. He notes a strengthening role of media, Internet technologies and targeted advertisement in the elections as well as an ongoing increase in ‘volunteer support’ to distribute food and medical equipment to the population.

“I assume that these elections will be held with a large number of cases of indirect bribery of voters”.