On June 18, 2020, EED took part in the Copenhagen Democracy Summit, which was held on line for the first time this year, organised by the Global Alliances of Democracies. EED Executive Director, Jerzy Pomianowski and three of our grantees from Kosovo, Bosnia-Herzegovina and Armenia joined the event. 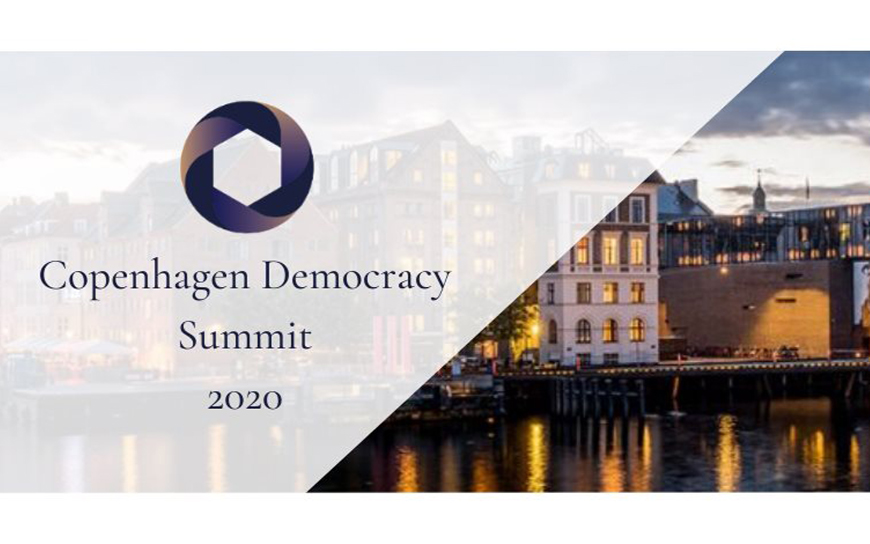 EED Executive Director Jerzy Pomianowski participated as a speaker to the panel United in Democracy We Stand. He stated that the Covid-19 pandemic is posing unprecedented challenges to democracy. Governments worldwide have enacted emergency powers to enforce lockdowns, and some are using this moment of crisis to further restrict democratic activities and silence critical voices.

Pomianowski noted that EED and a number of other democracy organisations are supporting the publication of a policy paper on the impact of Covid-19 on world democracy that identifies the challenges faced worldwide during this period, and that provides a number of recommendations on how best to support democracy in the upcoming period.

He listed these threat as including: excessive use of violence by security forces, such as the putting down of revolts in Iranian prisons; interruption or manipulation of elections such as has taken place in Russia; opportunistic clampdowns on political opponents as witnessed in Lebanon, Kazakhstan and Turkey among many other countries; increased censorship and threats to independent media; increasing disinformation, noting the ‘infodemic’ of malign disinformation campaigns. He noted the statement by Vĕra Jourová, European Commission Vice-President for Values and Transparency that there is, “a surge in narratives undermining our democracies and in effect our response to the crisis.”

He also noted the worrying increase in discrimination against minority groups such as LGBT+ communities in many contexts such as Georgia and in Armenia, against Syrian refugees and against Roma people as well as the gender-based violence worldwide during this lock-down period. Other threats noted include the rise of technocratic governance and of public sector corruption.

Pomianowski concluded that sustainable recovery from this pandemic will require long-term democracy support programmes that can help build strong civil society organisations who can respond to the complex challenges in their societies, can demand accountability and transparency from their governments, and keep corruption and misuse of aid in check.

“If inside the EU we believe in democratic values, we can support them elsewhere; but if we stop believing in them, our credibility is reduced and we won't be able to support democracy.”

Lavdim Hamidi joined the breakout session Keeping Democracy Activism Alive during COVID-19. Sharing your Story. He is an award-winning journalist with an impressive record of accomplishment in investigative reporting and a particular expertise in investigating public procurement. As founder of Kosovo’s* newest independent online media frontonline.net, he is working expose any breaches of public procurement law and to inform Kosovars when public money is misspent, as well as to provide ongoing independent news coverage of current affairs.

“During the pandemic, Front Online worked on holding the government accountable, reporting on how the health ministry bought drugs and equipment without respecting public procurement regulations.”

Darko Brkan, the director of Zasto Ne, a fact-checking website, was one of the panelists for the breakout session Elections and Disinformation Keeping on the Democratic Track during COVID-19. Brkan and his team are now fighting unprecedented levels of fake news and disinformation with Covid-19, and they greatly increased their fact-checking activities in response to the crisis.

“We experienced unprecedented levels of disinformation during the pandemic. We quadrupled our fact-checking output and had an 800% increase in readership. The Western Balkans are in a delicate geopolitical location and we have to be careful about Russian influence, both direct and indirect.”

Anna Nikoghosyan participated as a speaker at the panel Ensuring Women’s Rights during a Pandemic. Nikoghosyan is the co-founder of Yerevan-based FemHouse and she has long been engaged in feminist and queer movements. But it was her experience studying at the University of Manchester for a Master’s degree in Gender, Sexuality and Culture - as a recipient of the prestigious FCO-funded Chevening Scholarship - that convinced her that she had to bring this learning home to Armenia.

“During the Covid-19 crisis, women in abusive relationships are constantly controlled by their abusers. They could not access usual communication channels and transport to reach police stations to seek help.”

*All references to Kosovo should be understood without prejudice to positions on status, and in line with United Nations Security Council resolution 1244/1999 and the ICJ Opinion on the Kosovo declaration of independence.