What are the challenges and opportunities created by the redefinition of the government for the media in Ukraine? What is the future relation between civil society and new government? As the role of civic society remains as relevant as ever, what should be done next? These were some of the key questions driving the panel discussions, which took place at EED’s premises on the 19th of November 2019. 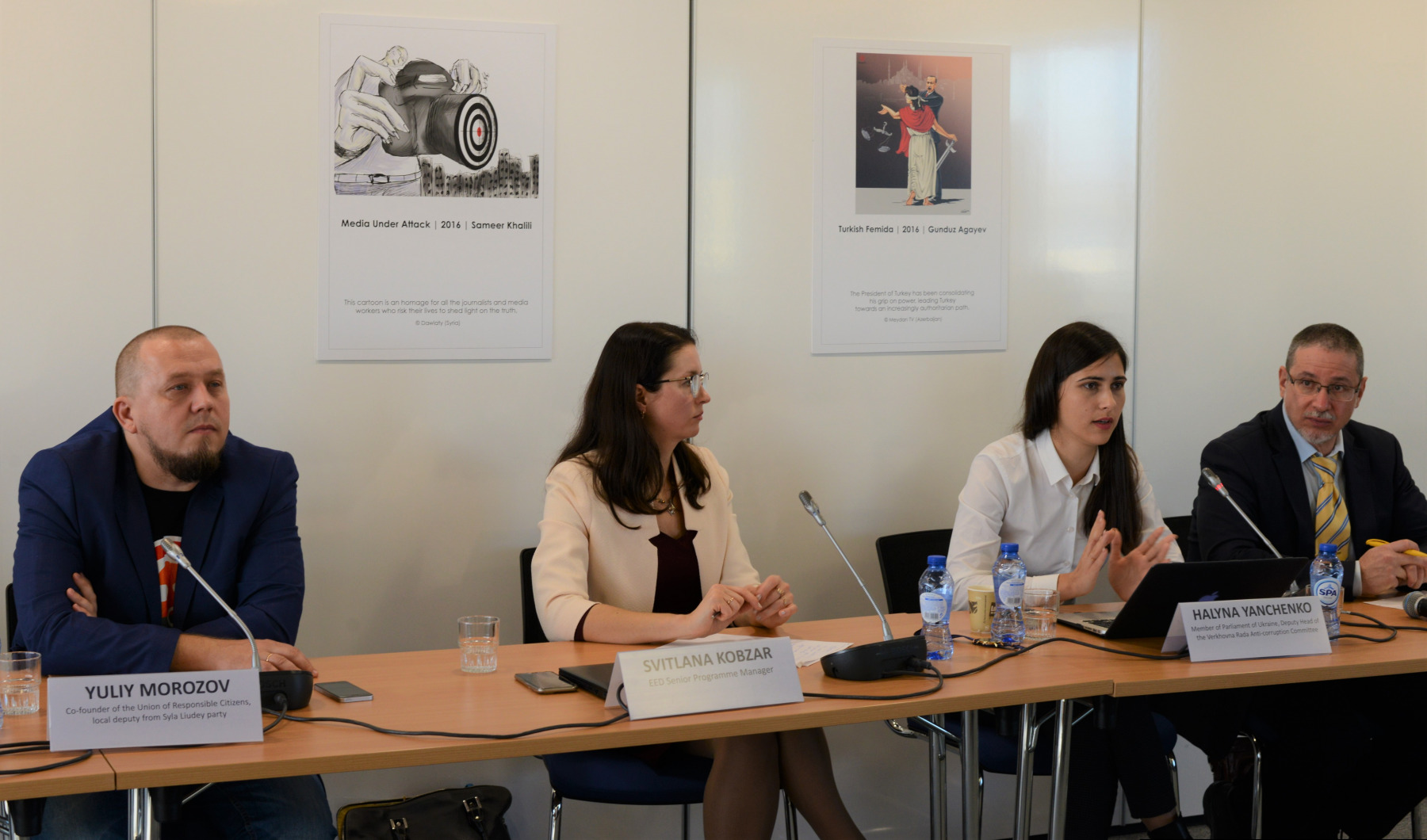 Speakers from Ukraine shared powerful stories of their experiences as activists, politicians and media experts.

In his opening remarks, Richard Tibbels, head of the European External Action Service Eastern Partnership Bilateral Relations Division, noted that the Ukrainian political environment changed with 70% of MPs newly elected. Zelensky is a new type of president with a very ambitious agenda propelled by the so-called ‘turbo regime’ now in place. However, despite the quick changes, some key issues remain: the unsolved conflict in the Donbas, the need of economic reforms and the legacy of top-down institutions.

Civil society maintains a key role in encouraging people to take up their civic responsibility. Tibbels stated that that media situation remains mixed as oligarchic ownership persists and it is difficult for alternative voices to be financially viable.

“Disinformation remains a challenge. The EU is keen to enhance resilience of government, civil society and media to combat this.”

Panel 1: From activists to politicians and back? Re-thinking the role of civic activists

Valerii Pekar, co-founder of the New Country Civic Platform, lecturer of Kyiv Mohyla Business school and Lviv Business school, illustrated the current processes as if Ukraine plays on three chessboards with three major programmes.The first one is the economic agenda: the new government initiated several significant reforms.The second is the war: Zelensky wants to appear as a peacemaker and believes that an agreement with Putin is possible through diplomatic avenues. The third big challenge is the high number of oligarchs and other groups with vested interests.

Parliament is criticised for working in a so-called ‘turbo regime’ whereby parliament and government push through as many reforms as possible in a short amount of time. However, it may also be argued that the turbo regime can be justified as the window of opportunity for change will soon narrow. Civil society has played a significant role in shaping reforms over the past years but now many civil society organisations (CSOs) feel that they are no longer relevant in this new reality.

“There is no good systemic exchange between the new government, the parliament and CSOs. In order to be more effective in this new climate, CSOs should reconsider and reformulate their roles and modus operandi.”

Yuliy Morozov, a civic activist and cultural manager with extensive experience of leading international and local projects, illustrated how, even though the situation in the regions is challenging due to the general resistance to reforms, there are significant opportunities for improvements. Civil society can play a role in encouraging more dialogue on these reforms with the population, but Ukrainian civil society needs to become more mature, professionalised and more constructive in its appraoch.

“Reforms need institutional development so they can trickle down and be implemented in the regions. Civil society can help but we need investment in education and expertise.”

According to Halyna Yanchenko, MP and Deputy Head of the Verkhnova Rada committee on anti-corruption, the quality of the parliament has improved. The number of women MPs has increased, the mean parliamentary age has decreased and there are also many civic activists and experts represented. The president, government and members of parliaments are cooperating to try to implement necessary reforms.

“Thanks to my experience as a local politician, I understand that local authorities are not always the root of the evil. Very often, local authorities have very limited capacity to provide services, to monitor spending, to come up with effective and innovation ideas. Civil society should treat the government not as an enemy but as a partner with whom they can cooperate for common goals”.

Panel 2: Find the politics behind the PR: the role of media in the changing political landscape

Andriy Kulykov, co-founder of Hromadske Radio, pointed out that the popularity of social media as well as the popularity of television and radio is often due to people lacking the skills to work in traditional media but they still have a desire to express themselves.

“Zelensky’s media campaign was a show.” Mr Kulykov declared. “We need to have more responsible journalists who do not fall into traps and the EU can help by sharing experience and knowledge.”

Kulykov noted that journalists should not be considered watchdogs or controlling agents but they should work for the people and among the people. It is easy to plant fake news as information from both the TV and Internet come from the same outlets.

Diana Dutsyk, media expert and Executive Director of the Ukrainian Media and Communications Institute, declared that traditional media are still actively used by 70% of the population. Zelensky used social media to strengthen the influence of his political messages; yet, the actual messages were formed only via traditional media. There is a rift between the new authorities and media.

She observed that there is a need for discussions on creating business models for media to make them self-sufficient. Media literacy and new tools like community broadcasting need to be explored.

“Today the media face many challenges and our legislation is outdated and does not correspond to the reality. We need to regulate disinformation but in a careful way and with constant communication and input from journalists.”

As Roman Kulchynsky, founder of texty.org, stated, most of Ukrainian television channels belong to oligarchs or are funded by the Kremlin. The standard of journalism is poor and the traditional media act like propaganda machines. Mr Kulchynsky explained that Ukraine needs to increase the standards of independent journalism and new socially responsible businesses need to emerge. Media should be looked as part of the economy as well.

“We need standard, independent journalism. The situation in the regions are even worse and media struggle to survive because they only receive revenues from advertisements. The need for a community media is high: however, they need to be working based on common interests.”

This event was co-organised by EED and DRI (Democracy Reporting International).