Advocating for Workers’ Rights and Gender Equality in Georgia

An alternative trade union is mobilising people on issues such as labour rights, gender equality and ‘popular economics’, as part of a wider mission to advance democracy across Georgia. 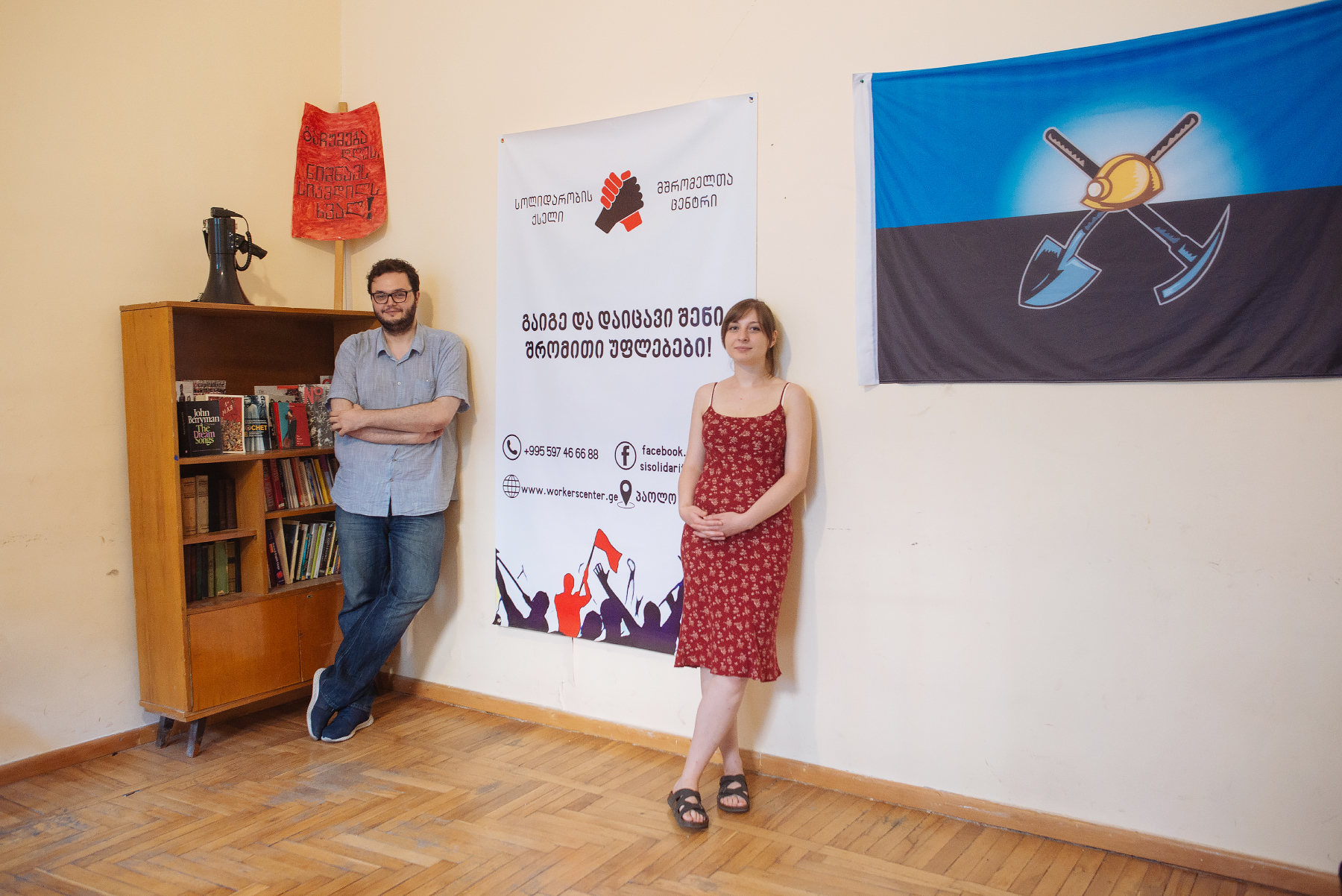 “Most us were working in the service sector and experienced first-hand the poor labour conditions. That sparked us into action and we created this organisation to inform people about their rights,” says Revaz Karanadze, founder of the Network.

What started in 2015 as an initiative bringing together around ten activists has grown into a movement of more than 300 people today. “EED helped us to establish an organisation. Tbilisi Solidarity Network was an NGO, but we wanted to grow - and EED is the kind of organisation that helps you find ways to strengthen yourself”, he adds. In 2017, the Network re-launched as an alternative trade union.

“Our strategy is based on organising. When we became a trade union, we began mobilising people in their workplace through social campaigns, distributing flyers, finding simple ways to inform them about the labour code, workers’ rights and how to defend themselves,” says Solidarity Network board member Neno Charkviani.

While the core values of Solidarity Network remain unchanged, the initiative continues to broaden its focus – with activities ranging from free legal consultations on labour rights violations, to a ‘popular economics’ movement explaining economic reforms in an accessible way, using tools such as the ‘‘stolen wage calculator’,’ and the creation of local trade unions focusing on various areas.

While the Network has a hotline, social media has become one of the most important channels for those who need support or legal advice.

Advocating for workers’ rights is at the heart of the Network’s activities: for example, its members revealed large-scale violations of the rights of employees in Nikora, a supermarket chain where employees had to work long hours for inadequate pay, and supported teachers demanding their legal vacation days. But, as Revaz states, there are also other issues that need to be challenged in the country: “Safety regulations are inadequate and many people are killed on construction sites and in mines. We also have health hazard cases in the service sector, for example, where employees have developed occupational asthma from exposure to chemicals. This was one of our cases.”

One of the biggest issues is, according to Revaz, the definition of working hours: “We want to challenge the large amount of overtime work that isn’t paid. In Georgia, certain sectors are allowed to have a 48-hour working week – but the law isn’t specific enough and it mentions ‘trade’ as a general term. Many supermarkets take advantage of this ambiguity, assigning workers 48 hours instead of 40 – but even then, they often work 60 to 80 hours.”

At the end of the day, if you don’t have decent working conditions and salaries, you are not capable of being part of the democracy in the country – because you just don’t have time.

One of the Network’s flagship cases was support for the Tbilisi metro workers who went on a hunger strike demanding better working conditions and higher salaries. “We respected the legal 21 days notice period before the strike, but when we launched our activities the workers were confronted with a damaging campaign from the officials. The strike was postponed for 30 days but thankfully, we had the support of the public and in spite of the pressure from the officials, we managed to stop the metro,” says Revaz.

Activists worked intensively on a social campaign with flyers, infographics and videos of the workers: “These women and men have to work underground – and Tbilisi metro is very deep. There has not been any environmental renovation, meaning that the work place has high humidity, strong electric fields, high pressure and other health hazards, resulting in 60% of the drivers failing to reach the pension age.”

Women’s education is another key issue the initiative focuses on, challenging the patriarchal models, the mainstream idea of feminism as well as the fact that, according to Revaz, certain groups are often overlooked:

You need to create the conditions and to help women to be more involved in the politics – and you need to find the ways. If you want to empower women you have to start from the grassroots movement, from the bottom – that’s how we feel.

With many issues to tackle, the Network’s members are working tirelessly to contribute to a change. They are part of the Parliament of Georgia’s Committee of Gender and Committee of Social Issues and Labour, closely monitoring the developments in all cases they are involved in, as well as slowly incorporating health care, fighting the privatisation and monopolisation of this sphere by building an alternative confederation.

“There are many people who need our help,” concludes Neno. “EED funding was very helpful and it made us stronger. One of the key aspects was how we changed our vision how to fight, and how we saw what are the most important challenges in our society. We are now more focused on key issues within the context of Georgia.”