EED meets activists at the World Forum for Democracy

Over 1000 actors of democracy from more than 100 countries gathered together in Strasbourg to discuss “Democracy in the Digital age”. 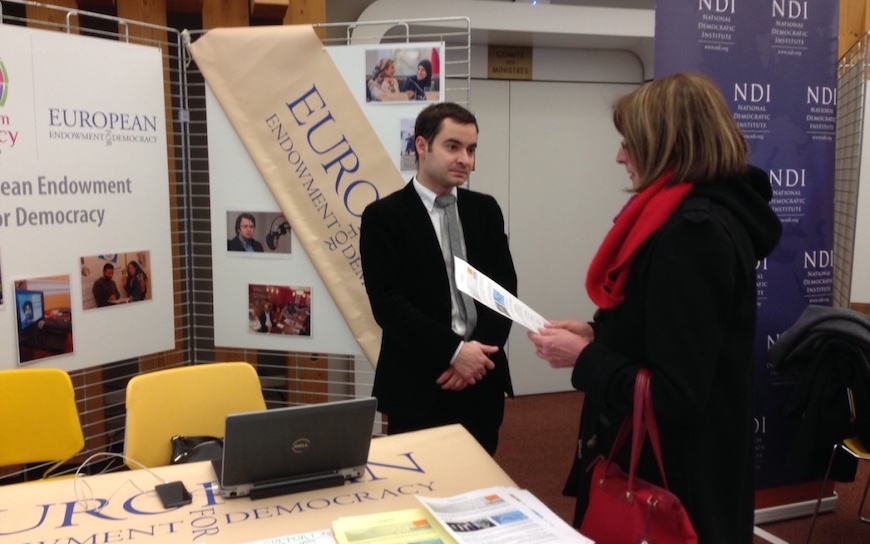 The World Forum for Democracy, organised by the Council of Europe from 27-29 November, asked “Is the internet revolutionising democratic practice? Is there a digital remedy for democracy in bad health? What opportunities – but also risks - does the internet bring for fundamental freedoms?” Very timely questions when social networks, blogs and online media are offering citizens access to public life in an unprecedentedly direct way…

In his opening address, Franco-Lebanese author Amin Maalouf spoke of the “subtle enemies” of democracy and lost opportunities after the end of the Cold War. The world “should have used the chance to set new political priorities IMMEDIATELY.” Today in the digital era, new technologies again present a “chance for democracy promotion”: they are a “real progress for expression and access to information.” But the potential is still untapped, according to Mr. Maalouf: "Where democracy is concerned, however, that progress is still latent".

Smaller groups of democracy activists discussed more focused topics in over 20 “Democracy Labs”. One, on the potential of films to promote democracy, brought together a Tunisian choreographer and activist, Syhem Belkhodja, and the first “freely elected” Prime Minister of Romania, Petre Roman. They shared the conviction of the importance of art to support democratic developments. “Art is a pre-requisite for a functioning democracy,” stated former Prime Minister Roman. “Art creates understanding of chaos,” helping to set the foundations for a democratically working society, he explained.

“You provide the lessons of democracy, without opening your doors to us. The under 25 generation in Tunisia therefore no longer admires European democracy – they can no longer see what it means.”

In the “Off” programme, many NGOs and media focused on internet in times of conflict, as well as the citizen’s responsibility that “comes with the click.” A Reporter without Borders discussion focused on “Actors of Information in Syria.” A Syrian journalist panellist described the specificities of media challenges in Syria. With over 100 “actors of information” dead, and 18 arrested or disappeared in the conflict, security is clearly the biggest challenge. The jihadists’ vision of media as “impure” also poses a new threat, the journalist underlined. At the same time, over 70 new media have blossomed during the Syrian war.

A question raised by the European Endowment for Democracy (EED): “How do you foster changes in mind-sets and the ‘habits of the heart’ of both citizens, as well as the institutions that govern them, to inspire democracy?” At the EED stand, we also asked "What does democracy means to YOU?"

The Ukrainians present at the World Forum for Democracy, collecting signatures of support for the “EuroMaidan” clearly had some answers to show the world.