Event Report: Security Or Democracy | Do We Need To Make A Choice?

Around 130 specialists met in Kabelhallerne in Copenhagen for an international conference on democracy promotion in the EU Neighbourhood, organised by the European Endowment for Democracy on 10 May 2017. 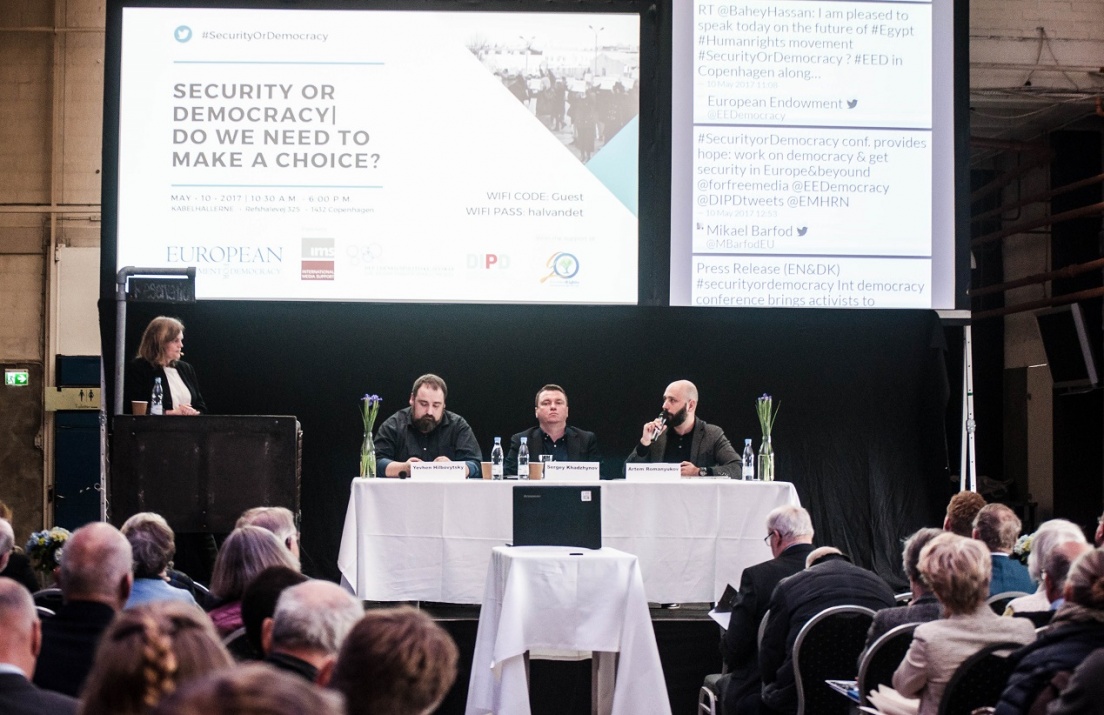 The conference "Security or Democracy | Do we need to make a choice?" brought leading democracy and human rights activists together with players from the political and government, civil society and research arenas. They discussed the struggle and support for democracy in three countries with a key role to play in determining the political future of the European Neighbourhood – Ukraine, Egypt and Syria.

The event was organised by EED in cooperation with International Media Support, Danish Foreign Policy Society and Danish Institute for Parties and Democracy.

Opening the conference, EED Executive Director, Jerzy Pomianowski, noted a significant change of work environment both inside and outside the EU where soft power issues, such as democracy, human rights and free media, have become part of the hard power and international security agenda.

“There is an understanding that the most pressing issues on the political agenda today - the refugee crisis, radicalisation of youth in the Middle East and the threat of Russian disinformation - are closely linked with democracy support programmes EED and many others are doing,” said Pomianowski.

In a bilateral session, Vice-President of the European Parliament and Chairman of EED’s Executive Committee, Alexander Graf Lambsdorff MEP debated the future of values in Europe and beyond with Mogens Lykketoft, Former President of the United Nations General Assembly and Member of the Danish Parliament. Moderated by journalist Anne Sofie Allarp, the speakers touched on a wide range of themes, from the rise of populism to the increasing dangers facing our democratic system of values.

“We need to defend our human rights instruments and their application. That is what has made Europe strong,” said Lambsdorff. “We have much to improve, but, in the eyes of democrats around the world, Europe is still a beacon.”

A series of panels followed, each focusing on one of the three countries in the EU neighbourhood, with grassroots activists highlighting the profound challenges they face and providing an insight into their solution-oriented projects.

With Denmark recently chosen to lead the EU’s programme to fight corruption in Ukraine, the first panel focused on the role of civil society and citizens in ensuring anti-corruption reforms. Speakers included Yevhen Hilbovytsky of the Nestor Group who underlined that the speed of reforms is less important than the sustainability of reforms.

“Democracy is not about having elections, it is about making responsible choices,” Hilbovytsky said. “You have to have debate, free media and a flexible economy. Otherwise the owners of big business become the owners of political debate.”

Sergey Khadzhynov, leader of NGO Automaidan – a civil movement of motorists that stemmed from the famous Euromaidan protest to support the Ukraine’s European integration and counter police assaults against pro-EU demonstrators – pointed to the need to keep the pressure on to fight corruption, “which is endemic in every sphere of life”.

“We discovered that ten vehicles in a convoy draws more attention than ten pedestrians. But a thousand vehicles protesting and blocking streets can paralyse a corrupt government and cause a change of rules.”

The group has since registered as an NGO and continues to press the government to reform and fight corruption in the police, the courts and prosecution agencies.

Panel 2: Egypt | The future of the human rights movement

The second panel looked at the alarming situation in Egypt, where, in recent years, the state has introduced increasingly repressive legislation to curb activities of civil society and human rights organisations.

Panellists, including Director of the Human Rights Programme in the Arab Reform Initiative, Khaled Mansour, discussed ways of supporting continued civil society activity in the light of this unprecedented crackdown.

“The human rights movement is cornered like never before - involuntary disappearance of thousands, confiscation of assets, travel bans, and orchestrated repression of civil society,’’ he said. “However, human rights values continue to spread, and the movement operates with hope."

Director of the Cairo Institute for Human Rights Studies, Bahey Eldin Hassan, explained how “the focus for civil society is now about existence rather than role".

“Human rights defenders cannot move forward without a civil space. Our work is to change politics, to work through political parties, trade unions. But if serrated from the public space our work becomes extremely difficult,” he added.

Panel 3: Syria | Fighting for democracy in the shadow of war

The third panel focused on Syria where the devastating war is now in its seventh year. Despite the drastic situation, civil society activists are continuing their efforts to build their communities and keep the non-violent struggle alive.

Oussama Chourbaji, one of the founding members of the Syrian Non-Violence Movement, looked at the positive lessons to draw from the work with civil society inside Syria. He talked of his work with the AFAQ academy, a training and educational organisation founded by Chourbaji to offer courses in international humanitarian law, peacebuilding, communication skills and community organisation.

This spirit of hope was reiterated by founder of the Badael Foundation, Oula Ramadan.

“Yes, 90% of the infrastructure of Syria has been destroyed but I want to talk about the other side of the picture,” she said. “If we look at civil society, the activism of people at the grassroots pursuing peace, cooperation and better relations, then we should not be worried about the future of Syria.”

“We want to articulate our vision of a new Syria. Our job is to try to universalise the story,” Nachar said. “Syrians are not just refugees. They are normal people.”

"It’s not just resilience vis-à-vis the human disaster, our work is also about future political and social emancipation," he added.

Summing up Lisbeth Pilegaard, Vice-Chair of EED Exectuive Committee and civil society expert, emphasised the need for a more “humble approach” from donors.

“All countries under discussion today obviously face very serious challenges when it comes to democracy and human freedoms. But the fantastic speakers here today have brought hope. One of the key takeaways from this conference is the importance of listening to the voices of people on the ground.”

See all photos from event on EED Flickr page