Celebrating Freedom of the Press at Difference Day 2019

On 3 May 2019, the European Endowment for Democracy co-organised Difference Day, a celebration of the UN World Press Freedom Day with VUB, UNESCO, BOZAR, ULB and other partners. The day, aimed at celebrating freedom of the press and freedom of expression, honoured journalists who have committed their lives to protecting and promoting these values. 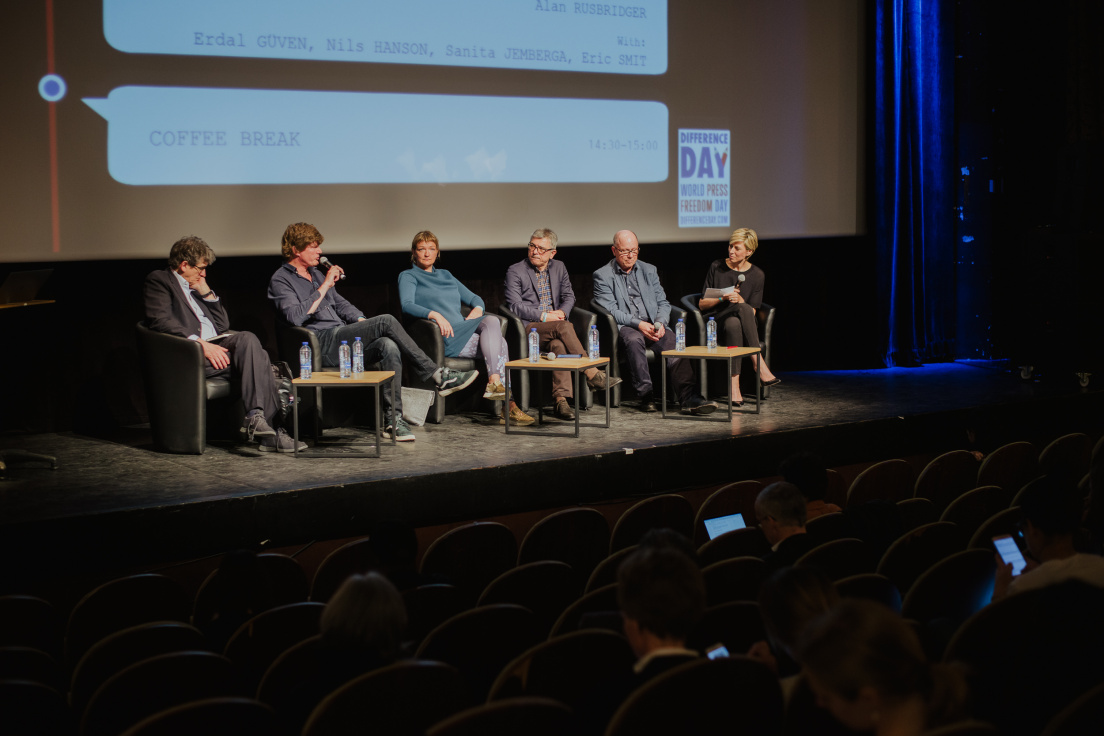 On 3 May 2019, the European Endowment for Democracy co-organised Difference Day, a celebration of the UN World Press Freedom Day with VUB, UNESCO, BOZAR, ULB and other partners. The day, aimed at celebrating freedom of the press and freedom of expression, honoured journalists who have committed their lives to protecting and promoting these values.

This year’s theme ‘Speaking truth to power’, gave way to necessary and thought-provoking discussions on investigative journalism in today’s media landscape as well as the impact of new technologies on the future of journalism.

In her welcoming speech, Louise Haxthausen, Director of UNESCO underscored the urgency in addressing the growing issue of ‘misinformation’ that has permeated the media in recent years adding that, there is a serious need to reinstate readers trust in the media.

“We must support media professionals who are reinventing journalism everyday, finding new methods of investigations through new technologies to hold the powerful accountable,” said Haxthausen.

Alan Rusbridger, former editor-in-chief of The Guardian, then took to the stage with journalists Nils Hanson, Sanita Hemberga, Erdal Güven and Eric Smit for the first panel to discuss emerging trends and challenges faced by investigative journalists.

Rusbridger pointed out that the evolution of the news distribution from “the printing press to the iPhone” has resulted in a shift whereby news outlets no longer possess exclusive power over information. One of the several challenges resulting from this has been finding ways of financing journalist’s work. He explains, however, that “the Guardian and its readers made a choice to be a public good. They pay so that everybody can read it, giving money for the benefits of all”.

Sanita Hemberga, executive director and editor at Re:Baltica emphasised the need to corporate with the public readership to ensure that the stories told are relevant and impactful. “When we do a story we must think of telling the public how and why we are doing it”.

The nature of the limitations experienced by investigative journalists in Turkey is however quite different. Erdal Güven , editor-in-chief of diken.com.tr, shared that there is almost a complete ‘media capture’ by the Turkish government with about 95% of the media in Turkey being under their direct/indirect control, adding that approximately 160 journalists are currently behind bars for reports they have written. Güven stressed that “for investigative journalism to flourish you don’t only need good journalists, you also need an independent and strong judiciary.”

Marianne Bouchart, Data journalist and founder of HEI-DA, commenced the second panel by taking the audience through some of the latest technologies available to journalists including automated journalism, machine learning, deepfakes and artificial intelligence. By referencing some innovative data journalism stories including: ‘GPS Investigation: Secrets of Recycling’ which revealed the mishandling of recyclable items by the Taiwnese government and the ‘Documenting Hate’ - an ongoing project using machine learning to collect reliable data on hate crimes in the US - Bouchart highlighted the ways in which such tools can enhance the work of journalists.

Panellists Olaf Steenfadt, Elina Ravantti, Sabino Metta, Brigitte Alfter shared how such new technologies are being used in their respective areas of journalism.

Brigette Alfter, Director of Arena for Journalism in Europe, pointed out that “cross-border investigative journalism is only possible thanks to new technologies. It helps us get the best out of the data and collaborate with secure connections”.

The emergence of such technologies, however, has also been a cause for concern. ‘deepfakes’, an Artificial Intelligence based technology, are used to produce realistic videos of events that never occurred. As an example, they can be used to create videos of politicians saying things they’ve never actually said. Their misuse could lead to information warfare, or in the words of Bouchart an ‘infocalypse’. Researchers, are developing ways to respond to this by creating widgets that can be used in web browsers to detect fake content.

While such technological developments bring into question who and what sources readers can trust, the panellists agreed that the technology will only be as harmful as its users. Elina Ravantti, Head of Yle Journalism Academy, described the role of humans in new technology as an ‘alliance’ citing Voitto as an example of humans and bots working together to produce content.

In her concluding remarks Ravantti stated “we must share and plant values in robots so they have common values with those humans who control them”.

Relive the event with our photos: