Justice for Life is the only organisation focused on human rights working in the Deir ez-Zor governorate. Over the past five years, the team have documented hundreds of human rights violations in the region.

Even prior to the break-out of the devasting war in Syria, the northeastern governorate of Deir ez-Zor, near the border with Iraq, was one of the poorest in the country and had suffered decades of neglect at the hands of the centralised government. Three years of life under the authoritarian Islamic State (IS) further traumatised and damaged a society already known for its conservatism, with tribes as the main social unit.

Justice for Life (JFL) is an NGO focused on human rights that works in the Kurdish Autonomous Administration the area of the Deir ez-Zor region. Established in 2015 by a group of civil society activists who were part of the 2011 protest movement, the NGO initially concentrated on human rights monitoring and documentation; with IS withdrawal from the region in 2017, it refocused its activities on peace-making and capacity building. Today, JFL is the only human rights organisation working in the governorate, and it has teams both inside and outside Syria.

Building a culture of human rights

Since 2015, JFL has documented hundreds of human rights violations such as killings under torture, extrajudicial killings, disease and malnutrition, and it collaborates with international human rights bodies to report on its findings, including with the Human Rights Council.
EED is now supporting JFL to build on its previous human rights and democracy education programmes to provide for training targeted at women and young people. As explained by JFL’s management, the subject of human rights is a challenging one in Syria in general, and particular in the Deir ez-Zor governorate.

“Human rights are stigmatised is this society as an alien concept that comes from a different culture and that does not fit within our cultural norms. Human rights activists are often young people who have been exposed to ideas from abroad, and they face considerable opposition and threats from all parties to the conflict. As human rights defenders you can’t take sides, and that can make it very challenging to do this kind of work. Don’t forget, things are still very difficult throughout Syria, and particularly in the North-East. The priority is still humanitarian assistance and security,”.

Aware of these challenges, JFL was determined that any human rights intervention had to fit local needs, and they were highly critical of analogous programmes that take no heed of the local context.

They devised a survey that was then sent to over 850 respondents, and they followed this up with interviews and focus groups. They have used the findings of this research to inform JFL’s training programmes.

“Our objective was to explore the local culture and to use it as an entry point for educating people about human rights. We explored the heritage, the ideology and the history of the region. We identified historical figures from the Arabic world who have defended human rights, people who Syrians can identify with, yet they are also people who represent international principles of human rights,” the director explains.

Today, JFL are developing a number of videos explaining the concepts of human rights using simple language easily understood by the local community and taking into account the local mentality, and they are also working on a series of fact sheets on similar themes. 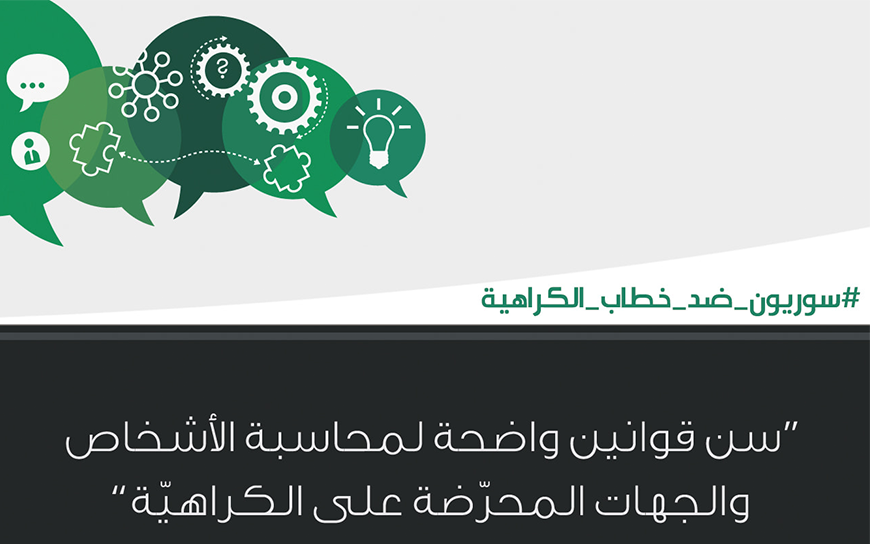 Women and internally displaced people (IDPs), who represent 12 percent of the region’s population, are often the most active groups in human rights education and civil engagement, as they both face particular challenges in this traditional and patriarchal society. A JFL representative explains that it is very difficult for women to play an active role in the social, economic or political life of this society, and many do not believe that women’s empowerment fits with the local culture. He admits it was difficult to come up with appropriate coherent training material that could cover such sensitive topics.

With EED support, JFL is now holding training sessions focused on political empowerment that are being attended by 10 participants over 36 days. The training includes material on diverse topics such as elections and political pluralism, women’s political participation and empowerment, gender roles, transitional justice, human rights and concepts of freedom.

The JFL team are convinced their approach is effective. “We can see how people’s perceptions and opinions change. We can see how participants become more open to change when they are equipped with the knowledge to defend their rights. Of course, in this kind of work, there are no tangible immediate results; you have to work with a long-term focus. But we believe we must continue to strive towards building a future in our country that is based on democracy, civil rights and freedom.”